If we journey back to the days of the Xbox 360 launch, Microsoft was plagued by a myriad of cooling issues with that console. It took many years and a plethora of revisions before the console was somewhat stable in its chassis and the reports of the dreaded RROD seemed to slow. With the latest console release, Microsoft has seemingly took past experience into account and made the Xbox One a smarter console that can detect when it is overheating and speed up the fan, something our PCs have been doing for many years with PWM control.

With all of the above said, Antec which has deep roots in the PC industry, has taken it upon themselves to aide users of the Xbox One that want to add additional cooling capabilities to their console. The X-1 cooler from Antec is a uniquely designed solution that mimics the appearance of the Xbox One and as such fits perfectly to the consoles' aesthetics. The X-1 carries a footprint of 6.5" x 10.5" x 1.25" that allows the solution to fit perfectly front to back on the console. On the top of the unit, you will find Antec branding, along with a small LCD that displays both the ambient air temperature and the exhaust temperature from the Xbox One. 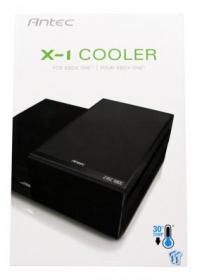 The packaging for the X-1 Cooler carries an image of the solution installed on an Xbox One. To the right, we have a bit of marketing information with Antec saying this solution can decrease temperatures by up to 30%. 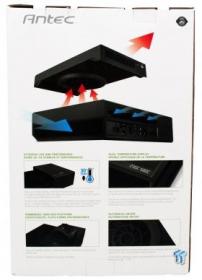 The back of the packaging gives you an idea on how to install the cooler, along with an airflow diagram. Down below, we have additional marketing information, including the automatic on/off feature. 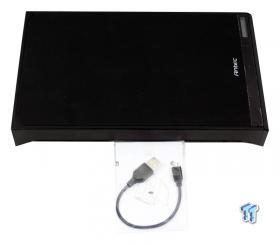 Scope of delivery for this solution was rather simple. As you can see we have the cooler at the top of our image and the short USB cable below. 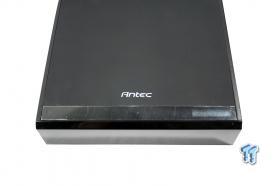 The front of the Antec X-1 carries a logo and the small display as mentioned previously. The top of the unit has a soft rubber coating so there should be no issues with dust and fingerprints.

The rear of the unit houses both the micro USB for the power input and the secondary USB so you don't lose any ports on your console. To the left, we have the large exhaust for the X-1. 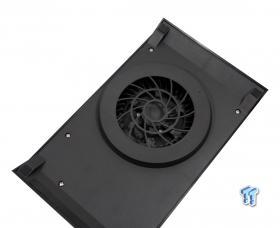 Flipping the Antec X-1 over, we find a large blower type fan similar to those used in video cards. This fan utilizes a fluid dynamic bearing so it is quite silent during operation.

In the image above, we have installed the Antec X-1 on our Xbox One console. As you can see, it fits quite well and the aesthetics are nearly perfect. 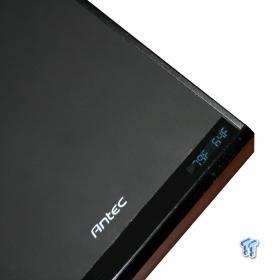 Above, we grabbed an image of the X-1 while in operation. On the right, the display shows the ambient temperature in this case 64F, and to the right, we have a 79F exhaust temperature from the Xbox One. 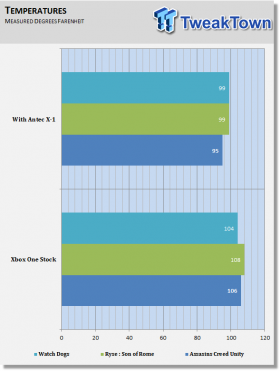 In testing the Antec X-1, we deployed a digital multimeter with temperature probes on the exhaust of the Xbox One. This stayed a constant when using the console with and without the Antec X-1 cooling solution.

In our chart above, we played several games and took temperature readings after 30 minutes with and without the additional Antec cooling solution. Watch Dogs topped out around 104 degrees without the Antec, and with it, temperatures did indeed drop a fair bit down to 99 degrees. With Ryse: Son of Rome, we had 108 without, while adding the Antec cooler netted us the same 99 degrees after 30 minutes. And last but certainly not least, we ran through Assassins Creed Unity and reached 106 degrees with the Xbox One in its stock configuration, then added the Antec X-1 and temperatures did drop all the way down to 95 degrees, the best of any game we tested. 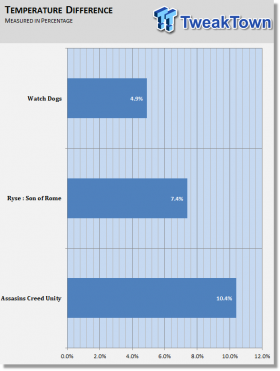 In this second chart, we simply did the math to see how much of temperature difference we gained in each situation by utilizing the Antec X-1 Cooler. As you can see throughout, we gained at the least 5% better temperatures, at the peak we tested up to a 10% decrease in overall console temperature.

For those that want the extra security in knowing that their Xbox One console is sufficiently cooled, the Antec X-1 cooler certainly does provide that extra bit of cooling. In our testing, we didn't reach the 30% mark, but we were able to reach slightly over 10%. Of course, that's not to say this solution isn't capable of reaching that 30% mark, it really just depends on the environment your Xbox One resides in.

To that point, the Antec X-1 does require a bit of heat to switch it on. While testing the solution, we noticed the units' automatic on/off feature didn't trigger the unit to power up the fan until the exhaust from the Xbox One reached 87 degrees, at this point a small blue LED lights up denoting the fan has kicked on.

Build quality of the X-1 is quite good, all of the plastics used in the design fit together quite well, the fan is silent during operation and the small display on the unit is easily readable and fairly accurate when compared to our digital multimeter.

In addition to the Antec X-1 cooling capabilities, this unit also allows you to place your controllers, headset and accessories on top of the Xbox One without worrying about blocking the exhaust port of the console, aiding those who have limited space.

PRICING: You can find the Antec X-1 Cooler for sale below. The prices listed are valid at the time of writing but can change at any time. Click the link to see the very latest pricing for the best deal.

The Bottom Line: While we haven't heard of any cooling issues with the Xbox One, the Antec X-1 does hold a certain amount of value for those wanting to be on the safe side with their console.