Seemingly immediately since the conclusion of the last World War in 1945, the huge effects have proved ample storytelling opportunities for Hollywood, over numerous genres, including gripping dramas such as Saving Private Ryan, comedies in 1941, alternate realities in The Final Countdown and Inglourious Basterds, classic blockbusters such as The Great Escape and The Great Escape and misguided efforts such as Pearl Harbor and U-571. So where does the latest Hollywood depiction of WWII fall?

In the dying months of the war, a Sherman tank dubbed 'Fury' is pushing forward through occupied German territory, rounding up the pockets of resistance who have pulled back to central Germany. Led by 'Wardaddy' (Brad Pitt), who has returned from an extended deployment in Africa, and his close knit team of 'Bible' (Shia LaBeouf), Gordo (Michael Peña), Coon-Ass (Jon Bernthal), the team have fought poor living standards for years, having lost their humanity after years of relentless battle.

When the teams assistant driver and gunner is killed in battle, and is replaced with the very green Norman (Logan Lerman), so green in fact, that he's never seen the inside of a tank, let alone participated in war. With apprehension and a little suspicion, the team need to quickly induct Norman if they want to make it through the war.

There is no doubt that Fury is a well-staged, punishing and gritty portrayal of war, which frequently graphically and emotionally slaps the viewer right across the face. A far cry from some of the more sanitised war movies that you might have seen, Fury seems content to revel in the brutality of it all, although never arbitrarily so.

The cast, led by Brad Pitt - at least on the banner, but in reality is the young Logan Lerman is generally quite good. Much has been made by the extremes that Shia LaBeouf went to in order to portray his character, although his efforts were probably overkill. One of the films standout sequences, at least from an acting perspective; an extended sequence at the home of two German women in a captured German town is played to wring as much discomfort as possible, but allowed to continue for far too long. At 134 minutes long, the material is probably stretched out 20 minutes too long and some judicious editing would have had a positive effect.

However, the films biggest single problem with the film is that even whilst it makes an admirable attempt at making the protagonists earnestly, relatable and sympathetic (even through their horrific acts of war) short of the character Norman, they're routinely boring, un-relatable and particularly John Bernthal's character, painfully hard to understand their dialogue.

Director David Ayer, calling on his prior experience in the U.S. Navy and personal interest historical military doesn't pull any punches and wanted to bring a realistic and very specific vision to the screen. Overall, I'd say he's been pretty successful in this endeavor. But that doesn't make it a necessarily entertaining, nor accessible film. 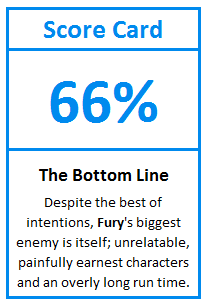