Enermax is widely known for their range of power supplies and chassis, but not so much their storage accessories. With that being said, Enermax has recently launched one of their first storage solutions, the EMK3201.

The EMK3201 is a dual-bay 2.5" enclosure that allows installation of two HDD or SSD in a standard 3.5" form factor. This bay solution supports both SATA and SAS standards with a 50K cycle guarantee. The front of the unit houses both security lock and activity LEDs for both bays, while being compatible with Windows and Mac OS 9+. 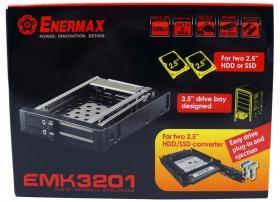 Packaging for the EMK3201 carries an image of the enclosure on the front. 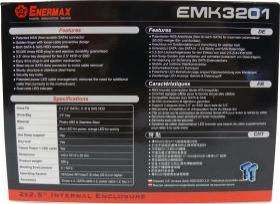 The back of the packaging offers a few details about the enclosure. 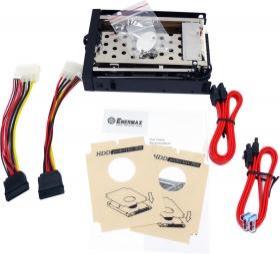 Scope of delivery for the EMK3201 includes power adapters, SATA cables, along with reading materials, and drive protection film. 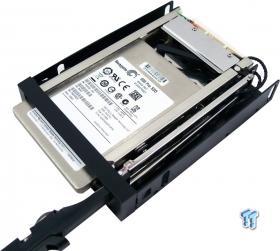 The backside of the enclosure houses SATA data and power connections, along with a four-pin setup for the activity LEDs.

The front of the enclosures houses both drive trays of which each has a security lock. To the right side of the trays, you will find the activity indicators for each drive. 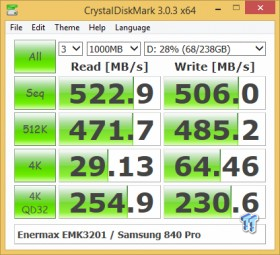 To check that the Enermax doesn't cause any performance loss, we installed a Samsung 840 Pro SSD in the enclosure. As you can see, the drive performed with no performance loss, reaching 522 MB/s read and 506 MB/s write.

The Enermax EMK3201 is a great solution for those wanting to clean up or add multiple 2.5" hard drives or SSDs in a single 3.5" bay. The build quality is quite possibly the best I have seen for a solution such as this, with stainless steel construction wrapped in durable plastics.

In addition to this, the EMK3201 is the first solution I have seen where the vendor actually includes protective film for HDDs to mitigate any issues there. The activity LEDs, while being bright enough to see, aren't so bright to where they light up a room or blind you.

In our testing, the EMK3201 introduced no performance loss as our Samsung 840 Pro SSD was able to reach 522 MB/s read and 506 MB/s write, just as it did when connected directly to our SATA 6Gbps port on the motherboard itself.

PRICING: You can find the Enermax EMK3201 for sale below. The prices listed are valid at the time of writing but can change at any time. Click the link to see the very latest pricing for the best deal.

The Bottom Line: Given its price, the Enermax EMK3201 is one of the best dual-bay 2.5-inch solutions on the market. It carries ample build quality without any hint of performance loss with support for SATA and SAS drive solutions.