Feature film adaptations of video game properties have been fertile ground for Hollywood since 1993's Super Mario Bros, although with the loose exception of a few, including the first Resident Evil and The Prince of Persia, they're generally ill advised. So my only real surprise in hearing that Electronic Art's Need for Speed franchise was getting a feature film adaptation, was how long it took to happen. Imagine my even bigger surprise when it turns out to be quite a decent film in its own right.

When ex-racer Tobey Marshall (Aaron Paul) is offered a deal by arch-nemesis Dino Brewster (Dominic Cooper) which will secure the financial future of his near bankrupt garage business, Marshall reluctantly accepts the offer. When the deal inevitably goes sour with Marshall framed and behind bars for the manslaughter of his friend and colleague Pete (Harrison Gilbertson), he jumps at the opportunity to not only get back in the racing game but also clear his name. However to do so, he'll need the help of his friends, including car dealer Julia (Imogen Poots) and be prepared to break more than a few laws in the process. 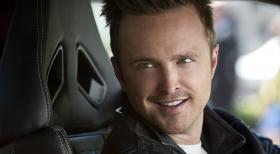 Muscling in on territory seemingly cornered by the Fast and the Furious franchise, as it turns out Need for Speed features precious little in common with the gaming franchise, but this has freed up the filmmakers to fully reimagine the world without the shackles of unnecessary fan service and pre-established characters. To this end, they've created a fun story which I believe not only captures the fun of the game series, but also provides enough of a dramatic edge to also be taken semi-seriously.

If anyone has caught more than a few minutes of Breaking Bad's Aaron Paul, his impressive acting chops will come as no surprise. Whilst the material here doesn't stack up to the impressively slow burning Breaking Bad scripts, he does the best he can with the pages, carving out a wholly believable figure under pressure. Suitably impressive too is Imogen Poots as the front seat driver who becomes increasingly charming (and attractive) as the film progresses. The couple has palpable chemistry together, making it very hard to not root for the duo as the plot thickens.

Still, the real star of the Need for Speed is the racing sequences themselves and they are truly impressive - refreshingly far more realistic than that offered by that other racing franchise. Even more remarkable is the apparent fact that no computer graphics were employed in their visualization. Make no mistake - this is old school car racing thrills and spills which channel the likes of classics like Smokey and the Bandit and Bullitt - both of which are referenced throughout, by no coincidence I'm sure.

Need for Speed is presented in the original theatrical aspect ratio of 2.40:1.

Filmed digitally with Arri Alexa cameras and mastered at 2K resolution, Need for Speed looks near flawless in its Blu-ray debut, as one would naturally expect for a production of such vintage.

The bright and pleasingly contrasting photography from Shane Hurlbut, coupled with the overwhelmingly in-camera effects shots, gives the film a real glossy sheen which translates very nicely to the small screen. The image is sharp and clear at all times, with the exception of a few brief shots captured with obviously lower resolution GoPro cameras. Colors are extremely bold and brilliant, with the primary colors of the hero (and villain) cars really jumping off the screen.

This is a stunningly good transfer from Disney, and one that will automatically go to the demo worthy shelf when visitors come over and want to see an impressive disc. 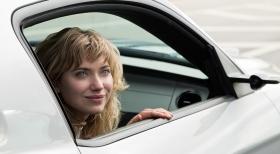 Need for Speed is presented in DTS HD Master Audio 7.1 at 24 bits.

A perfect accompaniment to a brilliant video transfer is the equally stunning aural experience, which is just as souped up as any of the cars in the movie.

The surround mix is a real tour de force, showing of the entirety of modern mixing techniques to provide an aggressive, wall and bone shaking mix that just itches to be pushed just a few decibel more. It's hugely satisfying to hear the engines scream from all channels, with a suitable grunt emanating from the subwoofer channel. Even some of the quieter (dialogue) segments don't lose the surround mentality, with a convincing ambience maintained at all times.

This is now, without doubt, my new demo Blu-ray disc. Until the next one comes out. 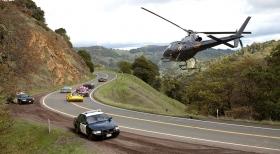 Need for Speed comes to disc with a standard collection of extra features, which balance genuine behind the scenes stories with some of the more promotional aspects. Let's take a look.

First up is an Audio Commentary with Director Scott Waugh and actor Aaron Paul which is reasonably engaging, with the pair offering equal parts self-congratulation ("Isn't that great", "I love this shot" etc.) and production stories. The two are pretty affable, but only the most dedicated of fans will sit through it in totality.

Next we have a number of featurettes, including Capturing Speed: Making an Authentic Car Movie which looks at filming vehicle sequences overwhelming in camera, which represents at the intricate logistics over cheating with CG, while Ties that Bind reveals in the multiple generations of screen veteran dynasties that coalesced in production.

The Circus Is in Town takes a look at the production as it travels from location to location, with half a dozen vehicles and hundreds of crew in tow. Perhaps the best featurette; The Sound of Need for Speed gives some illuminating background into how a modern action film is mixed, especially relevant since the track is so accomplished.

Next, we have roughly 5 minutes of Deleted Scenes and a short Monarch and Maverick Outtakes compilation, which is sadly not as riotous as one would anticipate.

Finally, we have a 'Need for Speed Rivals' promotion, but sadly no trailers for the movie proper. 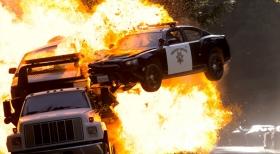 PRICING: You can find the Need for Speed [Blu-ray] for sale below. The prices listed are valid at the time of writing but can change at any time. Click the link to see the very latest pricing for the best deal.

Canada: The Need for Speed [Blu-ray] retails for CDN$26.99 at Amazon Canada.