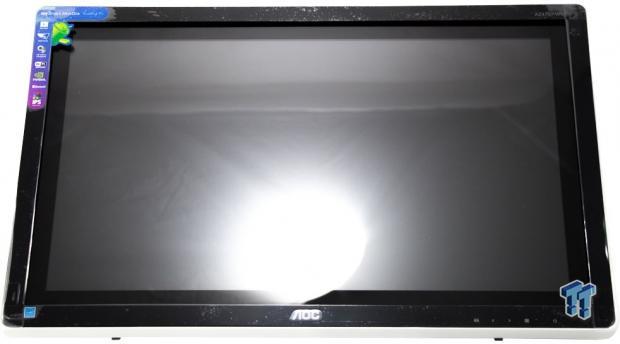 Today in the labs, we have another specimen from AOC. This specific 24-inch-class monitor is a bit more unusual than most. It mates an Android tablet to a touch-enabled IPS screen that pumps out Full HD. You're probably wondering why this is a monitor review?

Well, the all-in-one Android system also supports HDMI in and D-SUB (VGA) in, making it a monitor as well. Just how well does it work? We're about to find out!

The A2472PW4T (from here on out, A2472) is a 24-inch LCD widescreen display set in a picture frame. The panel features the standard 1920 x 1080 resolution that most have come to expect from a monitor of this size. The panel is an IPS display, which is almost a must for any sort of Android system--note: I won't be calling it a tablet as it does not have a battery and is not very portable--and viewing angles are especially good.

The display, because it is a touchscreen, is covered in a glass panel, making it glossy and very reflective. The stand for the all-in-one is simply a flip out kickstand. As far as inputs go, it features just an HDMI and D-SUB (VGA). It also sports a USB 2.0 hub, allowing you to use your mouse and keyboard for both the Android system and your Windows desktop.

It features a built-in webcam (720p) and microphone with echo cancellation. Internally, it sports two 2W speakers, allowing Android to play sounds, notifications, and audio associated with apps and videos. It also features Wi-Fi 802.11b/g/n and a 10/100Mbps Ethernet port for connectivity.

Moving to the Android system specs, we can see that it utilizes Android 4.2. Driving the Android system is an NVIDIA Tegra T33 quad-core processor clocked at 1.6Ghz. It features 2GB of DD3 RAM and 8GB of eMMC built-in storage. You can expand the internal storage through the use of an SDHC memory card.

PRICING: You can find the AOC A2472PW4T for sale below. The prices listed are valid at the time of writing but can change at any time. Click the link to see the very latest pricing for the best deal.

As far as packaging goes, the A2472PW4T was shipped inside of a highly decorated box, much like the other AOC monitor that we recently reviewed. The box covered some of the more important aspects, including the Android system and monitor details. 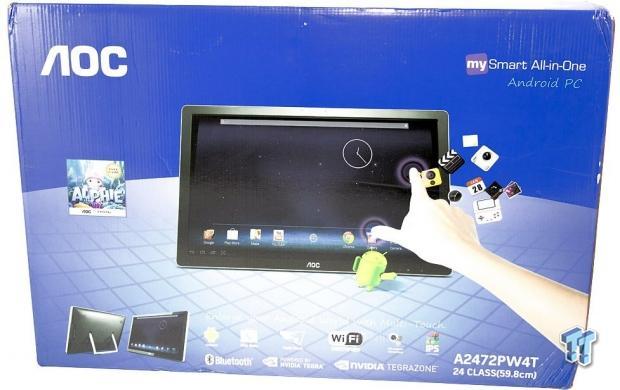 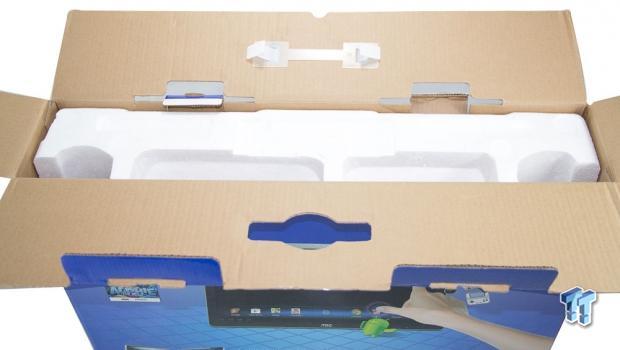 Below, you can see everything that was included in the box (aside from the monitor itself). 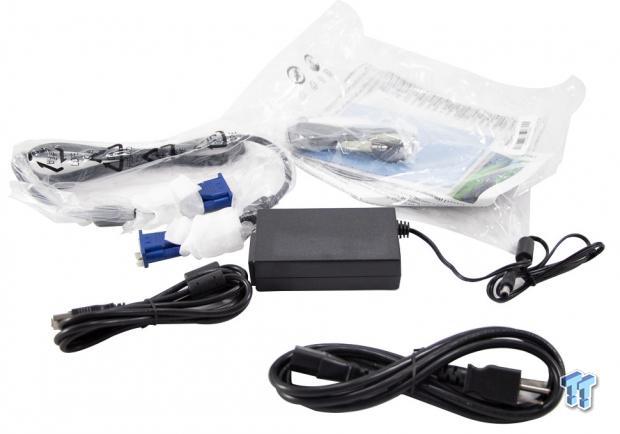 The system requires absolutely no assembly. Simply plug in the various cables and you are good to go.

You can see in the pictures below the layouts of the ports.

From left to right (in the picture, opposite when viewed from front of monitor), we find the Ethernet port; USB in for the touchscreen and the hub; the SDHC reader; the power port; the HDMI in port; and the D-SUB (VGA) port. These are located along the bottom edge of the monitor.

On the left side of the monitor (pictured in the image above, right), we have a micro-USB port; the two USB 2.0 ports; and a couple of audio jacks (audio in and out). 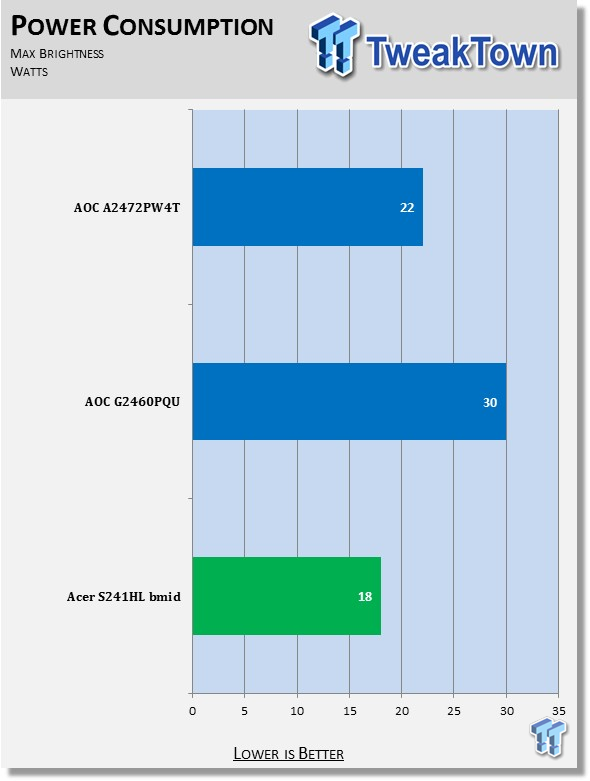 The A2472PW4T used 22 watts while on full brightness with a Word document open. Compared to the other monitors in the chart, it sits in between the other two monitors we've reviewed, and it is closer to the bottom monitor than to the top monitor.

We use an LX1010B light meter to measure brightness in Lux. The monitor is placed in the center of the screen on a blank Word document with the monitor at full brightness. 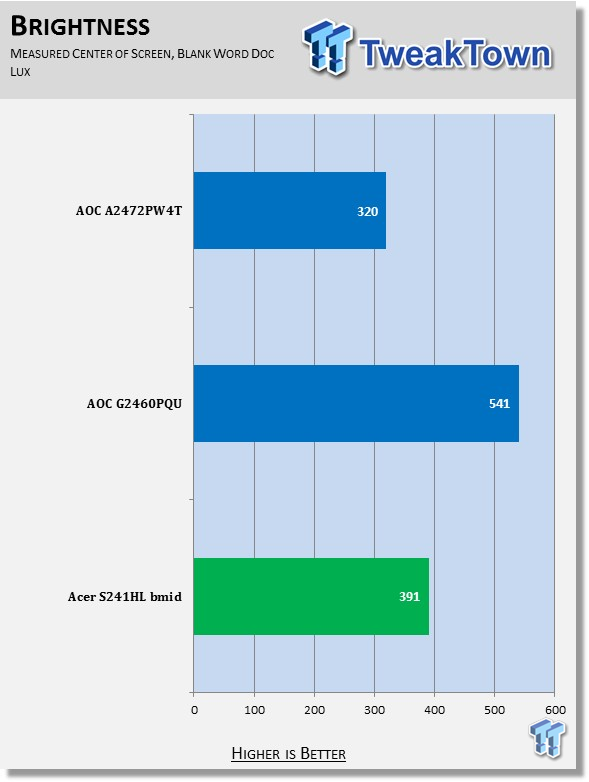 Despite consuming more electricity than the Acer monitor, the A2472 produces less light. This could be due to the Android system running in the background or the IPS panel. Either way, the A2472 produced just 320 Lux of light. 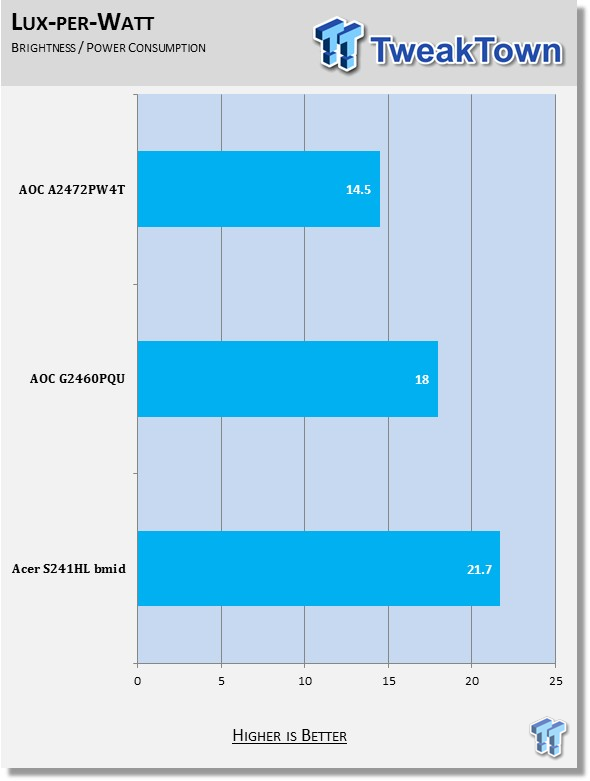 As you can see above, the A2472 suffers miserably in our efficiency test, producing just 14.5 Lux-per-Watt.

We're going to split out our opinion on the Android all-in-one system from the monitor final thoughts, which will be on the next page. Right now, we're going to discuss the uses, the pros, and the cons of having an Android system built into your monitor.

The Android system is actually quite capable since it's powered by 2GB of DDR3 and an NVIDIA Tegra quad-core processor. For a simple (and unfair) comparison, we ran Futuremark's Peacekeeper browser benchmark on the Android system and on my desktop PC (i7-4770K). The Android system scored 746, which is behind the iPhone 5 and iPad (fourth gen), both which scored in the 900s. My desktop scored 4393.

Some of the uses for this system include surfing the web, watching Netflix or Hulu, and playing Android apps. The benefits that extend from these use cases include power savings and speed of system boot. Surfing the web on the Android system works well, and Netflix videos play just fine.

Overall, the system mates quite nicely to the monitor. I do wish there was a quicker way to switch between monitor mode and the Android system, but there doesn't seem to be. Currently, you have to push the input selection button several times until you either reach the desired input or Android system, and then you have to push a separate button to select.

We've covered the hard facts, and we've covered the Android system, so now let's get down to business and cover the monitor aspect, which is the main reason we have it here in the labs.

One of the main things I noticed is the monitor seems to have a lack of sharpness. The edges of the text of this review (typed on the monitor) seem to blur out and be soft. My background picture also seems to lack some of the sharpness in comparison to my other two monitors. This could be due to the brightness or the use of the IPS panel.

As noted in the Android section, I'd like a better way to transition from the Android system to the active monitor input. I'd also like to see physical buttons instead of touch sensitive ones for the on-screen menu (OSD).

The monitor does have great viewing angles, thanks to the use of the IPS panel. However, since it features a touchscreen, it does come with a glossy screen, which makes reflections very easily. During its photo shoot in our lab, I had to figure out a way to counter those nasty reflections.

If you're looking to buy this as a gaming monitor, I would easily give it the pass for something like the 144Hz AOC monitor we recently reviewed. However, if you're looking for something to use as a day-to-day monitor and want to be able to surf the web, watch Netflix, and perform other tasks without firing up the main PC, then this monitor has a very good place in your home.

We found the monitor online for around $400, but current market pricing can be found below. We're going to go ahead and use that $400 mark as our discussion of value. Based on the fact that most Android tablets in the same performance class as this are going to cost you a minimum of $200, we feel the asking price of $400 is reasonable, especially considering you get an IPS panel.

PRICING: You can find the AOC A2472PW4T for sale below. The prices listed are valid at the time of writing but can change at any time. Click the link to see the very latest pricing for the best deal. 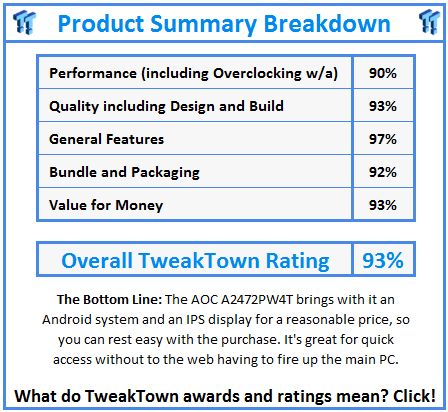