It's not been a good few years for Disney Animation creatively nor financially, with competition provided by the likes of Blue Sky and DreamWorks animation studios nipping at its heels and the company's best attempts in Tangled and Wreck It Ralph were solid, yet comparatively unspectacular features, failing to reach the heights of the now famed Disney Renaissance of the 80's and 90's that gave us consecutive hits in The Little Mermaid, Beauty and the Beast, Aladdin and The Lion King - shadows which loom large over the company. 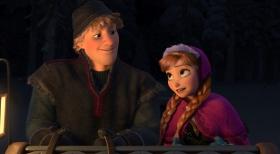 But last year's Frozen successfully altered the studio's fortunes, grossing $1.2 billion at the box office (now the sixth highest grossing film of all time) and scoring two Academy Awards and giving new confidence to the future and direction of the company.

When young Princess Elsa (voiced by Idina Menzel), blessed (or cursed) with the conjuring power of ice, accidentally injures her younger sister Anna (voiced by Kristen Bell), her parents, the King and Queen of Arendelle, decide to separate the sisters until Elsa can properly manage her powers. Years pass, as do the King and Queen and the Kingdom falls to Elsa. On the event of her coronation, an argument causes her to inadvertently unleash her powers, undoing the years she has spent in hiding. Abandoning the city to a perpetual and inhospitable winter, Anna flees to live in isolation in an ice palace she has constructed, leaving Anna to assemble an oddball delegation to convince her to return.

After hearing all the hype and good reports on Frozen, I'd lowered my expectations out of fear of disappointment. How wrong was I. Frozen is undoubtedly the best Disney film since Fantasia 2000 15 years ago, an uplifting adventure with relatable characters, rich in laughs, great songs and new Disney characters.

Frozen is presented in the strange aspect ratio of 2.24:1, which represents a widening of the mattes from the original 2.40:1 aspect ratio.

Unsurprisingly, Frozen is a near perfect, 2K direct digital transfer which for all intents and purposes is probably pretty close to what audiences saw projected onto cinema screens, just compressed onto much smaller displays. Frozen is an animation powerhouse, filled with beautiful images such that you can pause on any frame just to marvel at the work that's gone into it. The image is crisp and clear and razor sharp, however it's worth noting that some shots intentionally appear a little soft for artistic purpose. Colors are truly spectacular, with a huge wow factor.

Pleasingly, I didn't detect any macro blocking or other artifacts - it's simply as good as Blu-ray gets. That said, I can't help but feel how it would look in native 4K, although I suspect it would upscale quite nicely too. 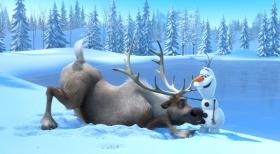 Frozen is presented in DTS HD Master Audio 7.1 at 24 bits.

Right from the outset, it was pretty clear that Frozen was going to sound the goods, with an incredibly aggressive 7.1 mix that really works the rear surrounds for maximum immersion. The data rate remains sustained at a generous 5 mbp/s, offering unmatched clarity that only the best amplifiers and audio equipment can truly capitalize on. Still whatever equipment you have, Frozen will take full advantage of it.

Dialogue is rendered well and lip-synced appropriately, supported by a strong front soundstage, which is forceful when appropriate. The track features a number of musical numbers which harken back to the fusion of powerful lyrics and compositions of Howard Ashman and Alan Menken. These are showcased well and mixed appropriately for maximum impact.

The low frequency is deep and resonating, supporting a number of characters and action sequences, including the ice monster. 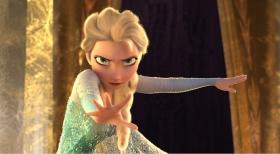 It's a bit of a surprise that the Blu-ray debut of Frozen is light on for extra features, although the rumor mill points to a potential fourth quarter special edition re-release. Whether that comes to pass is unknown at this point, but for a film of such stature and new found importance to the company, I'd be willing to bet its accuracy. Still, let's take a look at what is included in the initial release.

First up is the animated short that accompanied Frozen's theatrical release, Get A Horse! which breaks the fourth wall and reunites audiences with Mickey and Minnie Mouse in a new short that merges new animation with old. It also happens to be hugely entertaining and a lot of fun. It's also nicely presented in pristine 1080p HD.

The three minute featurette The Making of Frozen turns out to be nothing what the title would seem to indicate; serving as a cute behind the scenes musical number featuring the cast and crew. Unfortunately, the absence of a proper 'making of' documentary makes this come off as a little insulting.

The seven minute D'Frosted: Disney's Journey from Hans Christian Andersen to Frozen skims over the previous aborted attempts to translate the Danish authors story "The Snow Queen", including touching on the previous adaptation of his work in 1989's The Little Mermaid.

Next are four Deleted Scenes which were all cut in the storyboard process and would have inconsequently padded the film out by a few minutes, introduced by writer director partners Chris Buck and Jennifer Lee who explain the excision.

Finally, we have a Let It Go Music Video by Demi Lovato, along with three other language tracks, and the Original Theatrical Teaser in 1080p. 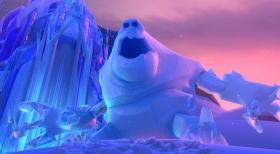 PRICING: You can find the Frozen Blu-ray for sale below. The prices listed are valid at the time of writing but can change at any time. Click the link to see the very latest pricing for the best deal.

United States: The Frozen Blu-ray retails for $25.89 at Amazon.

Canada: The Frozen Blu-ray retails for CDN$27.99 at Amazon Canada.