Despite critical indifference to the first new film from the Lord of the Rings juggernaut in nearly a decade, The Hobbit: An Unexpected Journey nevertheless pulled in an impressive billion dollars at the international box office - well and truly earning back the production costs of all three entries. This time around fans have an expectation that Desolation of Smaug would hit it out of the park, and although it's far from a home run, it does make definite improvements over the last. 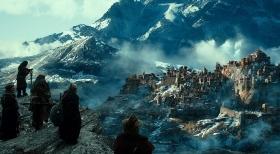 The Dwarf fellowship led by the Hobbit Bilbo Baggins (Martin Freeman) continues on their quest to liberate the Lonely Mountain from the conquest of the greedy dragon Smaug (voiced by Benedict Cumberbatch) and return the Arkenstone to the dwarves. Their quest is made all the more difficult by the band of mercenaries led by the Orc Azog, who track them throughout the lands, including the hallowed ground of the Elves.

New friendships are forged, including the Bard (John Bell) and even a blossoming romance, but a new and extremely powerful force reveals itself to the wizard Gandalf (Ian McKellen), who will bend Middle Earth to his evil will.

The key cast return once more, although a little emphasis is shifted away from key characters such as Bilbo and Gandalf, whilst totally absent is the villainous Gollum, who proved a highlight of An Unexpected Journey and helped to strengthen the links to the original Lord of the Rings trilogy.

Still, the dragon Smaug picks up some of the slack, voiced impeccably by Benedict Cumberbatch, whose Hollywood stock continues to rise rapidly. Smaug is an interesting character that might lack subtlety, but more than makes up for in sheer impressiveness and threatening behavior. The inclusion of the Elven warrior Tauriel (Evangeline Lilly), a Jackson concoction that didn't exist in the original Tolkien story might upset some of the purists, however it does serve to provide some much needed cross sex appeal.

Some key sequences including a rousing win barrel escape down rapids and a rerun of the memorable spider attack from The Two Towers are hugely compelling, and exceed the highest heights of An Unexpected Journey. It's pretty clear that Peter Jackson worked hard to rectify some of the complaints levelled at An Unwanted Journey, eschewing needless fat and producing a leaner, more restrained edit, alongside a beefier story that's filled with a lot more action. 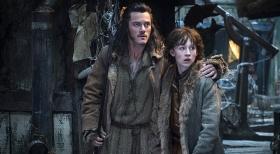 The Hobbit: The Desolation of Smaug is encoded with AVC MPEG-4 compression and presented in the intended aspect ratio of 2.40:1.

Filmed digitally on RED Epic cameras at 4K resolution and 48FPS before being finalized in a 2K digital intermediate, The Desolation of Smaug certainly looks good at 2D 1080p, but represents a slight downgrade from Director Peter Jackson's preferred version.

I criticized the visual look of An Unexpected Journey following last year's Blu-ray release, which looks rather video-like compared to the more gritty and cinematic transfers offered to the Lord of the Rings. WithThe Desolation of Smaug, we do get more of the same, but I'll point out that this is no fault of the transfer and accurately reflects the theatrical presentation.

Unsurprisingly, the image is the very model of digital perfection, with nary a hint of a blemish marring a flawless presentation. Every frame is a smorgasbord of finely resolved detail, with every color digitally graded to precision. I do have one complaint however, and that's the decision drop in a few obviously lower resolution shots during the barrel ride sequence, which were probably shot with Go-Pro like cameras. Their inclusion is jarring and distracting and should have been left out. 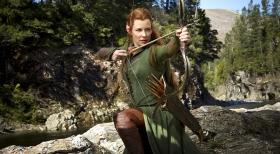 The Hobbit: The Desolation of Smaug is presented in DTS-HD Master Audio 7.1, at 24 bits.

Even more aggressive than the track afforded to An Unexpected Journey, sound mixers have thrown in the proverbial kitchen sink and all the tricks of the trade to craft a hugely immersive mix which will most certainly pleased home theatre aficionadas.

Dialogue is crystal clear throughout, neither suffering from sync issues, nor obvious post production recording. The surround channels are always actively engaged, especially so if you're lucky enough to sport a 7.1 configuration. The bass channel holds back precious little, most notably during the climactic battle with Smaug. 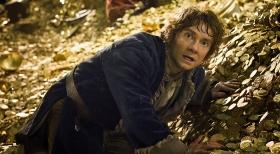 Warner Brothers continue to follow the same release schedule as that of Lord of the Rings, that is; an initial theatrical release with a basic suite of bonus features, before the release of a lavish 'extended cut' edition with hours upon hours of behind the scenes material and audio commentaries. Still, this initial release has more generous and revealing features than as before, so let's take a look.

First up is the two part, 40 minute long Peter Jackson Invites You to the Set featurette, which is cut as a fly-on-the-wall behind the scenes look, going through a typical day on the set and visiting the many departments and hands that make The Hobbit work.

Next are a selection of four brief Production Video featurettes, which were originally produced for online distribution. It's a bit disappointing we couldn't have the other 11 or so that were produced as well, especially when there is around 10GB of data unused on the single layer extra features disc.

The 38 minute long Live Event: In the Cutting Room featurette is a 2013 recording of a Peter Jackson online event where he answered fan questions. I imagine it would be pretty cool for those fans who participated to have their interactions with the famed director recorded for eternal posterity, and in HD no less.

The New Zealand: Home of Middle-Earth: Part 2 featurette is a brief, seven minute feature which takes a look at returning the production to the rolling hills of Wellington, including the more permanent sets which can be utilized by the burgeoning Lord of the Rings tourist trade. I understand the inclusion of the featurette was stipulated by the New Zealand Government in order to qualify for the multi-million dollar tax breaks that the production was gifted.

Finally, we have three Theatrical Trailers presented in 1080p with 5.1 sound, and the I See Fire Music Video by Ed Sheeran.

PRICING: You can find the The Hobbit: The Desolation of Smaug Blu-ray for sale below. The prices listed are valid at the time of writing but can change at any time. Click the link to see the very latest pricing for the best deal.

United States: The Hobbit: The Desolation of Smaug Blu-ray retails for $22.96 at Amazon.

Canada: The Hobbit: The Desolation of Smaug Blu-ray retails for CDN$29.99 at Amazon Canada.

Australia: The Hobbit: The Desolation of Smaug Blu-ray retails for $34.99 AUD at Mighty Ape Australia.

New Zealand: The Hobbit: The Desolation of Smaug Blu-ray retails for $39.99 NZD at Mighty Ape NZ.