Although it wasn't major news in Australia, in 2009, American news networks went crazy for the true story of Captain Richard Phillips, after his container vessel was boarded by Somali pirates and he was taken hostage for days on a tiny enclosed life boat. The following year, Phillips published his story in A Captain's Duty, which serves as the basis for this dramatization. 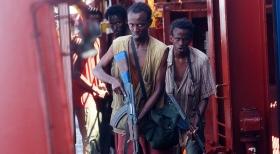 The Maersk Alabama and its captain set off from the Gulf of Oman with a routine consignment of freight when Phillips was alerted to the presence of active pirates operating in the area, intelligence that he neglects to share with his crew. When a crew of Somali pirates decides to target the Alabama intent on capturing a vessel and holding its crew for a substantial ransom, a game of cat and mouse entails, which leaves the ship defenseless in the open water, with nothing to trade but their lives.

Captain Phillips is a gripping, edge-of-the-seat thriller, which despite the outcome being reasonably obvious, nevertheless does not let up for its two-hour duration. Director Paul Greengrass, a reliable and accomplished director with an interestingly eclectic filmography, directs Captain Phillips with both style and gritty realism. 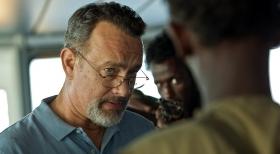 Captain Phillips is encoded with AVC MPEG-4 compression and presented in the intended aspect ratio of 2.40:1.

Utilizing a combination of film and digital stocks, heavy digital grading, and significant stretches of "night for day" shooting, it's a wonder how Sony got this film looking so great, let alone consistent. Mastered at 4K resolution and downscaled to 1080p, Captain Phillips looks rather marvelous, with a pleasing amount of fine detail visible in every shot, be it the cold sheen of brushed metal or the sweat of a brow. Color balance is good, even eye popping at times.

With almost the second half of the film taking place in darkness, it's reasonably obvious that the digital grading has skirted between boosting contrast to avoid black crush and attempting to diminish noise and grain. Whilst the odd shot has what I would term "heavy grain," probably due to a manufactured push in, overall, this is very well handled. 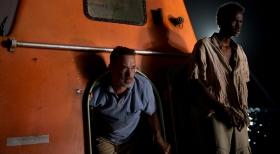 Featuring a powerfully resonating track that sound designers have tailored to place the viewer smack bang in the thick of the action, Captain Phillips comes to Blu-ray with an impressive track that exceeds expectations.

I did have to concentrate a little harder than usual to pick up a few lines of dialogue, but I'm willing to put this down to intention rather than flaw. The front soundstage handles most of the action; however, there is a huge amount of rear separation and directional effects.

The low frequency track is very powerful indeed. Probably too powerful. I had to turn down one of the subwoofers that is set to reference levels because it was simply too overbearing. Your experience may differ. 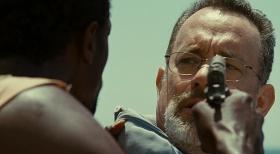 From the outset, it looks as though Sony went a little light on special features with Captain Phillips, but digging in a little proves that's certainly not the case at all.

First up is an Audio Commentary featuring Director Paul Greengrass who rides the track solo and provides some useful and not so useful information, with infrequent gaps in between. Greengrass is not the most engaging commentator of all time, but from a sheer 'film school' perspective, you could do much worse than listen to his thoughts.

Next is the nearly hour long Capturing Captain Phillips, which is split over three logical features. This is a really fascinating feature that first looks at the real life event, extrapolated by news footage from the day, the memoirs that inspired the movie, and the development of the script and filming on the high seas--no CG here, folks. I was particularly interested to see footage of the film's finale, which was apparently filmed unscripted, which just goes to show how talented Tom Hanks and his co-stars are.

PRICING: You can find the Captain Phillips Blu-ray for sale below. The prices listed are valid at the time of writing but can change at any time. Click the link to see the very latest pricing for the best deal.

United States: The Captain Phillips Blu-ray retails for $22.30 at Amazon.