After surpassing 50 episodes from the first two seasons, the tone and tenor of Adventure Time should be clear to all who have caught even a few minutes of the colorfully zany animated offering, which is loved equally by kids and adults alike for its 'out there' plots and bizarre humor. 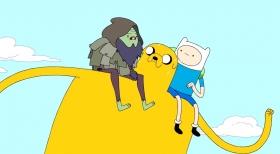 Revolving around the young boy Finn (voiced by Jeremy Shada) and his shape shifting canine companion Jake (voiced by John DiMaggio), Adventure Time follows their endeavors in a strange, post-apocalyptic landscape, filled with weird and wonderful denizens and eclectic characters, including the twisted Ice King (voiced by Tom Kenny) and the sometime love interest Princess Bubblegum (voiced by Hynden Walch). The third season includes a further 26 twelve minute episodes that are easy to enjoy, but a little harder to comprehend--but I'm not sure that's the point.

It's perhaps worth noting that this disc, just like its season predecessors, are exact duplicates of the U.S. release discs produced by Cartoon Network partner Warner Bros. 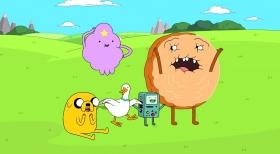 Adventure Time: The Complete Third Season is encoded with VC1 MPEG-4 compression and presented in the intended aspect ratio of 1.78:1.

Despite its relative simplicity, the animation of Adventure Time shines ably in high definition. A bright and bold color palette that can only be described as eye popping, with good contrast (albeit probably a nudge too high), serves to heighten the bizarre forms on screen. Similar to the first two seasons, the deficiencies of the series are mild, with the odd occurrence of aliasing on some of the sharper lines. I didn't notice any macro blocking; indeed the compression seems rather good taking into account the inclusion of around five hours of HD footage on just one disc.

Overall, this is a perfectly fine transfer, which suffice to say blows the standard definition DVD and television broadcasts away. 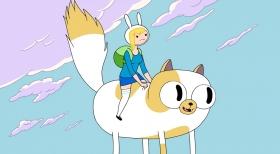 Adventure Time: The Complete Third Season is presented in Dolby Digital 2.0 at 192 kbps.

It's a bit of a shame that the show is only afforded a stereo soundtrack, not even provided in a lossless format, but it's hard to be too disappointed. This is a perfectly acceptable track that does have a reasonable, even surprisingly aggressive surround presence once Pro-logic mode is engaged on a home theatre receiver. Whilst a dedicated low frequency track is not included, most surround systems will derive an adequate amount of bass information that can be directed to a subwoofer.

Again, I'd like to eventually hear Adventure Time with a full 5.1 soundtrack, but until that day eventuates, I can't imagine many die-hard fans skipping this Blu-ray release because of it. 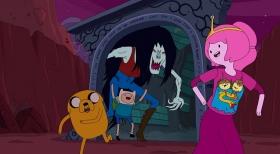 I was a little disappointed by the supplements offered on the first and second season Blu-rays, so I'm certainly pleased to see a more, shall I say, traditional set of bonus featurettes that actually give an inside glimpse on the production of the show--even if it is painfully fleeting. Let's take a look.

First up are Audio Commentaries for each and every one of the 26 episodes, which feature a range of participants, including creator Pendleton Ward along with an assortment of writers, animators, and producers. Whilst some fans might be a little disappointed that those behind the series are a little saner than you might think, there is some fun to be had here, even if you'll be hard pressed to get through every episode.

Next is an eight minute How an Idea Becomes Adventure Time featurette, which sits down the creative minds behind the show for a rapid fire discussion on the show and how episodes are nutted out. I still choose to believe in a more romanticized version of events.

Finally, we have the innocuously named Alternate Intro by Screen Novelties, which is actually a very cool one minute long version of the main titles re-created in Lego.

PRICING: You can find the Adventure Time: Season 3 Blu-ray for sale below. The prices listed are valid at the time of writing but can change at any time. Click the link to see the very latest pricing for the best deal.