With its roots in the recurring skit from the first Jackass movie in 2002, which featured Knoxville in old age makeup whilst terrifying the unwitting and thieving from stores, Bad Grandpa attempts to mix up the formula by weaving a narrative amongst the skits. Unfortunately, therein lies the fatal flaw in the proceedings. 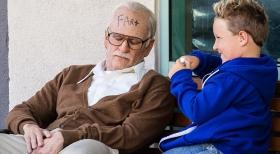 86-year-old Irving Zisman (Johnny Knoxville) is coming to terms with the recent death of his wife Ellie (Catherine Keener), when his wayward daughter Kimmie (Georgina Gates) arrives late at the the funeral with her young son Billy (Jackson Nicoll) in tow and explaining her imminent arrest for parole violation. Thus, Zisman finds himself tasked with transporting Billy to his dropkick father Chuck (Greg Harris), but along the way, Zisman and Billy start to bond, and through numerous escapades, Zisman finds it hard to release Billy to an uncertain future.

Whereas Jackass took the viewer along for the ride in whatever crazy antics had been cooked up, Bad Grandpa closes the behind the scenes curtain and presents the skits as part of the story, along with, of course, the invariably stunned responses of the public via hidden cameras. However, Director Spike Jonze has forgotten that laughter is infectious, and disassociated from the craft of creating the stunt itself, Bad Grandpa suffers significantly in comparison. Worse, the return to the central narrative after the stunts creates a lull that takes time to pick up again. Basically what I'm saying is that the stunts themselves are funny, but the story sucks and we just don't care about it. With Bad Grandpa, the story serves the stunts and not the reverse.

Further, the marketing team of Bad Grandpa has committed the mortal sin of showing the funniest parts of the film in the theatrical trailer, although in this case, it may actually be a good thing. Still, that's probably not the point--in its opening U.S. weekend, the film made double its $15 million production budget, rendering my suggestions probably moot. Besides, it's hard to argue that the audience doesn't receive the cheap laughs that were promised.

Bad Grandpa is presented in the original aspect ratio of 1.78:1, and it is encoded with AVC MPEG-4 compression.

Reviewing of the technical quality of Bad Grandpa is an inherently difficult task, since it comes from a range of lenses and sources all the way down to standard definition, consumer grade cameras. At its best, Bad Grandpa looks quite fine--even impressive--with nicely saturated colors and a good level of detail that shows off fine textures and defines Knoxville's craggy makeup. At its worst, the transfer exhibits all the deficiencies of standard definition footage, with pixilation, strangled color spectrum, aliasing, and a general lack of detail.

In totality, this is a mixed bag that reflects the 'hidden camera' nature of the film itself, supplanted by narrative footage that sticks out obviously in comparison. 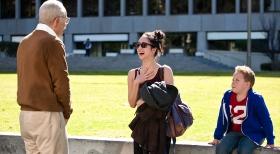 Similar to the above, the audio transfer accurately reflects the limitations of the filming methods and locations. To this end, it does a good enough job in that you can hear the dialogue and the reactions of those involved, but it does very little to impress. The only opportunity for any real impact in the soundtrack is via the odd song, but even these are mixed rather conservatively. As such, there is only basic use of the surrounds and even less subwoofer reaction. 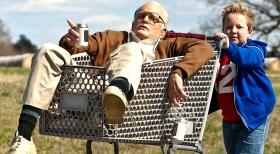 Paramount and MTV have assembled a small, but nonetheless welcome, collection of supplements that have clearly been tailored to the film's fan base. Let's take a look.

First up is a collection of eight Behind the Scenes Featurettes, which total around 30 minutes of footage and discuss the set-ups, execution, and wash up of a few of the hidden camera moments. There's some interesting stuff here, including the anticipatory glee of cast and crew, and it's worth noting that many of these featurettes are more satisfying and come with a better pay-off than what was included in the film proper.

Next is a collection of six Alternate Takes (labelled as 'Alternate Marks'), most of which relate to the film's narrative glue and add up to around 19 minutes of footage.

Finally, we have three Deleted Scenes, which total around 6 minutes, and despite their brief duration, were clearly excised for a reason. 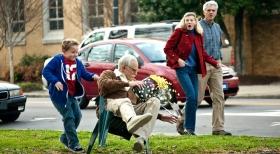 PRICING: You can find the Bad Grandpa (2013) Blu-ray for sale below. The prices listed are valid at the time of writing but can change at any time. Click the link to see the very latest pricing for the best deal.