Call me cynical, but the Pixar of old prided itself on its breadth of original franchises, churning out hit after hit of refreshingly original adventures. Titles such as A Bugs Life, Ratatouille and Wall-E zeroed in on audiences with stunning accuracy, and suddenly made traditional animation seem very old and stuffy indeed.

Unfortunately, something has changed within the company, because over the last few years they've gravitated towards rehashing old ground by returning to the well and thrashing out sequels to established films. Of course, there's nothing inherently wrong with that, and to be frank it makes solid business sense, but most critics would agree that Pixar performs best when it's striking new ground.

When the pre-pubescent green monster Mike (Billy Crystal) meets the lumbering blue tuft of Sully (John Goodman) as dorm-room co-habitants on the Monsters University campus, a friendly relationship turns ultra-competitive following their selection to rival frat houses. However, when Mike struggles to satisfy the demands of Dean Hardscrabble (Helen Mirren), a deal is brokered that may find him permanently evicted from the university unless his house can bag the top honors at the annual Scare Games, a task ill assisted by the house's ragtag assortment of losers. 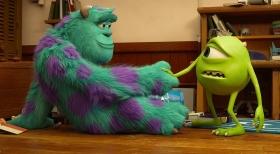 Of the entire stable of Pixar films, Monsters Inc. demanded a sequel quite possibly the least, with its predecessor existing as a perfect formed entity unto itself, with a wholly emotionally satisfying and touching finale.

In many ways, Monsters University mirrors my thoughts on Pixar's Cars sequel from 2011. Sure, it extrapolates the world and it's admittedly fun to return to, but as many sequels go, its attempt to justify its own existence falls quite far. For Pixar, whose films are somewhat revered by the world's critics, going back to the well runs the risk of cheapening the experience of the first - and that's the battle that Pixar takes on by pumping out sequel after sequel.

I'm not trying to portray that Monsters University doesn't have anything valid to say. To the contrary, it's certainly entertaining and moreover, a whole heap of fun. But I'd also like to see a bit more originality return to Pixar, and with the forthcoming sequel to 2003's Finding Nemo - the imaginatively titled Finding Dory, it seems that the message is getting lost. Perhaps that Bug's Life sequel is coming after all...

At this point in the Blu-ray product lifespan, I think most will know what to expect when it comes to Pixar releases and CG animation in general. That is, suffice to say, near visual perfection - or at least every bit as good as dictated under the relative limitations.

Pixar paints with the entire gamut of color and this translates so well to the small screen. The image is full of fine detail, and whilst these ever so slightly hint at aliasing, I think most would forgive the slight indiscretion.

The technical upgrades to Pixar's titles are seemingly only incremental, but compare the CG animation to that of the original Monsters Inc. some twelve years ago, and it's really quite astounding how far animation has come. The improvements to texture mapping and hair (and fur) simulation are striking. Every fine detail is captured here in 1080p, and I'd certainly be interested to see how these upscale to 4K. I'd wager quite well.

Overall, this is what one would term 'demo quality'. 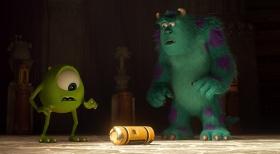 Monsters University is presented in Dolby TrueHD 7.1 at 24 bits.

I'm happy to report that the audio track here is almost as impressive as the video transfer. It's no surprise that a candidate for the 11 channel theatrical 'Dolby Atmos' experience downgrades very well to the home environment. Every channel is ceasingly active, from the front sound stage which has some clear separation, to the aggressive split surround effects afforded by 7.1 encoding, which come to life most convincingly during crowd sequences.

I didn't detect any audio "nasties," or any issues with dialogue intelligibility, or audio sync. 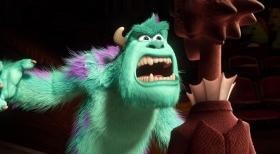 Sadly, whilst a two disc set which mirrors the U.S. release has indeed been released in Australia as a retailer exclusive with JB Hi-Fi, I have only been supplied with the one disc Blu-ray. For the sake of a few dollars more, I would bet that most fans would prefer to get the whole experience on the full collectors set, but c'est la vie. This one disc set features a few scant extras, but only a fraction of the full set. Let's take a look.

First up, the Audio Commentary by Director/Co-writer Dan Scanlon, Producer Kori Rae and Story Supervisor Kelsey Mann. The track is reasonably good, but not quite as informative as that afforded to stand out releases in the past.

The only other extra is the 8 minute Blue Umbrella Short Film, which is a very sweet natured and heartwarming little feature involving the meeting of two umbrellas on a rainy, and otherwise gloomy city street. The short accompanied Monsters University theatrically last year. Don't miss it. 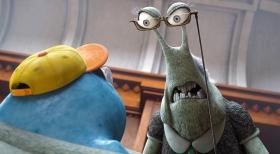 PRICING: You can find Monsters University on Blu-ray for sale below. The prices listed are valid at the time of writing, but can change at any time. Click the link to see the very latest pricing for the best deal.