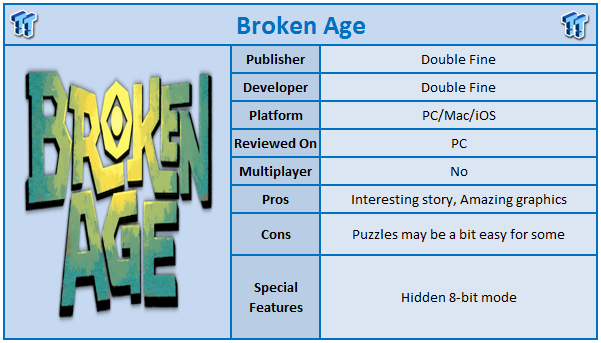 It seemed that 2013 was the year of the Kickstarter. Numerous famous companies hit Kickstarter to get the funds required to build their dream projects, but of course this had to start somewhere, and the first person to really hit Kickstarter hard was Tim Schafer. He promised to bring back the traditional adventure game genre that we had previously seen from LucasArts etc., along with the game Double Fine.

Gamers in their thousands responded kindly, giving Tim a lot more money than he originally asked for. It has been a while, but the first real Kickstarter success story (in terms of funding) has finally arrived in its first act, and whilst it doesn't necessarily bring back everything people loved about adventure games, it still is a very solid beginning to this interesting adventure game.

Broken Age is split into two main adventure areas. You have Shay, a young boy trapped on a spaceship who has an overprotective mother that also happens to be a CPU, and Vella, a young female living on what we presume to be Earth, in a village with some strange tribal traditions. On paper, the two couldn't be more different, but as you work your way through the adventure, you will begin to see why this structure exists. Shay is stuck on a spaceship dealing with a parental problem, where he is being wrapped up in cotton wool and hidden from the real-world, whilst Vella is dealing with a parental issue in which she is being offered up to a large monster to keep their town safe. Over the course of four or so hours, you will be enthralled. 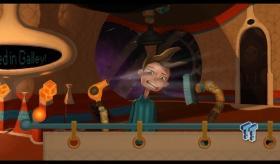 Where we begin to see the traditional gameplay that Schafer discussed during the Kickstarter campaign is when you begin to pick up and use items. The trademark humor that Schafer has come to be famous for is present in Broken Age, and we laughed out loud many times before the first act of this adventure was over. Picking up items throughout the game world is obviously the key to this game, and you really do need to try and pick everything up to get the most out of this game. Again, this is something that was characteristic of those famous '90s adventure games.

Where you also see typical gameplay from '90s adventure games is the inventory management system. You can move the mouse to the corner of the screen to open up a content menu and pull the necessary items out. You can drop them on each other to get some often hilarious quotes, but occasionally this action is required for a puzzle.

Where Broken Age starts to somewhat diverge from its intended gameplay style is the puzzles. These are puzzles that in general only require logic to solve. Now, that may sound like a rather silly statement to make, but those who have played '90s adventure games would clearly remember just how obscure some of the puzzles were. There is no doubt that Broken Age is a game that is designed to challenge and puzzle the player, whilst ensuring that everyone has the opportunity to finish it and finish it well. When we got stuck on a puzzle, it was usually because we didn't have a key item, rather than the puzzle just being out and out crazy, and that is a positive to the game. 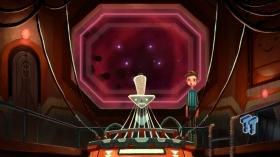 With this being only half of the promised game, it's hard to really comment on the length, but for the first act, it's quite decent. Even with knowing exactly where to go, it will take around three and a half to four hours. This is probably a good indication, because the puzzles are not brain bustlingly hard. If the team can keep this level of length up into the second act, then the entire game will come out at around eight hours, which is actually very impressive for an adventure game.

To give a comparison, it is possible to finish some of the nineties adventure games within two hours if you know exactly what you are doing, so this is a fairly lengthy prospect, even with only the first act released.

The presentation style of the game really assists with the puzzles as well. When talking to characters within the game, hints are clearly offered, but the dialogue options also offer hints as well. For example, if a question remains to be asked to someone again and again, you can be pretty sure that the key answer to a puzzle can be read from that dialogue choice. 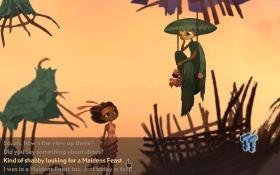 It is this subtle approach to solving puzzles that makes Broken Age such a delight to play. You know you are only a few minutes of thinking away from working out the solution.

One of the more interesting aspects of Broken Age is that you can switch between Shay and Vella's adventures during any time of the game. This is actually a stroke of genius, and instead of having to be stuck on a puzzle that you may just not get, you can quickly jump to the other character and play for a while whilst you solve the other puzzle in your head.

In general, we played one before the other, which is easily done as well, but this flexibility again shows what Broken Age is all about and that is good adventure game design.

On the visual side of things, this is where the game really does impress. Right from the outset it has gorgeous graphics that suit the story and world very well. The best way to describe it is as a water color based cel-shaded texture, but it just looks amazing. Some of the characters in the game (especially the 'wool kids') look stunning, and carry the humor of the game very well even just in their looks.

Schafer and his team have always been impressive with graphics, and Broken Age just continues that tradition. Voice acting is impressive as well, although we wouldn't have guessed Shay was voiced by Elijah Wood if we didn't already know, but even so, the voice performances suit their characters perfectly. 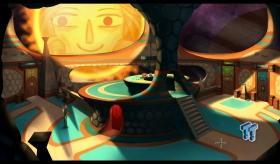 Broken Age does many things right, and proves that with the right team behind it, Kickstarter based games can be a good investment for gamers to back. Aside from the fact it's a Kickstarter the game, in its first act, it really does deliver what it promises, which is an old school style adventure game with the humor we have come to know from Schafer. When the credits began to roll, we instantly wanted to start Act II, and that can only mean this is a very good game indeed.