When the original Thor was released back in 2010, shortly after the release of Iron Man 2, the wheels of the wider Marvel universe were slowly but obviously grinding into gear, the blueprints of which would continue to be solidified with future releases such as Captain America and of course, The Avengers. Now that the so-called 'phase one' story arc has been completed, Marvel can afford to dispense with the pleasantries, and in turn explore the deeper mythos and give a deeper understanding of the rich worlds that these iconic characters inhabit. 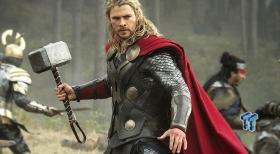 Following directly on from the events of The Avengers, Thor (Chris Hemsworth) and Loki (Tom Hiddleston) have returned to Asgard, the former of which has been imprisoned for his war crimes by the hand of his father, Odin (Anthony Hopkins). In the interim, a period of peace has befallen Yodenheim. The Bifrost, the portal between Yodenheim and Earth has been repaired, which lays hope for the reuniting of Thor and his earthly love Jane Foster (Natalie Portman).

But peace proves to be fleeting, when a foe known as the Dark Elf Malekith (Christopher Eccleston) returns with an army of warriors called the Kursed with a plot that will personally strike at the heart of Thor on multiple levels. 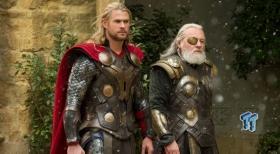 Despite a change in writers, directors and even composer, there is a distinct and tangible leap in confidence that permeates every frame of The Dark World, suggesting that after seven films and six years, Marvel has turned the process of production into a truly a well-oiled machine.

Whereas I found the first Thor to be a solid, yet unspectacular film in its own right, even with reliable casting and impressive visuals, The Dark World is an infinitely more balanced feature, which is happy to knowingly wink and nod at the audience and not take itself too seriously. This is in relative contrast to the first, whose more serious tones caused some of the more fantastical elements to come off as camp and reminiscent of 80's faff such as The Masters of the Universe, Krull and Conan The Barbarian. This is juxtaposed against providing a much deeper exploration of the Norse inspired roots of the graphic novel, which despite an exponential increase in action also has more time to relax into a more considered approach. 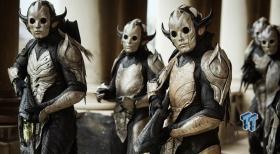 This time around, Chris Hemsworth is noticeably less wooden, a lot more likeable and even more physically imposing, whilst Natalie Portman, Christopher Eccleston and particularly Sir Anthony Hopkins are no doubt capable of much, much more, they do provide a sense of gravitas to the proceedings. However, special note must go to Tom Hiddleston, who steps up to the villainous plate for a third time with his devilishly devious portrayal as Loki, the God of Mischief.

Overall, I found Thor: The Dark World a strong improvement over the first and not only a solid next step for both the franchise and the wider Marvel cinematic canon, but also a fun ride in its own right. 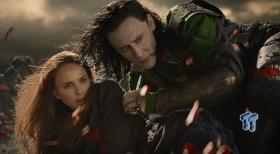 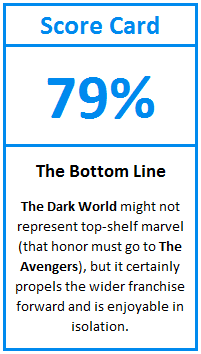