Coming short of two years after his death, Jobs is the first of the two planned bio-pics of the Apple co-founder to be released. Whilst it's a reasonable attempt at distilling a few decades of one of the most important figures of the 20th Century, sadly the film falls somewhat short. 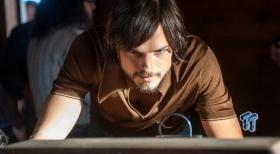 The film opens with the newly returned CEO Steve Jobs (Ashton Kutcher) 2001 reveal of the company saving iPod device before flashing back to a university aged Jobs, and progressively following his subsequent drop out and trip to India and acid-taking, which arguably solidified his emerging philosophies. His employment and early difficulties with staff at Atari are briefly glossed over, before the film takes root in the creation of Apple from the garage of his parents Mountain View home.

When Apple goes public, exploding with rapid speed, Jobs soon finds that his management style and interpersonal skills, alongside his unflinching confidence in his own abilities puts him on a collision course with the Apple board, including the Judas-like John Sculley (Matthew Modine) and Arthur Rock (J.K. Simons) which shatters the illusion of the company, which continues to nosedive precariously. 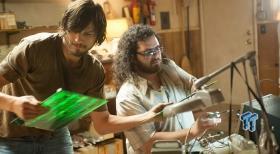 In the end, Jobs is an admirable, yet flawed endeavor which shines some light on the man and his life, yet is never entirely believable, seemingly forced and full of fan-service moments. Ashton Kutcher admittedly plays the role to the best of his abilities - he nails Jobs hunched over walking gait, and is somewhat successful with his vocal inflections, yet fails to alternate between the public Jobs and the private Jobs. Worse, his acting range is not entirely conducive to portraying the role of a complex, eccentric and flawed individual. 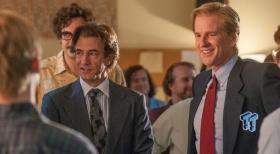 The supporting cast, including Matthew Modine as former Pepsi Cola CEO John Sculley and Josh Gad as Steve Wozniak do a serviceable job with the material, yet fault can once more be apportioned to the latter. Director Joshua Michael Stern does what he can with a low budget, and at times the film admittedly looks as expensive and glossy as Apple's own products, but the critical fault lines of the scripts hollowness, coupled with Kutcher's relative weaknesses ultimately prevent the film from rising to the occasion. 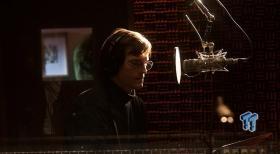 The 2011 autobiography Steve Jobs, published shortly after his death and written by the esteemed Walter Isaacson will undoubtedly remain the final word on Jobs; a warts and all look-in, formed from dozens of hours of interviews with Jobs himself, along with those that knew him best. Through this book, I felt like I have a solid grasp on Jobs. Through this movie, I felt I watched an approximation, a semi-accurate portrayal of someone that looks and sounds like Jobs, but never Jobs himself.

I hope the forthcoming Aaron Sorkin Steve Jobs production, utilizing the Walter Isaacson book will be more successful in this regard, or perhaps it's just too soon to portray such an iconic figure who remains very fresh in the publics' eye. 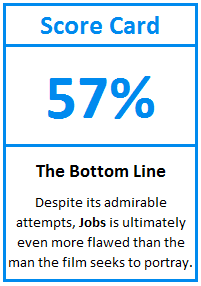