Under the directorial watch of Sam Raimi, a man many deemed unsuitable to bring the classic Marvel property to screens in 2002's Spider-Man, the franchise flourished and hit its peak with the 2004 sequel Spider-Man 2 before quickly diminishing with the third entry, three years later. The latest entry in the franchise; The Amazing Spider-Man is a full reboot of the franchise, jettisoning the established origin story from the first trilogy, in the same manner as Batman Begins before it. 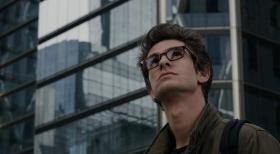 Peter Parker (Andrew Garfield) is a nerdy, albeit ordinary teenage boy, battling the mundane everyday issues, such as school and bullies. His fascination with science and the object of his affection, Gwen Stacy (Emma Stone) leads him to the headquarters of the conglomerate OsCorp, where he meets Dr. Curt Connors (Rhys Ifans), whose work with genetic manipulatory tests involving splicing of reptile DNA in order to re-grow severed limbs. Parker can't resist investigating OsCorp experiments, which leads him to being bitten by a genetically modified spider, which transforms him into the titular super being. But when circumstances call on Dr. Connors to prematurely begin human testing on the regenerative serum, he doesn't fare as well - transforming into a crazed lizard, with a plot to infect the inhabitants of New York City.

I enjoyed the new origin story, which aims to insert an air of mystery surrounding the disappearance of Parkers parents' which will inevitably be returned to in forthcoming sequels. But the film is hardly perfect. When Parker puts on the suit, it gives him an air of invincibility which fails to reflect his vulnerability, even when he is felled at the films finale. This results in action scenes which feel flat and lack real excitement or any sense of impending urgency, implying there's nothing major at stake. Some of the plotting was also somewhat reaching - I find it hard to believe that New York's finest would be so focused on arresting Spider-Man, when a 10 foot tall Lizard is wreaking havoc on the city.

Despite this, on balance I enjoyed The Amazing Spider-Man - flaws and all and I look forward to seeing where the franchise will be taken to next. 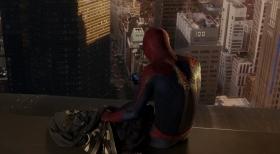 The Amazing Spider-Man 3D is presented in the original aspect ratio of 2.35:1, encoded with MVC MPEG-4 compression.

In 2D, we get a technically proficient transfer that's razor sharp, with a wealth of visual detail - no surprise, having been lensed entirely in the digital domain, on dual lens Red EPIC 5K cameras. As such, there's a complete absence of film artifacts and film to video artifacts, and no need for any intrusive digital noise reduction.

For a comic book movie, even one which wishes to portray itself as realistic, I'm surprised by some of the production design choices. First up, colors are extremely muted. The bright and bold signature red Spider-Man costume from the previous entries has now been replaced by what looks like a dull maroon. More so, I object to the extreme level of darkness inherent in the digital intermediate, which in turn creates immense problems when it comes to the third dimension.

Unfortunately, the 3D version of The Amazing Spider-Man compounds this curious production decision. Whilst I reiterate the point that this is not a fault per se of the transfer - it accurately reflects the cinema experience - but it doesn't make it right. And whilst cinema viewers will automatically lose some brightness to the polarization of passive 3D glasses, home viewers will lose even more light to active shutter 3D glasses. And then if viewers are watching on darker LCD screens, then this experience fast becomes unpleasant. Regardless of the display device utilized, you'll almost certainly need to engage the dreaded 'dynamic mode'.

That issue aside, the 3D version does precious little to enhance the story here. I'm not even sure that it made the experience that much more immersive. There's only fleeting examples of traditional 3D pop out, despite assumptions that Spider-Man himself would fly right into the screen. There are a few moments of solid 3D separation, but on balance, the benefits don't really outweigh the positives here.

Subsequently, The Amazing Spider-Man 3D is not a great demonstration of 3D technologies, nor for retailers trying to sell 3D equipment.

The Amazing Spider-Man is presented in DTS-HD Master Audio 5.1, at 24 bits.

As you would probably imagine, sound designers have moved completely to the right of conservatism here, giving the film an incredibly aggressive and dynamic mix which translates well to the home theatre.

The film is quite a roller coaster of sound design, with a significant surround presence and a deep and resounding LFE presence.

James Horner steps in to composing duties, usurping Danny Elfman. Unfortunately whilst Horner has done some amazing work in the past, his score for The Amazing Spider-Man can't hold a candle to the work of Elfman, or even his better works (of which many themes are self-plagiarized here). 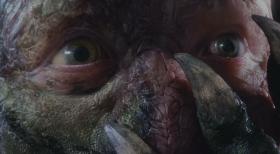 Blu-ray producer and documentarian Charles de Lauzirika was a constant on-set presence throughout filming, and his work makes up the impressive bulk of extras to be found on the second disc of the set.

First up is an Audio Commentary featuring Director Mark Webb and producers Avi Arad and Matt Tolmach. I didn't know much about Webb other than his music video career, but it seems he has a very good handle on the Spider-Man character. Arad, who also acted as producer on the previous entries, chimes in quite frequently offering justification for the quick reboot. It's an interesting track, with a little insight as to where the franchise will go in the future.

The main extra feature however, is the nearly two hour long Rites of Passage: The Amazing Spider-Man Reborn documentary, which over seven parts (with a handy 'play all' function) reveals a multitude of honest and frank behind the scenes footage and interviews , which completely pulls the hood back. Of particular interest was the choices made in the editing room which re-shaped the production late in the game, along with filming in the 3D domain.

Next up are some 17 minutes of Deleted Scenes to choose from. The film featured a somewhat problematic editing process where the film was significantly re-worked and much was dropped, including a lot of content which dealt with the mystery of Peter Parker's parents. We can view some of them in this section.

The Pre-Visualization and Image Progression Reels shed some light on the extensive use of visual effects in the production. I particularly enjoyed the look at the creation of the lizard, whose design I generally disliked, but makes for an interesting watch nonetheless. The Stunt Rehearsals footage shows just how much was performed on screen, compared to the significant use of CG stunts in the previous films - a pleasing trend to reality.

Finally, we have an Production Art Gallery which, whilst some fans may find holds some value, I simply had no desire in pressing 'next' 1000 times. 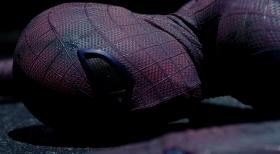