Starting life as a dramatized version of the failed U.S. military bid to locate the elusive head of the terrorist organization Al Qaeda; Osama Bin Laden, amongst the Tora Bora caves in Afghanistan, was aborted in favor of telling the story of the successful raid on the Pakistani compound.Zero Dark Thirty came into being immediately following Bin Laden's killing in May 2011. 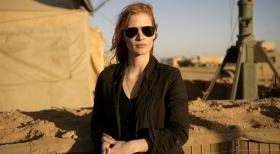 Zero Dark Thirty is primarily the journey of one woman, Maya (Jessica Chastain), a fresh out of college CIA analyst, who rises through the ranks to be taken seriously by her generally male superiors, whilst gathering intelligence from captives and loyalists who are happy to supply faulty or otherwise misleading information.

The methods of extracting this information initially repulse her, but as the story progresses, it becomes clear that the coercion is a necessary evil. Eventually, Maya gathers enough information to convince her military superiors including Joseph Bradley (Kyle Chandler) to take a gamble on her theories, leading to the climactic chopper assault. 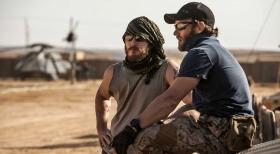 From this point, Zero Dark Thirty changes focus to take viewers on a firsthand account of seal team six, the elite group of agents tasked with capturing or killing the elusive head of Al Qaeda.

The last thirty minutes of the film (and I don't think this requires spoiler tags) is a white knuckle, edge of the seat affair, which from all accounts accurately recreates the assault on the Abbotabad compound, including the disastrous accident, which downed one of the top secret choppers. 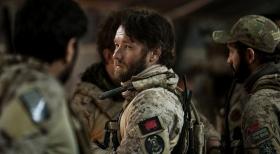 Director Katherine Bigelow is no shrinking violet in regards to war time storytelling, having secured an Oscar for her work on 2007's The Hurt Locker (and not least surviving a divorce from James Cameron), and she directs Zero Dark Thirty with adeptness over what seems like a breezy runtime. Notably, the story is told with complete apolitical judgment. Political figure heads such as former president George W. Bush, or Barrack Obama, are unshown and remain completely detached. 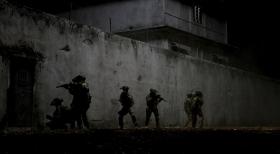 Some may find Zero Dark Thirty hard going; the scenes of simulated drowning via the controversial method of 'water boarding' prove particularly uncomfortable viewing, but this is war, and little attempt is made to dilute this fact. Over the course of its nearly three hour run time, Zero Dark Thirty proves not only to be a prime Oscar contender, but a compelling, smart and emotional account of an extraordinary moment in time. 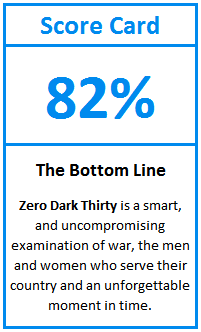