Time travel features can be a bit of a hit or miss. On one hand you have classics such as Back To The Future, Terminator 2 and 12 Monkeys and on the other you have fluff like Time Cop, Timeline and the utterly disastrous A Sound of Thunder.

Looper sits somewhere in between, a proficiently made film which rides high on ideas, whilst refusing to get tripped up its own logistics; only flirting with its future locations, instead homing in on a few small set pieces which focus on the human drama.

In the year 2074, an era where time travel exists and human bodies filled with tracking implants has resulted in difficulties in disposing of them. To rectify this, contract killers called loopers are established 30 years in the past, tasked with disposing of bodies of those sent back in time, in order to be taken out on the spot. But when a Mafia boss prematurely ends the contracts of those in the future by sending the loopers future selves to be murdered, Joe Simmons (Bruce Willis and Joseph Gordon-Levitt) must solve the mystery of why they are being exterminated, with events in the future causing dynamic changes to the multiple timelines.

Looper certainly isn't perfect and despite the best of intentions, it isn't the next Matrix, but the sheer originality of the film simply can't be ignored, nor the unflinching vision of writer/director Rian Johnson and the achievement of telling such a visual story with a budget of just $30 million.

Looper is presented in the film's original aspect ratio of 2.35:1, encoded with AVC MPEG-4 compression.

Filmed on Kodak 35mm stock and finished in the digital domain at 2K resolution, it's quite possible that Looper will never look better than it does here. The image is sharp and clear, as one would expect, with a significant amount of detail evident in every frame, with fine textures really helping the image pop.

Black levels are quite solid, although I did notice the contrast waver at times. There are certainly no instances of edge enhancement or film artifacts marring the frame. 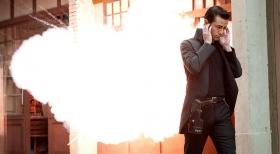 Not content to be just a proficient soundtrack, Looper aims to be a great one, filled with all the bombast and immersion that the visuals do. There are no issues I could detect in regards audio sync or intelligibility, and the surrounds are kept active at all times. Topping it off is some quite extreme LFE. One complaint would be that the soundtrack is just a little too dynamic, forcing a bit of volume surfing so as to not upset the neighbors (or the girlfriend). 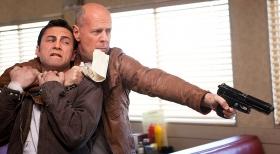 First up is the feature length Audio Commentary featuring Writer/Director Rian Johnson, along with lead actors Joseph Gordon-Levitt and Emily Blunt. Johnson is a smart and insightful guy and the commentators bounce off each other well, with clear rapport. Admittedly, only the most dedicated of the film's fans will be able to sit through the entire run.

Next we have four brief featurettes; The Two Joes, which over five minutes explains the process of turning Joseph Gordon-Levitt into Bruce Willis, with the aid of some handy prosthetics, while The Future from the Beginning and The Science of Time Travel discuss some of the plot elements. However, I found the final featurette; Scoring Looper to be by far the most interesting, with Nathan Johnson revealing the techniques and digital manipulation that went into producing the films memorable score soundtrack.

Next up are approximately some 38 minutes of Deleted Scenes presented in 1080p (along with optional commentary) which reveal that a significant batch of scenes featuring young Joe's girlfriend Suzie hit the cutting room floor. Finally, we have an oddly animated Theatrical Trailer, which differs to the standard, live action trailer I saw in cinemas. 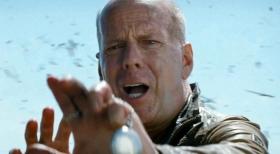