In the summer of 1990, hot on the heels of the success of Tim Burton's Batman, Disney (through its Touchstone brand) launched what was hoped would be Disney's own superhero franchise. Unfortunately, its success was only middling and plans for additional films were shelved. However, in the shadow of the evolution of comic book adaptations some two decades on, Dick Tracy has lost none of its ability to entertain, now seen as even more campy and tongue in cheek than it ever was.

There is a real charm to the film that contemporary overtly serious fare such as The Dark Knight can't quite match. Rather than aging as badly as its star Madonna, it's quite possible that two decades on Dick Tracy can finally find its audience, and with the quality of this Blu-ray release - there's no reason it can't. 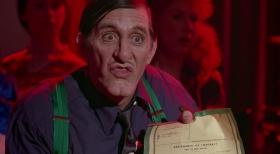 Set in a fictionalized, undated Chicago, Dick Tracy, is a hard-but-fair detective, whose day-to-day activities include battling grotesque Capone-like thugs, including Alphonse Caprice (Al Pacino) and the ruthless Flattop (William Forysth) for dominance over the towns various crime syndicates. When Caprice wipes out his rival Lips Manlis (Paul Sorvino), taking ownership of his moll, Breathless Mahoney (Madonna), and the nightclub she performs at, coming one stop closer to complete dominance of the city, but a straight cop like Dick Tracy won't take this lying down.

Whilst Dick Tracy is a mostly family-friendly action film, very occasionally the envelope is pushed with some double entendre dialogue, or risque costumes. What is clear is that the film has stood the test of time, with innovative production design and photography, some great character performances, including Dustin Hoffman as Lips, and great visuals. In many ways the film reminds me of The Rocketeer; and just like that film (also recently released on Blu-ray), it's high time that Dick Tracy was re-evaluated. 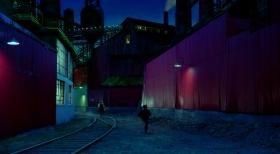 Dick Tracy is presented in the original aspect ratio of 1.781, encoded with AVC MPEG-4 compression.

Recipient of an all-new transfer of unknown resolution, Dick Tracy has never looked better. The overly red-hued image of the DVD release is now far more balanced, rendering the films signature comic book primary colors even bolder than before.

Made well before the digital age, Dick Tracy utilized many photochemical tricks in its repertoire, including significant use of models and matte paintings. Rather than accentuate these, the new transfer helps the image look even more filmic, and thus, strangely realistic.

Disney have retained a consistent and fine level of film grain in the transfer, whilst removing the unsightly video noise and mosquito noise that marred previous masters.

I'm really pleased that Disney went above and beyond for the film, rather than utilize the aged HD master that's played on network TV for some years. The film sure does deserve, and benefit from the treatment.

Notable for its timeline in history as the first film to be mastered in the digital domain with six track sound, Dick Tracy will most definitely slam your home theatre with the same bombast as the films visuals. No doubt, there has been some audio remixing and sweetening since then - the film has some very aggressive use of split surround activity and deep bass feedback.

I didn't detect any audio sync or intelligibility issues, nor any distortion or other undesirable anomalies. The numerous musical sequences scattered throughout the length sound internally appropriate and overall the mix sounds quite alive.

To put it simply, I highly doubt Dick Tracy will ever sound better than this. 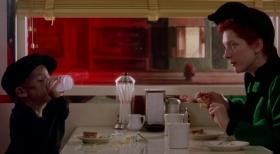 Sadly, Disney elected to release Dick Tracy as a bare-bones Blu-ray release, without even a lowly Theatrical Trailer to contribute. It's a real shame too, because there would be undoubtedly a myriad of interesting stories from the film's production, not least the torrid love affair between Beatty and Madonna that unfolded behind the scenes. 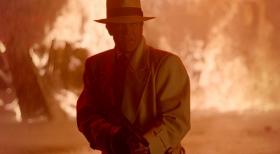