Regular readers of my TweakTown reviews will be quite aware of my love for animation (especially Disney), but I definitely have a soft spot for Japan's Studio Ghibli animation company, often referred to as "The Disney of the East". 25 years on it's impossible to ignore their first international breakthrough hit My Neighbor Totoro, nor the impact it had on the company - a Totoro adorns the studios logo. My 2010 trip to Japan and the Studio Ghibli museum just confirms how far the film has penetrated the popular culture and continues to define it after all this time. 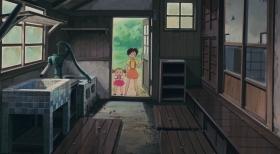 When young Mei, Satsuki and their father moves to a derelict home on the countryside in order to be closer to their hospitalized mother, they quickly discover that gentle spirits inhabit the area, confirmed by the presence of a small creature that bobs up above the rolling hills. When Mei follows the creature through to the inside of a camphor tree, she discovers a huge fluffy creature she names 'Totoro', beginning a friendship which unveils the true nature of their new home - including the magical denizens that inhabit it.

My Neighbor Totoro is a relatively simple story, beautifully told. Cynics need not apply, but those willing to open their hearts to a moving and genuinely fun animated adventure should definitely give this one a look. 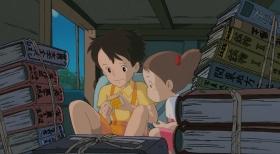 My Neighbor Totoro is presented in the film's original aspect ratio of 1.85:1, encoded with AVC MPEG-4 compression.

Similar to previous Studio Ghibli catalogue releases, My Neighbor Totoro has received a full high definition restoration which shows off the film like never before, with a sharp and detailed transfer which even reveals some of the shortcuts inherent in the animation process. Pleasingly, there has been little (if any) fake telecine wobble added to the new digital master, an issue which has plagued other Ghibli catalogue releases.

Color balance is very good, but compared to western animated features will appear slightly muted. This is not a fault of the transfer, but a reflection of the original production.

Overall, this is a really nice remaster which will please fans and cause many DVD copies to suddenly appear on eBay.

My Neighbor Totoro is presented in both English and Japanese PCM stereo audio tracks at 24 bits.

It's a bit of a head scratcher why the film hasn't been extended a more involving 5.1 surround mix, even from Disney who was responsible for the production of the English dub track for the American market. Confined to just two channels, naturally the audio experience won't be as involving as many film buffs are accustomed to, but I'm happy to report that the track does respond quite well to Dolby Pro Logic amplification if you are so equipped.

For review purposes I listened to the entirety of the film in its English dub and sampled the original Japanese audio. Both tracks are quite reasonable, within their aforementioned limitations. Audio fidelity is quite good and there are no problems with dialogue intelligibility.

The score by Ghibli regular Joe Hisaishi is truly wonderful and a great accompaniment. Again, it's a shame it isn't given room to breathe over surround channels, but for now at least, it is what it is. 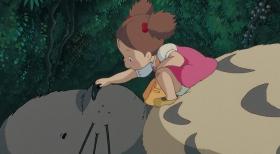 In a significant improvement over the previous DVD release, Madman has included not only all of the previous supplements, but also a few new extra features. Let's take a look.

First up is Picture in Picture Storyboards which presents the film in 1080p with a window in the bottom right hand corner of the screen showcasing the entire run of original production storyboards. Animation buffs might get a kick out of this, but others might be a tad bored after a while.

Next up are a bunch of production featurettes including Creating My Neighbor Totoro and Creating the Characters which over the span of seven minutes combined give a brief look at the genesis of the project. The Locations of Totoro is by far the lengthiest of the featurettes at nearly 30 minutes in length, which looks at the real world locations from Director Miyazaki's youth which inspired the locations in the film. The Totoro Experience discusses the interest in merchandising which simply wasn't available when the film was originally released, and Producers Perspective: Creating Studio Ghibli which reveals how the studio got its curious name. The five minute Beyond the Microphone featurette looks at the casting and recording of the English audio dub, and the Textless Opening and Closing shows clean templates before the sequence text is dropped in.

Finally, we have two Japanese trailers and additional trailers for Ponyo, Laputa and Arrietty. 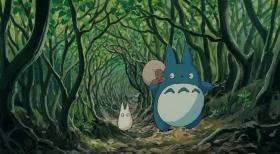