Disney have had a hard time these last few years, with some deep soul searching regarding what the company stands for. Under the leadership of Michael Eisner, the company ceased producing traditional animation features in 2004. Since the corporate upheaval which saw Eisner ousted in 2005, Disney vowed a return to traditional animation, along with the acquisition of Pixar animation studio, but since then has only released two traditionally animated features, along with three computer generated features.

With Wreck-It Ralph Disney have produced their most Pixar-like animation. In fact, it's only since I sat down to write this review did I even realize that this wasn't a Pixar film! 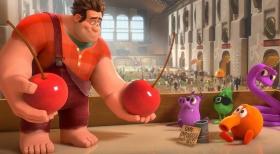 With shades of Tron, Wreck-It Ralph is set in the world of arcade games (remember those?). Tired of playing the thankless task of the bad guy in the Rampage inspired game 'Fix It Felix Jr', Ralph decides to go 'turbo' - that is, jump from the confined world of 'Fix It Felix' to the first person shooter 'Hero's Duty' where he obtains a medal - and the attention he so desires.

Unfortunately for Ralph, in the process of porting from 'Hero's Duty' to 'Sugar Rush', a candy infused racing title, unleashes a Cy-Bug which has the power to obliterate any virtual reality world it infests. In doing so, Ralph continues to live up to his name, but the consequences of his latest actions may mean the obliteration of every game in the arcade, and the denizens that inhabit them. 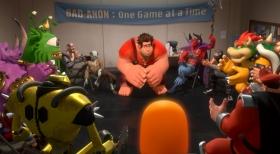 Filled with an array of video game characters including Bowser from Nintendo's Super Mario franchise, numerous characters from Street Fighter, Pac Man and Sonic The Hedgehog, Wreck-It Ralph already has an in-built fan base of video game lovers, and I think for the most part they'll be pleased with the film. It's clear that the filmmakers are big fans too.

In many ways Wreck-It Ralph is one giant homage to the games of old, and the juxtaposition between them and modern franchises such as the fake Call of Duty rip-off Hero's Duty. At one point Ralph asks, "when did video games become so violent and scary?", a question many who grew up with the blue skies and upbeat tunes of the Sega Mega Drive may also ask. 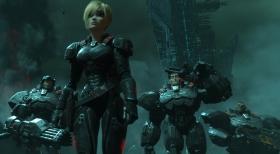 At its core, Wreck-It Ralph is indeed a children's film, and one perhaps as 'adult' as Pixar's offerings. I found the character Venellope von Schweetz a saccharine pain in the ass, although I generally find voice artist Sarah Silverman to be the same in live action form. John C. Reilly voices Ralph with a well-meaning, naive tone, but sometimes when prominent actor's voice animated features it just takes me out of the movie completely, and I think the film suffers for it.

I frequently wish Disney would return to the days of The Little Mermaid and Aladdin where voice artists were chosen on their individual merits - not just to create an eye-catching bullet point on the movie poster. 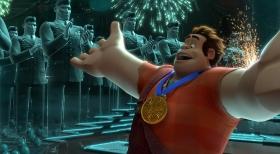 Still, I really enjoyed Wreck-It Ralph, and I get the feeling that those packed in to the somewhat full advance screening did too. And with the early financial numbers coming in, I fully suspect Disney have a burgeoning new franchise on their hands. 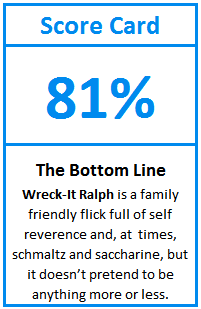