Oh what a painful couple of days this has been. Normally when we run into problems with a motherboard it tends to be issues with overclocking or maybe just problems with the motherboard initially booting. The last few days our issues have revolved around something else, though. Before we cover that let's look at the MSI Z77A-GD80.

Since the only difference between the MSI Z77A-GD65 and the Z77A-GD80 is the introduction of Thunderbolt, there's no need to go into the detail that we would normally on a motherboard. To get an overview on the complete board and the feature set outside of Thunderbolt, I highly recommend you check out our full MSI Z77A-GD65 review that was published in April.

Today our focus is going to be on the Thunderbolt side of things and if you should be looking at the GD80 over the GD65. Considering the $38 price difference between the boards, it's good knowing if that's worth spending to get Thunderbolt and that's exactly what we intend to find out today.

We know during Computex 2012, Intel had a large focus on Thunderbolt and we saw companies start to show off solutions that implemented it. This is our first time with the technology and using the Seagate GoFlex Thunderbolt adapter we intend to find out how performance looks.

Before we do that, though, we want to take a quick look at the box before we move into taking a closer look at some areas of the motherboard. Again, though, because of the similarities between the GD65 we've already looked at and the GD80 we're looking at today we don't want to repeat ourselves too much.

Starting off with the package you can see the front of the box really highlights two things, the first being the Military Class III components and the other being the Thunderbolt technology. 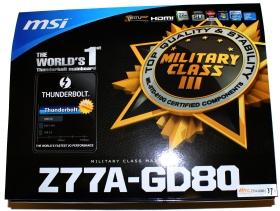 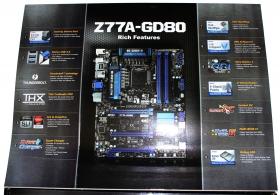 If we open the box up we can see the top part covers some of the main features on the board like Native USB 3.0, THX TruStudio Pro Audio, Easy Button 3, Instance OC, V-Check Points and again Thunderbolt. Moving to the bottom of the box, though, we can see the focus is all on the Thunderbolt side of things. 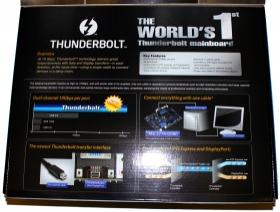 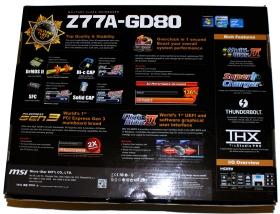 We see MSI really expand on the main features of Thunderbolt with the big stand out being the speed. Along with that we've also got the ability to transfer video through the cable. The main thing we're going to be looking at today, though, is the performance. You can see the back of the box covers some of the more MSI specific features. With that said let's take a closer look at the board itself. 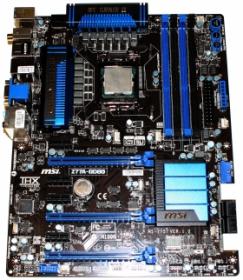 Towards the top end we've got four DIMM slots, the main 24-pin ATX power connector, V-Check points along with the power, reset and OC Genie buttons. Finally we finish off with the CPU side of things and you can see the heatsink setup and the main 8-pin CPU connector in the top left corner.

Moving away from the board and into the I/O department we can see a fairly standard line up of connectors including PS2, USB 2.0, USB 3.0, HDMI, audio connectivity, VGA and a clear CMOS button.

Moving in closer, though, the main connector we want to look at is the Thunderbolt one that sits just below the VGA header. You can see there's not a whole lot to the connector as it's fairly small, but we know that it's capable of offering some serious bandwidth.

With a Promise Pegasus R6 on hand that was filled with six 256GB Patriot Wildfire SATA III drives, we were looking forward to seeing just what kind of performance we could get out of Thunderbolt. After two days of trying to setup the Pegasus R6, we just had to call it quits.

The biggest issue for Thunderbolt at the moment and the devices that surround it is their main focus has been on Mac OSX. This is where we ran into problems with the Pegasus R6. For starters we don't have a driver on the Promise website at the moment for it when it comes to Windows and when we got the beta driver, while we got the device installed, it wasn't detected in any part of Windows.

The main reason we wanted to use the Pegasus R6 was because it was going to give us the best chance to show off the full bandwidth that Thunderbolt could offer. That just wasn't going to happen, though. Initially we thought the issue was the board, but more and more research showed us that the Pegasus R6 was having teething issues in Windows including its ability to be detected. 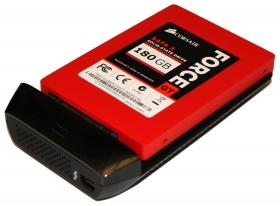 So what we opted for was to use the Seagate GoFlex Thunderbolt adapter along with a USB 3.0 adapter with a Corsair Force GT 180GB SSD drive. What we wanted to see was what kind of difference we get between these two setups and the same SSD connected to the MSI motherboard via SATA III.

Using HD Tune Pro we took the time to examine the write and read speeds of our Corsair Force GT 180GB via the Seagate GoFlex, USB 3.0 adapter and SATA III connector via the Intel Z77 chipset on our MSI Z77A-GD80. 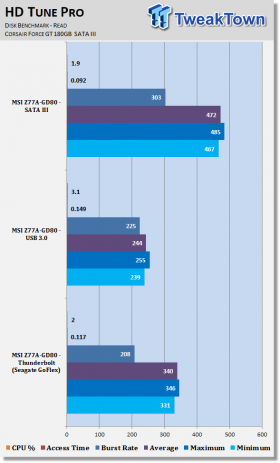 Looking above you can see that read performance over USB 3.0 is very strong. We can see in minimum, average and maximum speeds we're seeing the Thunderbolt based setup is about 100MB/s higher. We can also see that access time is slightly reduced while CPU % is also down by about 33%. Compared to SATA III we can see that we're still a fair bit behind, but you can see a clear boost over USB 3.0. 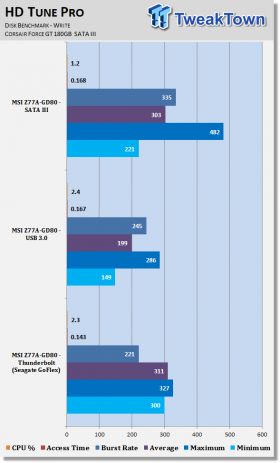 Ideally we would've liked to have tested Thunderbolt technology via the Pegasus R6 to see just how much bandwidth we could get out of it, but that just wasn't going to happen with ease. At the same time we're able to get a good idea of what happens when we simply compare the same SSD on Thunderbolt and USB 3.0.

Thunderbolt is looking like a good technology, but it's not without its flaws. The first is the cost, and it comes in many forms. One being the extra $38 associated with the Z77A-GD80 over the Z77A-GD65. The second being Thunderbolt devices and the third being the Thunderbolt cable, something that a lot of companies don't include.

Along with that there are also the compatibility issues, for a long time we saw Thunderbolt and Mac based computers mainly sit together, for that reason it seems that not everyone is ready for PC based Thunderbolt devices and that's obvious with the Pegasus R6. On the other hand we look at something like the Seagate GoFlex Thunderbolt adapter. We didn't run into any problems at all with this adapter, no driver and the second we plugged it in, the GoFlex and our SSD was detected.

If you're someone who chooses to have their PC for a significant amount of time and you think you'll find yourself jumping on the Thunderbolt bandwagon at some point, then I'd say it's worth spending the extra $38 over the GD-65 to buy this board. If you can't see yourself making use of the technology, though, you'd be better of sticking with the Z77A-GD65.

It's good to see that MSI has adapted Thunderbolt quickly and it's good to see that our issues with getting our Thunderbolt device initially up and running wasn't because of the board, but instead the Pegasus R6, which clearly doesn't seem Windows ready at this stage. Thunderbolt is something we'll be examining more and more over time so keep an eye out as we try to flood the bandwidth of the technology in the coming months. 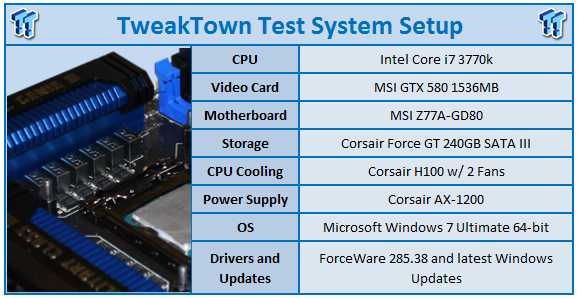