Like George Lucas, Director James Cameron has for a number of years experimented with converting his biggest hits to stereoscopic 3D, so it is interesting that the Phantom Menace and Titanic re-releases come just two months between each other. However, no single Hollywood figure embodies the 3D movement any more than James Cameron, who put the technology on the map so convincingly with Avatar in 2009. Any 3D conversion is going to have extremely high expectations to live up to - not just from the director, but from audiences too.

Twelve years on from its original theatrical release, I'm not sure there are many people who have not seen the film, or at least are unaware of the plot of Titanic, but I'll give it a quick rundown.

When naval scavenger Brock Lovett (Bill Paxton) leads an expedition to recover the fabled heart of the ocean diamond from the wreck of the RMS Titanic, but fails to obtain the multi-million dollar jewel, he instead gains a water-logged portrait of a beautiful woman, which thrusts him into a 84 year old, previously undisclosed love story which transgresses social class and an arranged marriage.

The film flashes back to April 1912, where RMS Titanic is leaving berth at Southampton on its maiden voyage, bound for the United States. On board are 2224 men, women and children from all walks of life - from wealthy socialites keen to be seen to have travelled on the most luxurious vessel yet constructed, to immigrants seeking a new life in the United States. Jack Dawson (Leonardo Di Caprio) is a poor artist living a nomadic existence who wins his ticket for Titanic in a lucky hand of poker. Rose DeWitt Bukater (Kate Winslet) is a wealthy socialite bound to be wed to the wealthy magnate Cal Hockley (Billy Zane). Jack and Rose fall in love but, they are quickly thrust into a battle of survival when the ship strikes an iceberg in the freezing North Atlantic, taking on water rapidly, with significantly less life boats on board than necessary to save all on board.

It's hard to imagine, but the pre-release buzz on Titanic was rather poor. The budget-busting debacle of Waterworld was still fresh in the minds of studio executives and seeing the budget spiral out of control, Twentieth Century Fox partnered with Paramount Pictures to distribute the film to share in any potential profit, but more likely to share in the scenario of a loss. Of course, Fox kicked themselves when the film went on to bank $1.8 billion dollars worldwide, only surpassed by the equally surprising success of Avatar 12 years later. The film's success was sealed by the equal setting record of 11 Academy Awards, including Best Picture at the 1998 awards ceremony.

While many cringe at the ridiculously over-exposed Celine Dion power ballad "My heart will go on" and some relatively weak dialogue, the truth is that the film holds up extremely well 15 years later. James Cameron is notorious for his over the top attention to detail, but this has allowed the film to age with grace. Even the once cutting edge visual effects which only very occasionally show their digital seams.

The biggest draw card of the theatrical re-release is of course the addition of stereoscopic 3D. James Cameron is a fierce advocate for shooting native 3D, but short of finding a time machine, this option was no longer available. Twentieth Century Fox stumped up the $18 million bill to convert the film (some three times the normal conversion costs) and the results are very convincing and will prove to be a very wise investment.

Obviously the film was not designed with 3D in mind. Very occasionally there will be an out of focus item in the frame that for the sake of consistency has been bought to the negative parallax (i.e. in front) where that would not have been framed in the shot in a native 3D production. Things like that ever so slightly take you out of the production, but they are rare and they are fleeting. Towards the end of the film, there are some great examples of 3D application - especially the plane of sea which juts out from the frame with impressive immersion.

My mind boggles when I think about the complex equations and mind-numbing maths necessary to convert over 3 hours of a rather complex film, especially when the artists have to answer to James Cameron. Overall, the 3D is a great success and genuinely adds to the film - which can't be said for all 3D productions. I thoroughly enjoyed going back to Titanic.

And yes, the end sequence still brings a tear to my eye, dammit! 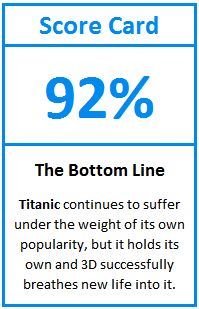