Despite the fact that George Lucas had been dabbling with transferring his sci-fi series to the 3D medium for some years, when plans were officially revealed that the first film in the Star Wars series - The Phantom Menace would be the first to receive the treatment, the cinematic universe didn't seem to elicit much more than a resounding 'meh'. 3D was already on the nose, even more for overt conversions and the backlash against the overhyped and under delivering Star Wars prequel series remains fresh in the minds of film lovers.

But the bean counters at Lucasfilm and Twentieth Century Fox pressed on, crafting a smart media campaign that does its best to remind movie goers how much they love the franchise, cleverly side-stepping any mention of a certain annoying CG creature. The numbers have yet to come in, but I'm sure it will be a success and certainly justify the conversion of the other five films in the series. Bring 'em on.

It's hard to imagine, but the gap between the original theatrical release of the film and today is just a few years shy of the gap between Return of the Jedi and Phantom Menace. I was 13 at the time and smack bang in the target audience. I knew it had flaws and the surprise success of The Matrix had prematurely aged it even before release, but my God, it was great to see Star Wars - any Star Wars back on the big screen. My feelings remain the same. Divorced from the hype The Phantom Menace is left to stand on its own two feet, finally speaking for itself. I'll be frank. It's not a great film. It's a good film. It's not a good Star Wars film. What's more is the 3D effect does not help Jar Jar become any less annoying. It doesn't help Jake Lloyd become a better actor. It doesn't give the film any more feeling. And it doesn't give one of the best villains in cinematic history any additional screen time.

While The Phantom Menace is meant to tell the origin story of the whole series, it feels as if we have stumbled upon a plot that has already begun to unravel. Jedi Knights Qui-Gon Jinn (Liam Neeson) and Obi-Wan Kenobi (Ewan McGregor) have been sent to negotiate with the galactic Trade Federation regarding their blockade of the planet Naboo. No sooner do they arrive when they are attacked and are forced to stow away to the planet, ruled by the young Queen Amidala (Natalie Portman) while attempting to discover why they were ambushed and by whom. With grave ramifications for the galaxy, they soon have a chance encounter with child prodigy Anakin Skywalker (Jake Lloyd) whom was seemingly willed into existence by the Force and who will set in motion events which will forever change the galaxy.

Taxation and the mundane existence of the Trade Federation make for very unsexy film plotting and they seem rather out of place in the context of the series. George Lucas wanted to make parallels to the rise of Adolf Hitler as chancellor of Germany but the demographic is all wrong and it's the first real example that the prequel series was going to have problems. Structurally, it was screwed from the start. There are many more problems inherent with The Phantom Menace that have been debated mercilessly by others more talented than I.

To sum it up briefly, the script and situations are convoluted and often seldom make sense, the performances were negatively affected by the insistence that everything would be performed against blue screen, Jar Jar Binks continues to prove why he is one of the most loathed characters in the Star Wars universe and the role of Anakin Skywalker was horribly miscast. Upon a recent viewing of Real Steel I couldn't help wonder why Lucas was not able to find a child actor of the caliber of Dakota Goyo. He of course wasn't even born when this film was first released.

Naturally, 13 years on, expectations have been recalibrated significantly and there is still a lot to still like about The Phantom Menace. The score by John Williams is extremely good and the Duel of the Fates track played during the climactic lightsaber battle is one of the best contributed to the entire series. The casting of Ewan McGregor as a young Obi-Wan Kenobi was perfect. The special effects have held up reasonably (albeit not nearly as well as the original series). Darth Maul is a seriously great villain and it's the first time in the series that we've seen some real ass-kicking lightsaber battle action. The fight choreography by Nick Gillard was extremely well done and much was done to emphasise this in the re-release publicity campaign.

The 3D conversion is for the most part quite successful. Obviously, none of the film was made with 3D in mind and the firm tasked with the conversion, Prime Focus, have walked a very fine line and erred on the side of subtlety. There are times when I wished they had pushed foreground effects just a little more. The floating seeker droids dispatched by Darth Maul and some of the lightsaber scenes gave the potential for some good stereoscopic effects that I don't think were fully capitalised on. However, I was pleasantly surprised that there were very few errors introduced in the process. Hardcore fans that have seen the films more frequently than I who are focusing more on the 3D effects rather than watching the films may be a little more critical.

Ultimately, I think Star Wars in 3D works. The Phantom Menace is one of my least favourite Star Wars films but I'll no doubt be seeing it again before it finishes its 3D theatrical run. Inherently, Star Wars films belong on the big screen. I was born some two years after Return of the Jedi had left cinemas, but I have great memories of seeing the Star Wars Trilogy: Special Edition with my uncle in 1997. With Lucas releasing one 3D Star Wars film every year for the next 5 years, it will be 2017 before the finale, Return of the Jedi makes its 3D return. I wonder who I'll be taking to enjoy these films with over this time. Star Wars transcends the boundaries of its medium. It's a cultural experience. And that's what all this is really about. Star Wars is back. Go and see it. 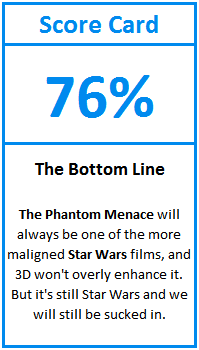