Since the 1999 release of X-Men which completely re-invigorated the comic book movie adaptation business after it was murdered so completely by 1997's Batman & Robin, the movie industry has been awash with every superhero from both the major American comic studios Marvel and DC and other independent studios, generating billions of dollars in ticket sales and rejuvenating the comic book industry.

Whilst many of the newer film adaptations have been great films in their own right, there have been some notable stinkers. Fantastic Four was anything but fantastic, and Catwoman was notoriously awful. I think it's appropriate that The Green Lantern shamefully shuffles into this corner to join them.

Hal Jordan (Ryan Reynolds) is a talented test fighter pilot whose brashness and cocky attitude have landed him in hot water with his employers at Ferris Aircraft after he jeopardises a lucrative government contract. At a low ebb in his life, Jordan is chosen by a Green Lantern ring to join the corps and to replace the dying Green Lantern named Abin Sur (Temuera Morrison).

The Green Lantern corps led by Sinestro (Mark Strong) and Kilowog (voice of Michael Clarke Duncan) are perplexed by a lowly human joining their ranks. Feeling ostracized, Jordan flees from his calling, returning to Earth. But when the evil Parallax (voice of Clancy Brown) threatens to destroy the Earth, Jordan needs to take up the mantle as Earths protector, to see off its certain destruction.

Films like The Green Lantern occur when the Director, in this case the normally safe pair of hands of New Zealander Martin Campbell (who was responsible for two of the best James Bond films in recent decades GoldenEye and Casino Royale) fails to understand the source material and what makes the property tick. For example, his hokey treatment of the intergalactic elements of the titular character fails to hide his obvious disdain and the protracted Hal Jordan scenes set on Earth are not what make for a great Green Lantern film. It's like going to McDonalds for a salad - you just don't do it.

It's also incredibly banal and unlike the subtle charm of the more outlandish elements of say Captain America, which were handled in that adaptation with tongue in cheek references and a wink to those in the know, The Green Lantern comes off as downright embarrassing.

The cast, notably Ryan Reynolds and Peter Sarsgaard give the material their all. Reynolds does his best 'dumb guy with a heart of gold' act and it almost works. His buff physicality is also very suitable for the role and he looks the part in the CG costume. I just wish the script really allowed him to stretch more.

The special effects were reasonably good, they were definitely going for the comic book look rather than realism and the artists have done a good job of visualising the world of the Green Lantern and updating the look. For a comic that dates back to the 1940's, there is obviously a fair amount of revisionism to bring it in line for today's audience, but I think it stays true to the ethos if nothing else.

Unfortunately, overall this is a missed opportunity and proof that no matter how much money you throw at a project (allegedly a budget of in excess of $200 million) and how good your visual effects are, it can all go pear shaped when there are too many cooks in the story department.

To make matters worse, the theatrical showing of the 2D version which I caught, which owing to the Australian release delay, had been evidently battered overseas due to its poor condition. Even the digital sound lost synchronisation early on and the showing reverted to the analog optical track, a very poor stereo reproduction with terribly compressed quality audio. As such, I did not see the 3D presentation of the film, but I'm not generally a fan of movies that have been post-converted to 3D on tight time frames.

Even despite some low expectations, The Green Lantern failed to make much of an impression on me. 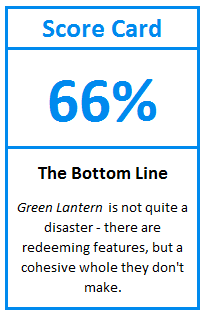