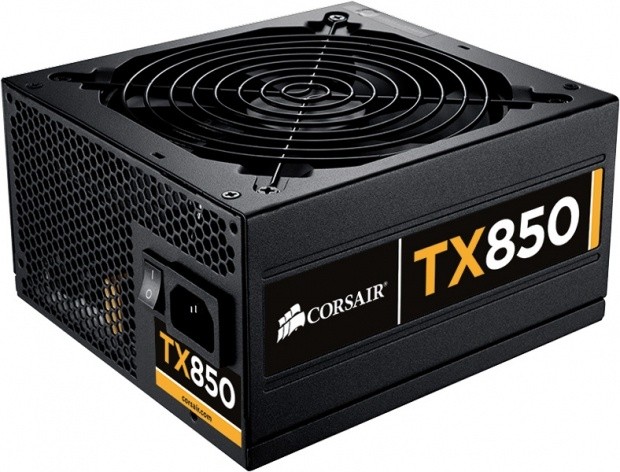 Back in 2008, Corsair launched the TX series of power supplies. It was an instant success and a power supply that many still love today. It provided plenty of power for gamers and enthusiasts and did so without breaking the bank. The TX series also offered great connector availability and longer cables for those with larger cases and those that routed cables to keep them from being seen. Corsair has been updating several of their power supply series and the TX series is the latest in the line of refreshments.

Fast forward to today and we now have the Corsair TX Version 2. The specific power supply on the bench right now is the Corsair TX850V2. On the surface, the TX850V2 differs little from its predecessor. Connector availability remains the same and if it wasn't for the sticker denoting it as a TX850V2 instead of a TX850W, you probably wouldn't know they were different.

Corsair took a good look at the internals and decided to make some changes there, bringing with it improved efficiency and higher quality DC output. Read on as we take an in depth look at the Corsair TX850V2.

Taking a look at the power rating chart, those familiar with the TX850W will notice that the TX850V2 has a little less power on the minor rails; 25A each. Power available on the 12V rail has remained the same, providing up to 70A under full load. 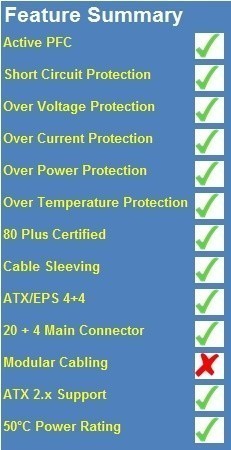 The TX850V2 has a great list of features going for it. Aside from the current, voltage, circuit, and power protections, the TX850V2 has fully sleeved cables. Before, the cable sleeving stopped just short of entering the power supply and now goes all of the way inside. The power supply has also been updated to comply with ATX V2.3. The TX850V2 is rated for 100% continuous output at 50C. Perhaps one of the largest changes to the TX850V2 is that the power supply is now 80Plus Bronze certified instead of simply 80Plus certified. This means a tad bit more efficiency has been squeezed out of the unit.

Those looking to get their hands on the TX850V2 shouldn't have any trouble as it is readily available. Corsair has set an MSRP of $139 on the TX850V2, but a little bit of searching will yield cheaper results as usual. Newegg currently has the power supply with a $20 mail-in rebate dropping the price down to $119, and that includes free shipping. Warranty for the TX series power supplies remains unchanged and they will be covered for 5 years. 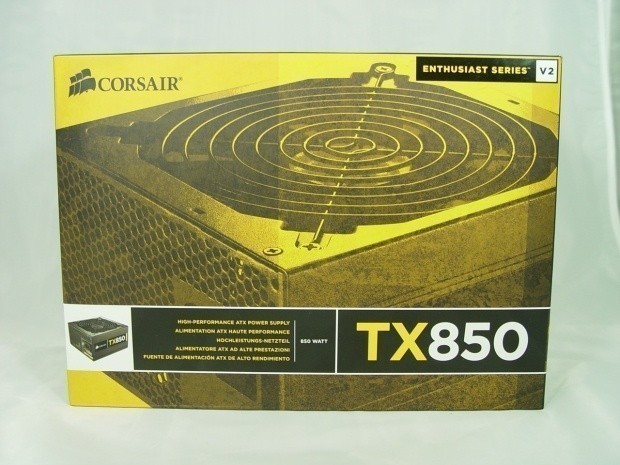 The Corsair TX850V2 comes in black and yellow packaging with little information on the front other than the wattage. 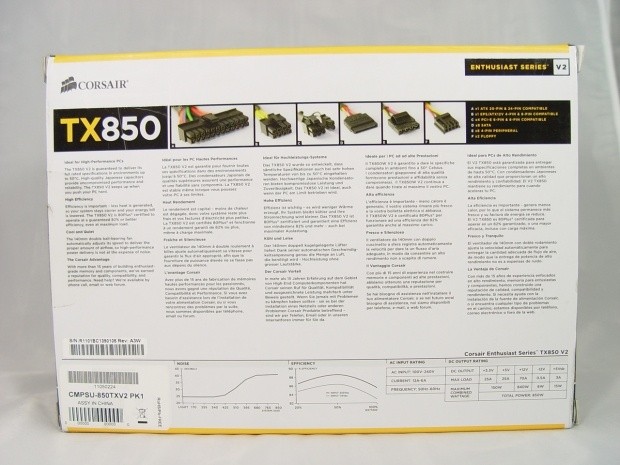 On the back we have a connector availability chart at the top. There are some charts at the bottom denoting efficiency, noise levels and DC outputs. 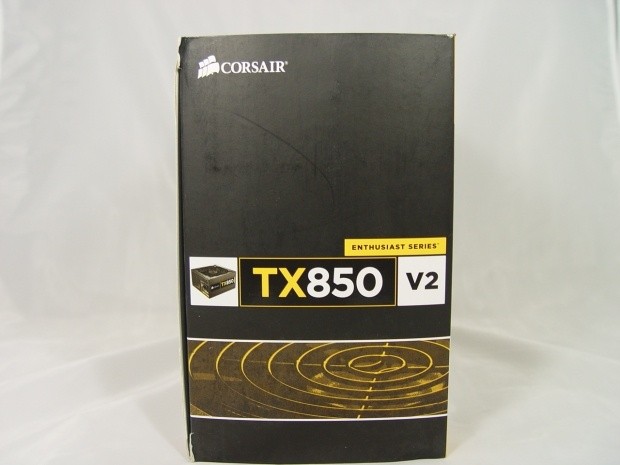 Both sides are the same and devoid of any information other than make and model. 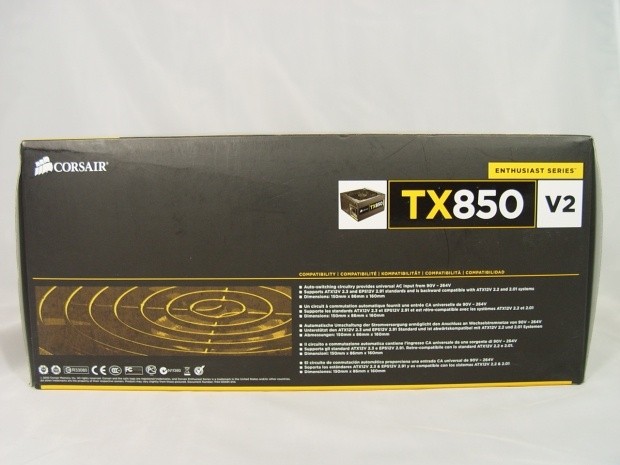 Taking a look at the bottom reveals a little more information, letting us know the dimensions of the power supply and that it supports ATX V2.3 standards. 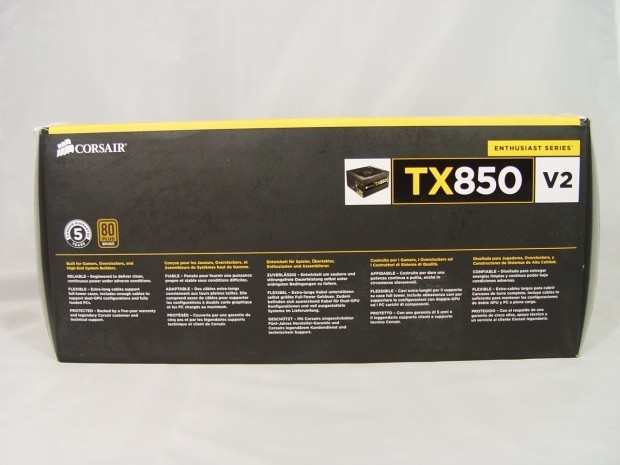 The top of the box finally yields the warranty information and 80Plus Bronze certification logo. 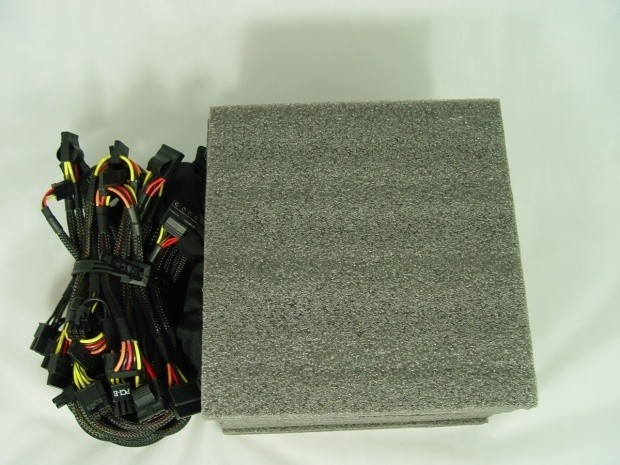 The TX850V2 is packed well, with at least a 1/2 inch of foam protecting the power supply on all sides. As you can see, all of the cables are natively wired. Be prepared to be attacked by an octopus as soon as you remove the cable tie keeping them bundled. 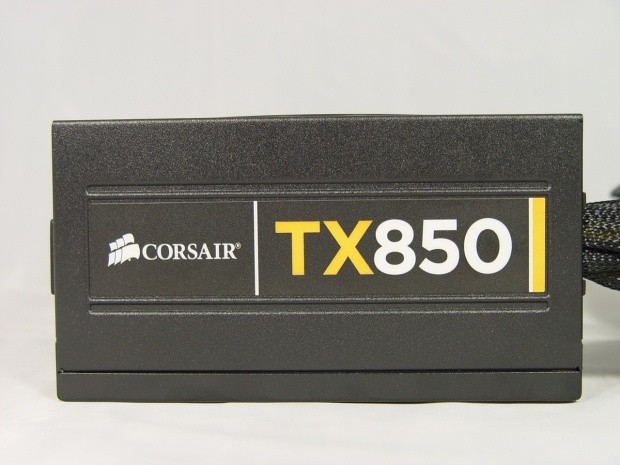 On both sides are the TX series logos. 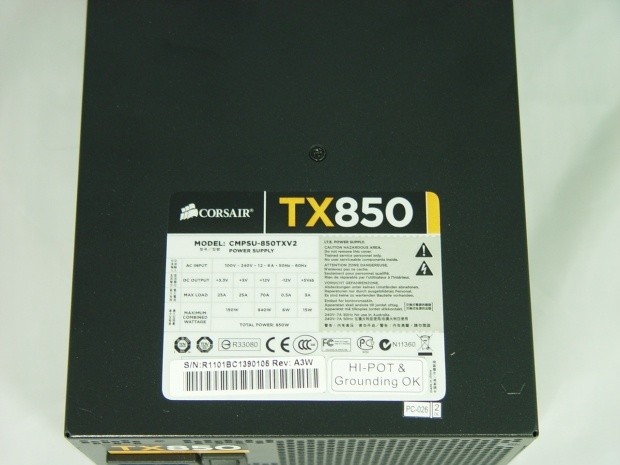 Corsair has located the I/O specification label on the top of the TX850V2. The single screw that you see is for a standoff that helps support the PCB inside. 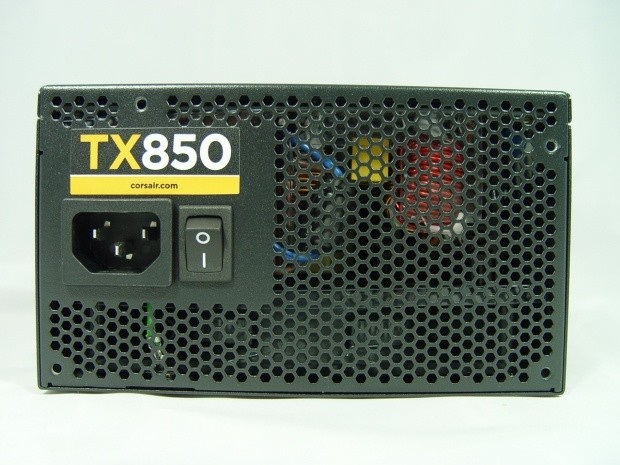 A glance at the back shows us the AC input, on/off rocker switch, and honeycomb grill for ventilation. 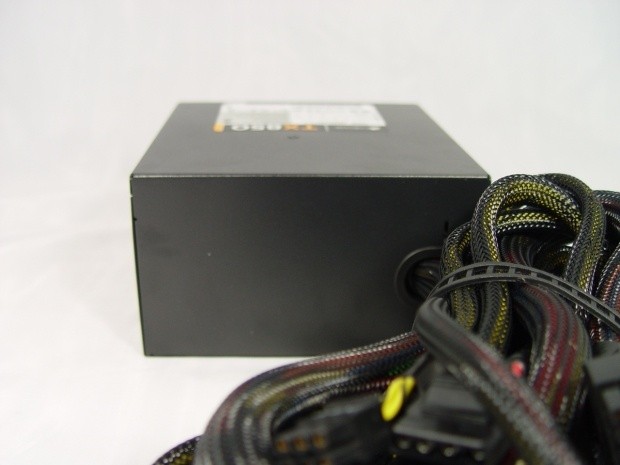 Since the TX850V2 features natively wired cabled, there isn't much going on here at the front of the unit. 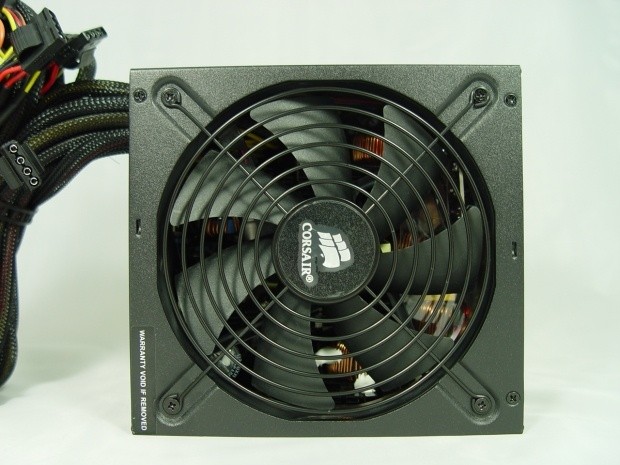 Moving to the bottom, we can see the large 140mm fan with wire grill that cools the TX850V2. 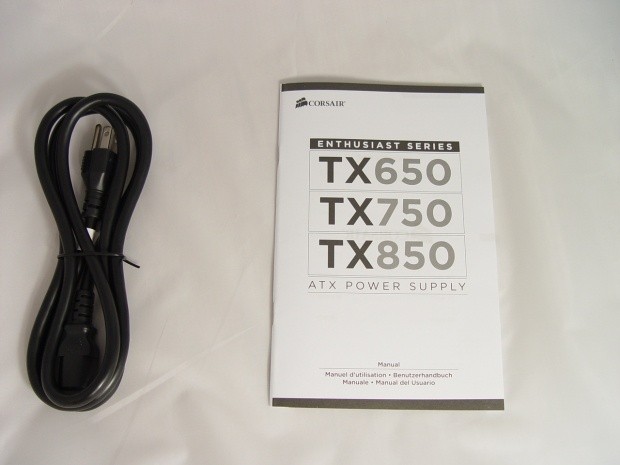 Also included in the box are the user manual, AC power cord, black mounting screws, and some zip ties.

Taking a look at the connector availability reveals that nothing has changed between the TX850V2 and its predecessor. There is the mandatory 20+4 Main connector and a single ATX 4+4 connector. To power graphics cards, there are a total of four PCI-E 6+2 connectors. Powering the rest of the devices are eight Molex connectors, six SATA connectors, and two FDD connectors. All of the peripheral cables have great length to them, should it be needed.

Since the TX850V2 just got a refresh, it would have been nice to see a few changes here. It is rare that you will find a use for a single FDD connector these days, let alone two. It is also just as rare that you will need more Molex connectors than you will SATA. Finally, we only have a single ATX 4+4 cable. While this is sufficient for many applications, we strongly feel that any power supply meant for enthusiasts should have two ATX 4+4 connectors. These are of course minor issues and most won't utilize half of the connectors available, let alone run into the issue of being short a few. 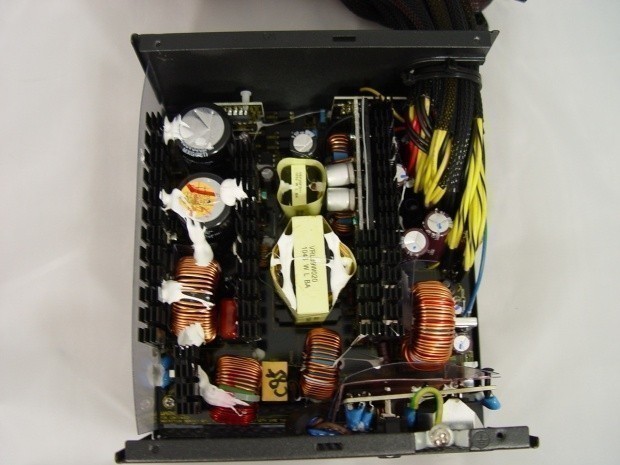 Opening up the power supply reveals a very clean layout with several heatsinks to allow for excellent cooling of the TX850V2. One thing that is very nice to see is that the cable sleeving now extends inside the power supply. Previously, it stopped about an inch short of power supply. 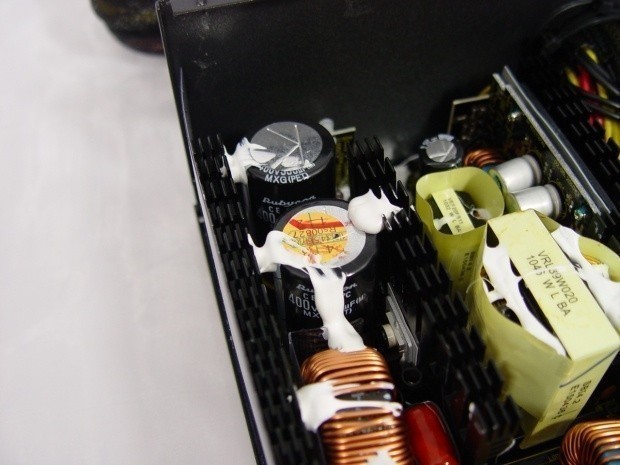 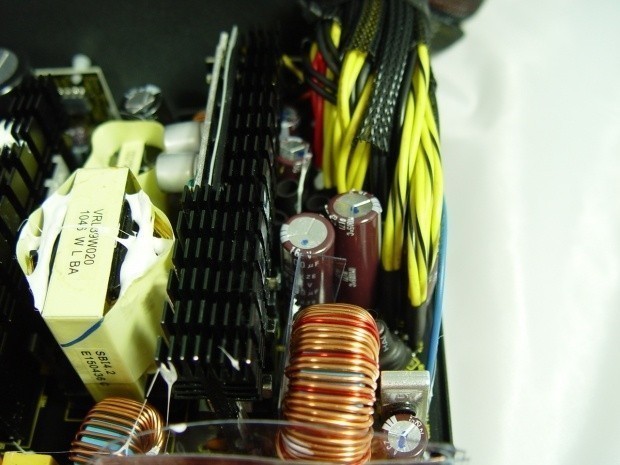 Over on the secondary side, Corsair favors the Japanese made Nippon Chemi-con capacitors. There are also a handful of Rubycon capacitors in here as well. 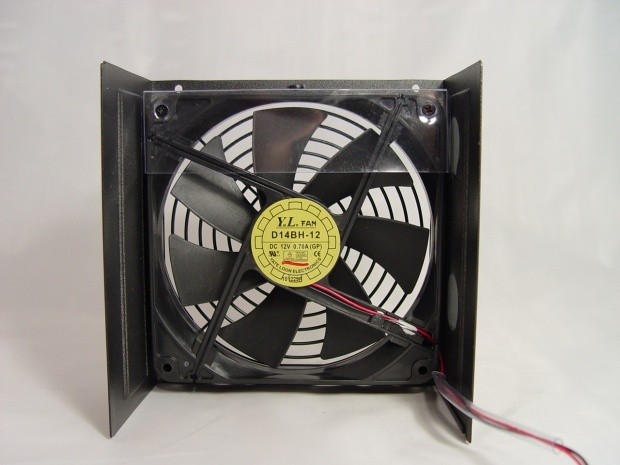 The ever popular Yate Loon D14BH-12 is back again with the TX850V2 providing the cooling for the unit.

The tests performed are based around six conceivable setups that are out there and progressively load down the PSU up to the power supply's limits or 1000W, whichever comes first. Since our test equipment's limits lower than that of the Corsair TX850V2, we can test it to the maximum.

After running the TX850V2 through all of our tests, we were quite pleased with the results. As you can see in the chart above, everything is well within specifications. While the voltage regulation isn't the most spectacular that we have seen, all three rails managed to stay within 2% of their specified values. In fact, they weren't that far off from being within 1% as the worst deviation from the ATX specifications was 1.4% on both the 5V and 12V rails, with the 3.3V rail being the best at 1.2%.

Out of all the tests ran on the Corsair TX850V2, the ripple seen on the 12V rail is the most impressive. Starting out, it was hard to even see the noise on the oscilloscope during the first test. As you would expect, the ripple seen grew as the loads were increased on the TX850V2, but the changes were small. Even under full load, the power supply reaches a maximum of 22mV peak to peak of noise on the 12V rail.

Aside from the improved quality of the DC outputs, perhaps the best area of improvement in the TX850V2 over its predecessor is the improved efficiency of the unit. While the TX850V2 does very well in the first four tests, it starts cutting it a little close towards failing to achieve the 80Plus Bronze rating during test five. Out of all the changes that Corsair made, we would have liked to have seen a little more improvement in the efficiency department. Normally it wouldn't be such a big deal, but the TX850V2 just got an overhaul and these days are all about going green and being eco-friendly. Corsair offers several 80Plus Silver rated units and even managed to get the recently reviewed AX1200 to 80Plus Gold. Nevertheless, it still passes as it achieves its claimed rating, but it would have been nice to see at least a Silver rating out of the overhaul.

Corsair has done a great job with the TX850V2. They took all of the good of the original TX850W and made most of the improvements needed to produce another rock solid power supply. While the TX850V2 produces solid numbers for voltages, noise, and efficiency, they aren't the best we have seen out of an 850W power supply. One must keep in mind, though, that this is not a power supply designed to be the Holy Mecca of the 800W-900W ranged power supplies, but something for the masses that will provide solid, stable power for years to come even under extended periods at full load.

Overall, the updates made to the Corsair TX850V2 were great. However, there are a few areas that we would have liked to see the TX850V2 improve on. Efficiency is certainly the area that we would have liked to see a larger change, but the unit does perform just as it is rated. We also wish that the connector availability had changed just a little bit. You will be very hard pressed to find a new system with any Molex or FDD connectors in it these days, and even most older systems that you are putting a replacement power supply in will only have a handful of Molex connectors and maybe a single FDD connector. It would have been nice to see a few more SATA connections and perhaps a second ATX 4+4 connector instead.

With all of that being said, the Corsair TX850V2 delivers where it matters most and that is in the area of voltages and regulation. Corsair adds some icing to the cake with the sweet $119 price tag, making the TX850V2 hard to beat unless you are looking for a power supply with better efficiency. 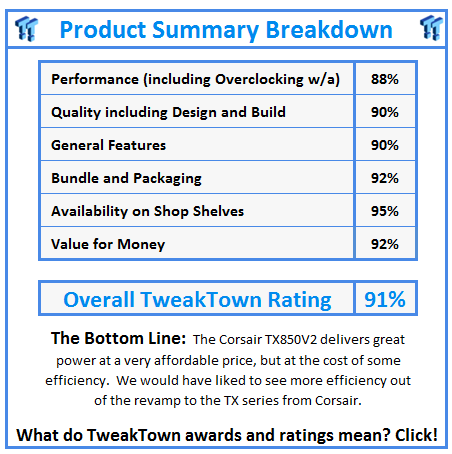