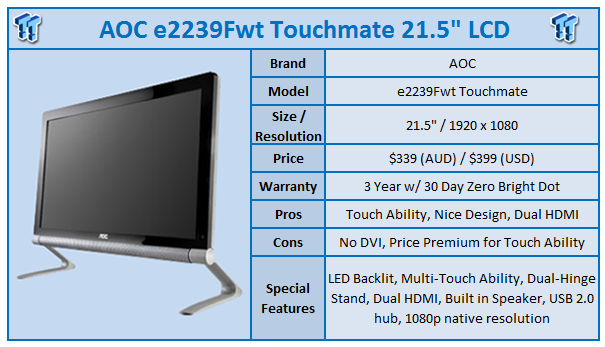 I'm a huge fan of touchscreen based PCs. Every time I go to my local computer store I can't help but go in and start touching the screen and navigate through a few windows before I move on.

Until now, though, there hasn't been much outside of pre-built PCs when it comes to getting in on the touch screen action. Today, however, AOC bring a 21.5" screen that looks to be the goods for people who want to get their touch fix.

Inside the package we've got nothing that you wouldn't really expect with a VGA and HDMI cable, USB cable along with the standard paperwork and driver CD. It's probably what's not included which may surprise and that would be a DVI cable, which is something we're used to seeing in our monitor bundle. There's a reason it's not included, though, but we'll cover that later. 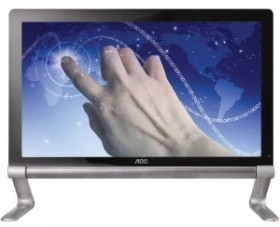 Looking at the e2239Fwt specifications, the monitor seems to have the goods with an LED backlit display that has a native resolution of 1920 x 1080, offering a 5ms response time and 20,000,000:1 dynamic contrast ratios. The screen itself comes in at 21.5" and offers both VGA and HDMI on the video connection front. Other connectors on the screen include USB, audio jack and a second HDMI port. 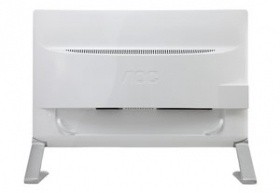 Something missing is of course, a DVI connection, and it's not a huge deal with most cards offering HDMI these days, but it's something that you do have to realize as if you don't have a HDMI connection on your card you're going to have to opt for the ugly analogue connector.

With the monitor connected via HDMI and a USB cable connected to enable the touch screen ability, the setup of the monitor is extremely easy. Once in Windows we installed the driver, rebooted and were ready to go with the e2239Fwt. 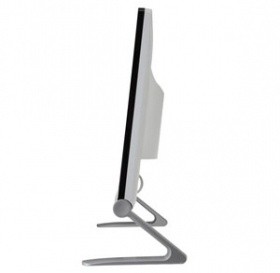 With the monitor up and running I took a second to quickly just look at it and it's really quite a good looking monitor. Across the bottom we've got a sound bar and the "Dual Stand" design that AOC has opted for means that the keyboard or even a laptop can sit under the monitor.

This is a great idea, because you would have the monitor closer to you then a normal monitor controlled with your mouse. Of course, if you need access to the keyboard to type faster you can just pull it out quickly. There's also a fair bit of room under the screen so that if you're using the screen with a laptop you could just move the laptop forward slightly and slide your hands under and type with ease. Of course, it would depend on the thickness of the laptop in hand. 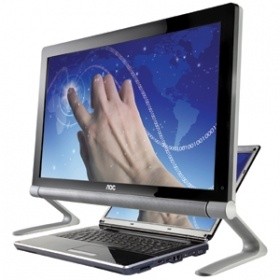 Moving on from the aesthetics and onto the actual screen, the e2239Fwt is a nice looking screen. The LED backlit design makes the screen nice and bright, while keeping power draw at a very nice level of around 21w.

As we mentioned, the monitor comes with a built-in speaker and if you're using HDMI you shouldn't have an issue getting sounds to the monitor with the same cable doing the video. Quality isn't that bad. Sure, you're not going to get the house pumping with it, but for a bit of music or just some general YouTube video it does a good job.

Of course, you can use the monitor as a normal one and do everything you would with a standard one including playing games, and the e2239Fwt does a good job of handling them. Sure, it's not as strong as other monitors we've looked at in this respect, but it does a good job nonetheless.

On to the touch screen ability of the screen, it supports multi touch and is very accurate. It's easy to use and works well, but the question you have to ask is, 'Where is the touch ability best used?' - Most of the touch screen based PCs tend to be orientated around media centres and we've got to say that this is the best target market.

Navigating around Windows is extremely easy and that includes everything from using the start menu to navigating around your hard drives. It's here that you can really see how the touch screen works great, selecting media to play or navigating photos.

Where I could see the screen being extremely impressive is a really nice home theatre setup where someone has a projector. Have a bit of room in your cabinet and you could navigate a real home theatre PC, play music and do little things without the need to put the actual projector on.

We can't deny that for most the e2239Fwt isn't going to be something you look at, because it's not worth paying the premium that's associated with the Touch Screen ability. But if you don't want to fork out $1,000s for a full-fledged brand name PC that comes with a touch screen, this is such a better option.

It's easy to say the e2239Fwt is pointless, a waste of money and unnecessary, and for most people it is. The touch ability is similar to a car that can carry seven people, but you don't have any children nor do you really drive anyone around. It's a feature that is useless to some, but handy to others.

The e2239Fwt isn't going to be for everyone, but if you're interested in getting in on some touch screen action this is a really nice display that lets you do it without a massive price premium.