Monster House tells the story of three neighbourhood kids and their archenemy whom lives down the street - the feebled, but feared old man Mr. Nebbercracker (Steve Buscemi) whom relishes destroying the toys that stray onto his lawn. But when Mr. Nebbercracker succumbs to a heart attack and dies, the kids soon come to realise who the real monster was all along. For a non-Pixar release, Monster House is a very decent, family-friendly, yet not adult-insulting feature. I particularly enjoyed the animation that sets the films look apart from others.

Monster House in 3D is the first feature length film I've seen in the home theatre environment. Of course, I've seen all the big hitters including Avatar and Alice In Wonderland in 3D, but sitting in the home environment makes for a fairly different experience. Basically, the reservations that I extended in this article have generally come to pass. The biggest issue is the size of the screen and the fact that it does not fill the entire peripheral vision. By being consciously and subconsciously aware of what is happening around you, it does at least for me, destroy the 3D effect that in the cinema is so enveloping. Readers may differ, but I'm a little hesitant that 3D in the home is indeed the future. But I'm sure we'll have plenty of time to discuss this in the future. 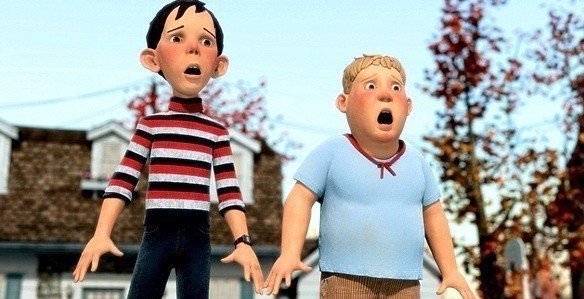 Monster House is presented in a widescreen aspect ratio of 2.40:1, its original aspect ratio. Unlike the previous 2D release encoded with MPEG-2 compression, the 3D version is encoded with the more efficient AVC MPEG-4 codec.

Included on the same disc are both 3D and 2D versions of the film. Since the previous 2D version has been on the market for near on three years, I'll just focus on the 3D version of the film.

Emerging directly from the digital files of the film, Monster House does look a treat, but also inherently different to many other computer generated offerings. For starters, animators seem to be trying to emulate the stop motion animation of The Nightmare Before Christmas and Corpse Bride rather than Toy Story or Shrek. Coupled with the subdued colour palette and light artificial film grain, Monster House makes for a decidedly unique CG animated feature. However, I'm happy to say that the Blu-ray encode is up to the job. It does a superb job at everything the film throws at it.

The 3D effect presented is very good. I noticed it's a little bit inconsistent with the presentation of depth from scene to scene, but overall it's rather good.

Overall, a very pleasing transfer in both 2D and 3D incarnations.

The main audio track is encoded in DTS HD Master Audio 5.1, at 24 bits. Again, this differs to the original 2D Blu-ray which was encoded in Uncompressed PCM. I'll note that I detected no differences in the audio quality between the two releases.

The sound design of Monster House reflects that of the house itself; it's very aggressive. At all stages of the movie the rear effects are alive with action. Animators have done a very good job of retaining lip sync with the characters mouths and the audio is always intelligible.

Bass activity is very deep and very low. During the climax of the film one scene in particular was so deep and groaning that I thought that I surely would incur some damage, but all was well.

Monster House definitely has the most aggressive soundtrack that I have heard attached to a computer generated feature. Demo worthy all the way.

Sony has ported all the extra features over from the 2D Blu-ray. It's not a massive abundance, but what we have here is good. Let's jump in.

First up, the Audio Commentary is provided by unnamed members of production. It's a pretty lively affair despite not knowing the relevance of who is speaking, but they certainly impart quite a bit of knowledge during its short run time.

Seven Featurettes make up a 24 minute documentary entitled Inside Monster House. However, you can choose to watch these individual bite-sized featurettes if you wish. The most interesting of these is the Black Box Theatre Featurette which shows the extensive use of the motion capture technique (think Avatar) which gives the film its unique feel of animation.

Next up is the 20 minute Evolution of a Scene: Eliza VS Nebbercracker featurette which shows in depth the stages between rough storyboards to rough CG animation and finished film footage. It's a nice glimpse into the process that some take for granted that a computer does everything. 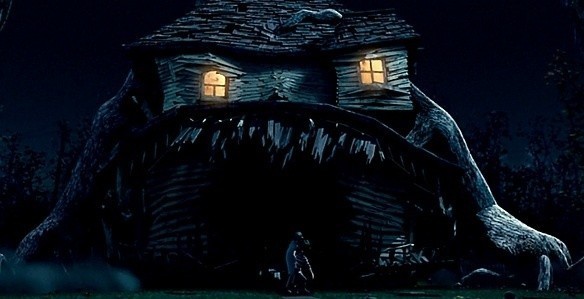