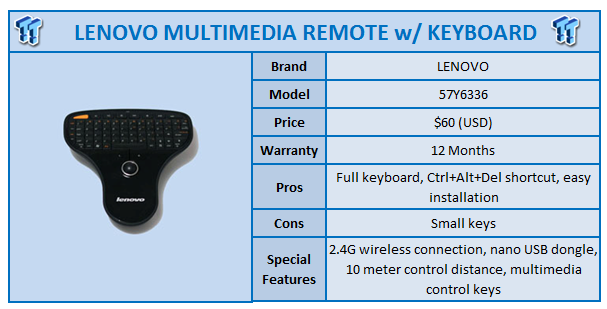 A Home Theater PC is the Swiss army knife of home entertainment systems. Capable of playing every format under the sun, from iTunes downloads to Blu-ray disc, the HTPC is unrivaled by media boxes and disc players. In addition to better compatibility, the increased horsepower afforded by PC components often results in better quality as well.

One area where the HTPC is still lagging behind all-in-one set top solutions, however, is the ease of control. While front-end software exists to bridge the gap between the power of the PC and the usability of a set top interface, the occasional need to control a HTPC as a PC can still be necessary. That's where the Lenovo Mini Wireless Keyboard fits right in. 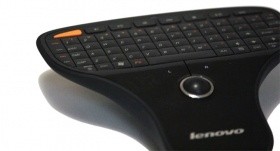 Bearing a slight resemblance to the Playstation 3's wireless keyboard, the Lenovo keyboard remote offers all the functionality of a regular keyboard (including the Windows key and controls for media playback) as well as a trackball with left and right mouse buttons. A function key allows single keys to pull double duty, including an interesting addendum to the "Enter" key that performs the three-fingered salute (Ctrl+Alt+Del) to help get you out of those sticky situations where a marathon viewing of America's Next Top Model might result in a system crash. Given the contours of the remote itself, along with the small keys, it's nice to know that Lenovo is looking out for these kinds of occasionally unavoidable scenarios, as I'd hate to imagine trying to pull off that maneuver without the helpful shortcut.

Another interesting button is bright orange and has no label, so of course it's screaming just to be pushed. Doing so only brings up the "My Computer" window. Frankly, I'm not quite sure why one-button access to "My Computer" is necessary, but if you're looking for such functionality, there it is.
Installation of the remote is simple. Removing the battery cover reveals a miniature USB dongle. Simply pull it out of its bay inside the remote, plug it into a free USB port on your HTPC, then flip the switch on the back side of the remote to the "ON" position. Windows 7 instantly detected the dongle and within seconds the remote was working perfectly, even from a couch-seated position. 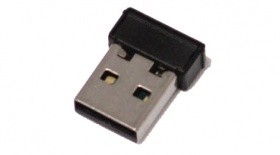 In order to test the remote in real-world home theater situations, I hooked up a Sony VAIO laptop via HDMI to my flat-screen television and used the remote in conjunction with Windows Media Center. The first thing I noticed was that using the remote with Windows Media System in typical "set top interface" fashion was almost out of the question. While you can use a combination of arrow/Enter keys to navigate options, the small size of the buttons made it simply easier to use the built-in trackball and select options with the mouse cursor. Navigating this way isn't quite as elegant as using the navigation buttons on standard remotes in the way Windows Media Center was designed to work, but it gets the job done.


While Windows Media Center is great for the vast majority of multimedia viewing needs, iTunes purchases are another matter entirely. And while WMC is geared towards being used in a HTPC environment, iTunes most certainly is not, and this is where the Lenovo remote really comes in handy. Using just the remote, I was able to exit out of WMC, launch iTunes, and playback the latest episode of The Soup, switching it to play in fullscreen for the true television experience. This is something that the typical remote would be very clunky in pulling off, but since the Lenovo remote duplicates PC keyboard/mouse controls, it was relatively easy to accomplish.

Another non-HTPC compliant way to consume media is via Hulu. Currently, Hulu on PC is available only via your Internet browser (aside from third party WMC plugins), none of which is very easy to do with your typical remote. Using the Lenovo remote keyboard was great for being able to browse and launch content using Hulu, then switching to fullscreen playback and sitting back to enjoy the show. At one point, I even switched over to my e-mail client to compose a message. It worked well enough, though I won't be switching away from full-sized input peripherals any time soon. 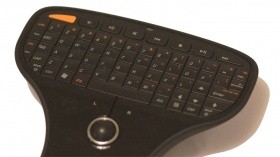 As mentioned before, the keys on the remote are on the smallish side. Bringing up this point is something I've often seen in reviews of this type, but here's my take on it. First, a confession; I don't have overly large fingers. In fact, I have what might be considered "piano player" fingers; thin and long. As such, I don't have a big problem with navigating around the small keyboard on the Lenovo remote. Those with Fred Flintstone fingers might want to think twice, however. Any remote that tries to duplicate similar functionality would look cartoonish in a form factor for large fingers, so one cannot fault Lenovo for not providing larger keys. It's a shame that so many keys are required to navigate through a PC or Mac interface, but that's the way it is. Of course, those who have learned to quickly navigate and compose messages with a BlackBerry should be right at home here.

If the size of the keys isn't a problem, the Mini Wireless Keyboard should be a strong contender in the control scheme of any HTPC. If you plan to only utilize the content you can play within Windows Media Center or XBMC, then more typical remote offerings may be better for your needs. However, if you're looking for the ability to easily control expanded offerings that you can pipe to your television via a HTPC, including iTunes and Hulu, then take a serious look at the Lenovo Mini Wireless Keyboard.