All NewsBusiness, Financial & LegalCases, Cooling & PSUContests & GiveawaysCPU, APU & ChipsetsDealsDisplays & ProjectorsGamingMotherboardsScience, Space & RoboticsStorageVideo CardsVirtual & Augmented Reality
All ReviewsAll ArticlesAudio, Sound & SpeakersCases, Cooling & PSUCPUs, Chipsets & SoCsComputer SystemsDisplays & ProjectorsGamingMotherboardsNetworkingPeripheralsRAMStorageVideo Cards
GuidesGamingAsk the ExpertsNewsletterAboutForums
RTX 3090 TiRTX 4090Diablo 2GTA 6Halo InfiniteElon MuskRTX 3080HDMI 2.1
TV, Movies & Home Theatre
Blu-ray Movies
Not too much can be said without ruining the twists of the film, but I'll do my best. A mysterious man Steward (Frank Langella) arrives at the home of an unassuming Virginian couple (Cameron Diaz and James Mardsen) offering them $1 million dollars in return for pushing the bright red button housed inside the titular box. However, in doing so someone they don't know, somewhere in the world, will die. Not much contest you may think, however, the resulting chain of events may outweigh the generous prize.

Director Richard Kelly's films polarise critics. Some applaud his tenacity, whilst others decry his convoluted scripts and plot threads which invariably go nowhere. I am afraid I fall into the latter category. For starters, I think Donnie Darko was an accidentally good film. That is, the budgetary constraints made him produce a better film. When Kelly had the opportunity to tinker with the film ala George Lucas for the later Directors Cut, an inferior film was the result. The Box unfortunately tries to shoehorn too much into one film, with too many plot elements that fail to pay off and ultimately confuse and annoy the audience, ultimately unraveling in the final third of the film. However, just like Donnie Darko, there will no doubt arise a cult of fans for the film on home video. 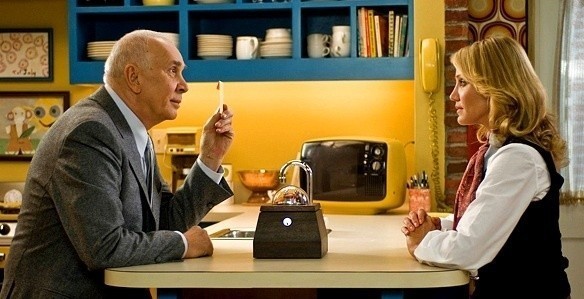 The Box is presented in a widescreen aspect ratio of 2.40:1

As Richard Kelly notes in the audio commentary, he decided to film The Box on HD video rather than film after seeing the results of Zodiac. Subsequently, the film looks as clean as a whistle. However, it does make the film look a little artificial. Kelly has also whacked the image with quite a few filters to obtain a 1970's look and this shows up well.

The image is sharp and well defined. Colour balance is a tad on the muted side, but this is no doubt to evoke the time of the films setting.

Overall, a very good effort; it just looks a little artificial to my eye.

The main audio track is encoded in DTS HD Master Audio 5.1, at 24 bits. Strangely, Icon has also given the option of a Dolby TrueHD audio mix, too, which seems a bit arbitrary, but no less welcomed.

I was quite surprised how good this track actually is. I think the best thing I can say about it is that nothing particularly stood out whilst I watched it, it all helped the viewer settle into the film. The atmosphere generated is very good and very enveloping.

I thought the score soundtrack was particularly good. It's very different to what you often hear today, almost a throwback to the soundtracks of Hitchcock. I was also surprised to find that members of the band Arcade Fire are responsible - I'm a pretty big fan, especially of the 2005 song 'Wake Up'. Great stuff, and for me this was probably the highlight of the film.

Theres only a few things here, all relatively short in length.

Audio Commentary is provided by Richard Kelly. For someone who enjoys letting the films speak for themselves and being open to interpretation, I'm not sure why he would feel the need to commentate on his movies. Still, for those scratching their heads he illuminates certain aspects of the film, for the intended interpretation. On other plot points he lets the viewer decide. I feel that maybe he digs his own work more than others.

Next are three short featurettes, the first being The Box: Grounded in Reality which interviews Kelly and his parents, revealing how much of the film is based on events of their own lives (which did little to dissuade me of the self-indulgence of the film). Visual Effects Revealed gives a brief insight into the rather good visual effects of the film (notably the deformation of Frank Langella's face). Finally, Richard Matheson In His Own Words is a very brief interview with the now elderly writer, giving a brief overview of his career. I would have enjoyed this much more had it been five times longer.

Music Video Prequels aren't so much music videos, but small video segments which serve to act as very short prequels to the film. The music is not performed by some rubbish band, but are segments of the film score. Baffling, but somewhat interesting at the same time. I'm not sure what these were actually produced for. 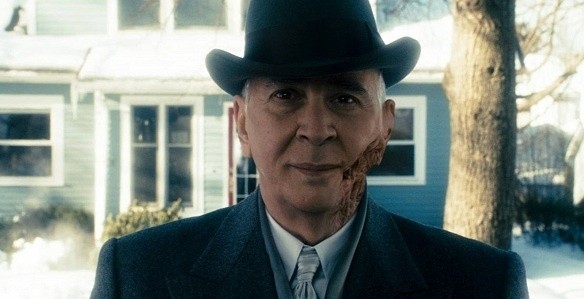