When I was around 4 years of age, my parents let probably what they assumed would be a perfectly fine kids fantasy film, babysit me for a few hours. One of my earliest memories is the constant nightmares that followed this viewing. In discussions in the years since, it seems that many people of a similar age had much the same experience. 20 years on, Labyrinth holds up pretty well and I am glad to say that this viewing of the Bu-ray version was a lot less traumatic. In fact, I enjoyed it quite a bit.

When Sarah (Jennifer Connolly) in a fit of anger, summons Jareth, the Goblin King (David Bowie) to take away her troublesome brother, she's surprised when he actually substantiates in her bedroom and whisks him away. If she doesn't mount a recovery effort within the next 13 hours, he will be gone forever. The issue is; her brother is in the middle of the Labyrinth, an intricate maze of puzzles and goblins and creatures faithful to Jareth who want to see her fail in her quest...

The product of the minds of Jim Henson and George Lucas, with songs performed by the glitzy and borderline camp David Bowie, Labyrinth is a visually stunning, albeit slightly dated film of whose production methods has long since passed. The charm of the film is in the puppetry, but if this film was created today, it would certainly be created in the CG realm. 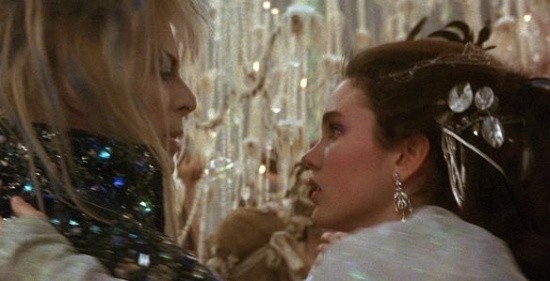 Labyrinth is presented in the widescreen aspect ratio of 2.40:1, encoded in AVC MPEG-4 compression.

Filmed on mid 1980's film stock, Labyrinth scrubs up relatively well in this new transfer. Sharpness is, across the board very good. Colour is just a tad muted and at times the image takes on a hazy look, but again this is a fairly minor criticism. A few scenes, with matting and rotoscoping fare worse than most scenes, with a distracting amount of film artifacts and overtly visible black lines surrounding characters. However, this is kept to a minimum and is only really noticeable in one sequence with multiple puppets.

Overall, Labyrinth has had some obvious care and consideration to the video restoration and looks far better than it ever has on home video.

The main audio track is encoded in lossless Dolby TrueHD at 24 bits.

From what was originally a stereo source, audio engineers at Sony have created a pretty convincing surround sound remaster. Fidelity is a little strangled, especially in the upper registers, but this is indicative of the original recording methods. There is plenty of bass, but a lot of it is slightly ill-defined and more 'rumbly' in nature.

I didn't spot any overt audio sync issues (obviously some of the puppet dialogue is a little off). The score provided by Trevor Rabin mixes well with the David Bowie songs. For such a talented artist, none of the songs here can really be deemed 'classic', however "Dance magic, dance" is the highlight of the soundtrack.

Overall, a pretty pleasing audio track here. It would have been nice to have had the original stereo audio track as well, though.

Adding at least one worthwhile extra to this Blu-ray, in addition to mostly retaining the (quite good) original DVD features, Labyrinth has a decent enough extras package.

First up is the Audio commentary provided by Henson conceptual artist Brian Froud. Whilst he is probably more remembered for his work on the other Henson film The Dark Crystal, he provides all manner of detail on the production of the film and does well with his recollections of over 20 years ago.

The Storytellers: Picture in Picture track is a little sparse in content but imparts a fair amount of information as the movie plays. It was certainly nice to see Hensons grown up daughter talk fondly of her father and his intentions with the film.

Inside The Labyrinth: Making of Documentary at nearly an hour in length, does a particularly good job at rounding up the principals, including Star Wars creator George Lucas. It's extremely in-depth and touches on all parts of the production, including the lavish concept art, the onset madness of the puppets and Bowies contributions. Fans of the film will eat this up.

Next up are two further Featurettes; the first entitled Kingdom of Characters which lingers half an hour on the puppeteer aspects of the film. Journey through the Labyrinth spends a little more time discussing how the film came together from the original concepts. Both featurettes could probably have been folded into the previous documentary and created a mammoth two hour experience, but their isolation is probably for the best in terms of flow.

Unfortunately missing from the previous DVD is the theatrical trailer. I hate it when studios do this. 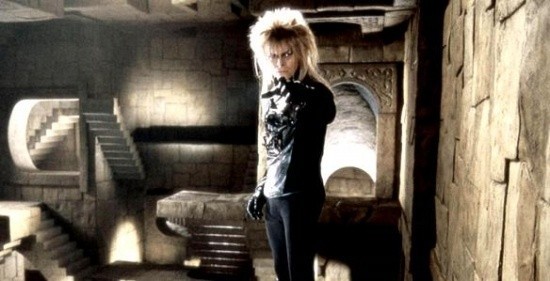