Unfortunately, the enjoyment of this film is directly related to the familiarity with the TV series, as this sits between the second and third series. My age means I just missed the craze of the mid 80's and I haven't gone back to watch them. At this stage I probably won't. And while I am familiar with some Transformers lore, most of this film went over my head, and mostly appears as an hour and a half of battle scenes, fused with a rockin' electric guitar soundtrack. However, in the interest of reviewing the basic plot of the film, I'll take a stab. The evil Decepticons have taken control of Cybertron, the Transformers home planet, and decide to attack Autobot City, which results in the slaughter of many Autobots and will have dire consequences for the force of good in the galaxy. 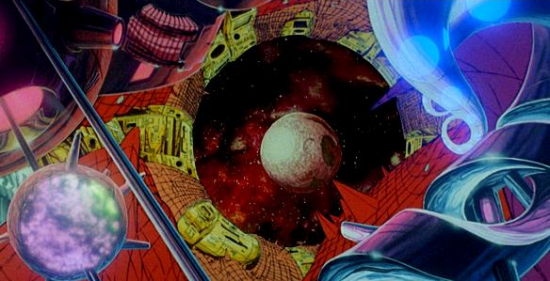 Transformers: The Movie is presented in the aspect ratio of 1.78:1, encoded in MPEG-2 compression.

I doubt that the movie had a particularly massive budget for the time, and whilst the animation is interesting enough, it does look a little rushed, and a bit budget. The cel animation process, completely unrestored, is very dirty. In almost every frame there is evidence of scratches, dust and other crap embedded in the layers of animation. I doubt a complete restoration would be cost effective.

As it is, the transfer looks reasonably sharp, and apart from the aforementioned film artifacts, it looks to be in better shape than I would expect. Colour balance is for the most part, quite good. There is a fair amount of telecine wobble, which is not often seen these days, probably exacerbated by the cel animation.

Overall, Transformers: The Movie features a better transfer than I expected, especially taking into account the low budget, just let down by far too many film artifacts.

It's a tad unfortunate that disc producers didn't go the whole hog and produce a lossless audio track, but what we do have is quite good. Audio mixers have produced a fine mix from the original stereo track. Lasers ricochet from speaker to speaker, and the constant boom of bass is never too far away. Of particular note is the aggressiveness of the score mix, provided by Vince Di Cola, and rock songs performed by Stan Bush. These tracks firmly entrench the film in the mid 80's, but give it its charm.

I didn't spot any examples of overt audio sync problem. There was just a hint of distortion in some of the voice tracks, but a little research showed that Orson Welles (Unicron) was just days from death when he recorded his part and could barely speak.
Overall, a perfectly fine mix, but a lossless version would have hit it out of the park.

A cut above the recently released, bare bones UK Blu-ray, let's take a look at what the Madman version has included.

First up is the Audio commentary by Transformers 'expert' Chris McFeeley. Off to a fantastic start with his slightly arrogant comment touting his knowledge of Transformers lore as being better than most, he soon settles down and his statement ultimately proves correct. I learned more than I thought I ever needed to know!

The collection of Test footage and deleted scenes section (further down the extras list) has a few perfunctory scenes that made little sense (to me, at least) out of context.

The assembled collection of Trailers and TV Spots harken back to an era long since past. Additionally, there are some fantastic vintage toy ads included within. (of note is that probable rights issues means the kids faces are blurred out!)

Stan Bush: The Touch music video features the famous song, with some appropriate animation. They don't make them like this anymore. It's in pretty bad shape but it's inclusion is appreciated.

The Galleries and storyboards section houses some character artwork and original storyboards. I find these slightly boring.

The Biographies section is aptly named. It's all pretty basic text based info, similar to the good old days of DVD. Next.

Inside Interviews and Q&A houses some interesting interviews; one with voice artist Peter Cullen (Optimus Prime) and writer Flint Dille. I am not sure how old these interviews are, but I suspect they are more than a decade.

Finally, Bonus episodes houses two further Transformers TV episodes, the first entitled Scramble City which seems to tie into the movie and the second from the spin off Beast Wars series. Props to Madman for some relevant bonuses here. 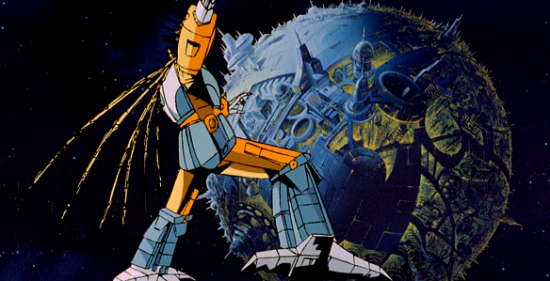