Portable storage is great and many enthusiasts have collections of USB thumb drives that we seem to acquire. My mother called me the other day wanting to know if she could copy and paste a Word Document to take to the office like she does with pictures. Even though she has never transferred a doc before she had three thumb drives sitting on her desk. If she has three then I know you have at least five!

NAND Flash memory is really changing the way we work with portable storage. USB has enabled us to take documents, pictures and other commonly used files with us for many years now, but the interface can now be referred to as slow since the capacity has grown into sizes of hard drives just a few years ago.

eSATA has been widely adopted by the industry and if your motherboard doesn't have a port on the back, most likely it comes with a bracket to give users access to blazing fast external storage. Even if your motherboard lacks any eSATA ports, most new PC cases have a dedicated eSATA port within reach making the tech accessible to all. The next generation of eSATA puts power at the port and in the coming months nearly every case will implement this feature. Power at the port is going to give eSATA the convenience of USB while maintaining the high transfer speed rates of SATA.

PhotoFast has been producing products that are on the cutting edge. Their G-Monster V5 and V4S push the limits of SATA and the G-Monster Promise PCIe takes solid state drives to the next level by eliminating the SATA bottleneck. For PhotoFast the horizon is just the starting point and they are now taking what they have learned from SSDs and moving it into the portable market. The new PhotoFast G-Monster eSATA V2 gives users SSD speeds and merges it with the convenience of USB. The end result is portable storage that is able to transfer data faster than many users primary hard drive. 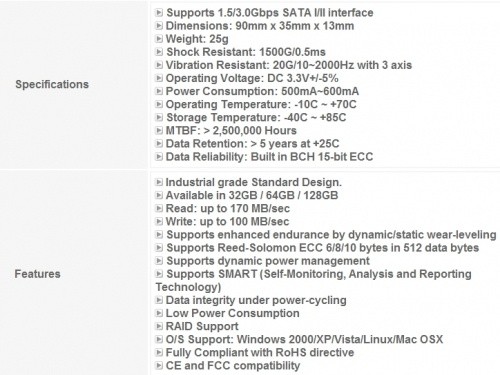 The G-Monster eSATA V2 is available in 32, 64 and 128GB capacities. Not too long ago the TweakTown labs were a buzz about the first 64GB USB drives being delivered, but that buzz was quickly washed away when we realized that transferring 60+ GB of data at 25 MB/s was really a drag. The G-Monster eSATA V2 still has a USB port and matches the fastest USB thumb drives when an eSATA port is not available, but once you kick it into high gear with eSATA the transfer speeds clime to 170MB/s read and 100MB/s write.

DVNation keeps the 64 and 128GB drives in stock and they are available now for 249 and 449 USD. The numbers might seem quite high, but Newegg shows the lowest priced 64GB USB drive as the Corsair Flash Voyager and it has a 169 Dollars price point. At 128GB the total cost becomes even closer, Newegg has the Corsair Flash Voyager GT in 128GB and it has a price tag of 399 USD. When it really comes down to it you are not paying a lot more for 5x the read speed increase and 4x the write speed increase.

Here we see the drive with the cap off exposing the eSATA port. 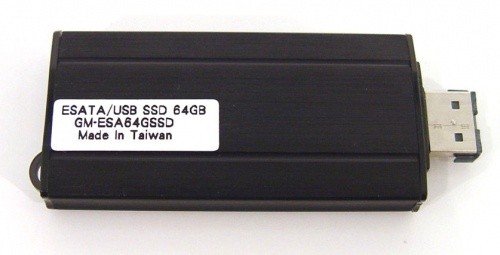 On the back PhotoFast has the model and capacity size listed on a sticker. 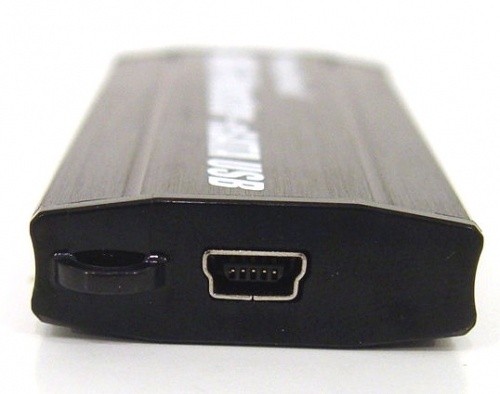 A mini USB port is located on the other side of the G-Monster eSATA stick. This allows users that do not already have self powered eSATA or you can use the drive as a USB thumb drive if an eSATA port is not available. 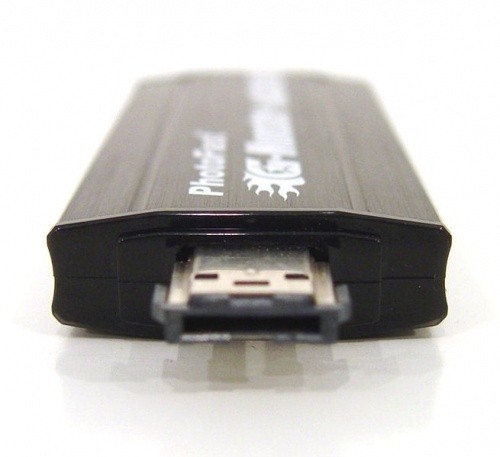 The preferred method will always be eSATA and here is a close up shot for users who may not be familiar with the connector just yet. 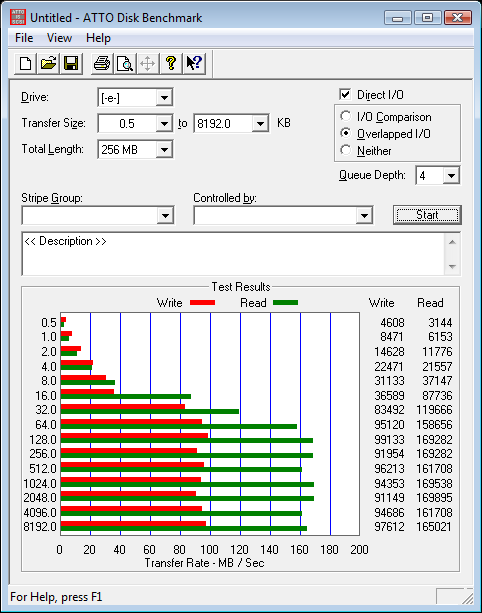 In ATTO the G-Monster eSATA V2 achieves performance numbers that are very close to those given by PhotoFast in their marketing material. 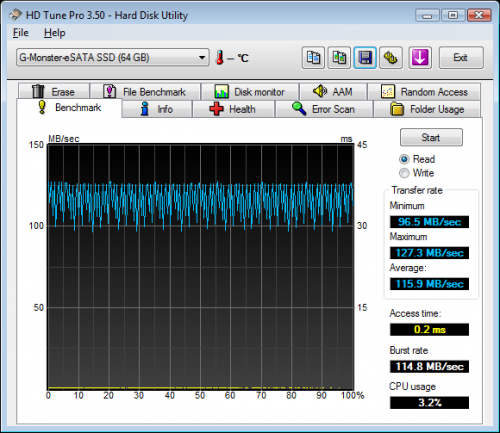 Read performance of a Western Digital VelociRaptor in a portable package that fits in your shirt pocket...check! 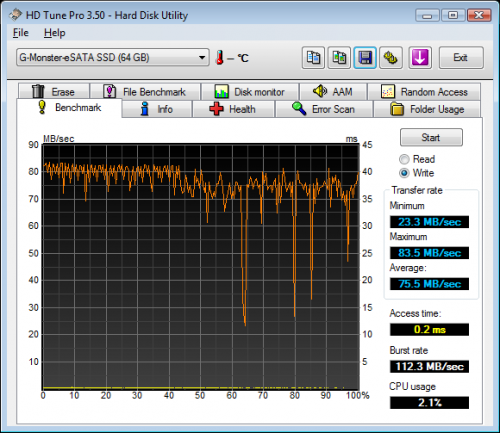 For the most part write performance is pretty steady across the drive, but there are a couple of dips. In real world performance these shouldn't be noticeable since they are very brief. 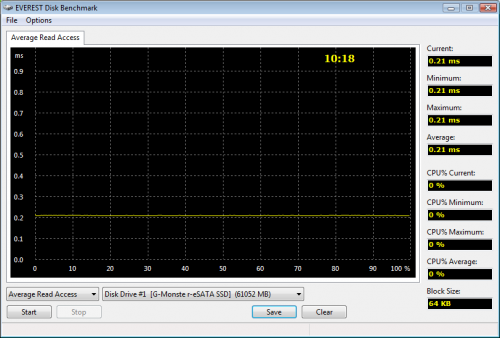 The read access times are a little higher than what we normally see in traditional SSDs, but the numbers that the G-Monster eSATA V2 gives us are still a lot lower than platter based drives. 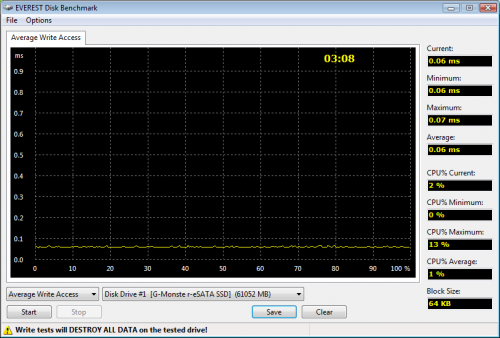 The write access times are spot on with what we are seeing from the fastest SSDs we have tested in the last couple of months. 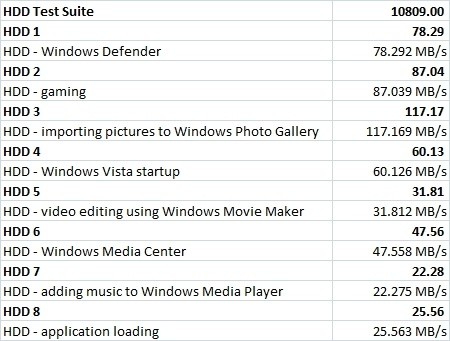 Is it just me or is it does everyone think it is strange for a portable storage product that fits in your hand to have better performance than what 90% of computer users have in their PC storage system?

The speeds achieved by the G-Monster eSATA V2 make it a great product for installing an operating system on for testing software before migrating it to your main system.

It is just not right! Here we have a full blown solid state drive that is small enough to carry in your pocket or on your key chain everyday and outperforms most people's internal hard drives. In the past I was skeptical at some of the claims coming from PhotoFast and their high-speed products, but now that I have spent time with all of their latest technology, I can say the company is for real and their products are some of the fastest we have seen.

High performance rarely comes with a mainstream price and the G-Monster eSATA sticks to this rule. At 249 USD for the 64GB drive that we tested today the drive does have a price premium over USB products with the same capacity. The 128GB model is a lot closer to the USB drives and it would be very easy to spend an extra fifty Dollars, but the 64GB model with an eighty Dollar premium may be a little tough to swallow if you can't wrap your head around the idea of transferring data in 5x the time it would take a USB drive. All it really takes is sitting through a large transfer to change your mind.

One of the most overlooked uses for these will be the ability to boot off of the G-Monster eSATA. There are times when I would love to break out an old game that would only work with Windows 98; Jane's USAF comes to mind right away. No one really wants to deal with dual or triple booting just to spend a couple of hours dropping bombs, but installing an older OS to a flash drive that can double as portable storage is very nice. Not to forget that your game will load a lot faster than it did on that Maxtor 30GB you use to play the game on.