George W. Bush (Josh Brolin) is played with conviction and largely avoids portraying him as the gaffe ridden moron that the popularist press did. The film rather disjointedly tells the story of his rise to politics through flashback, in amongst personal issues and family problems. As the film progresses it largely concentrates on the Iraq war and the choices his Cabinet made during, including Donald Rumsfeld (Scott Glenn), Dick Cheney (Richard Dreyfuss), Colin Powell (Jeffrey Wright) and Condoleeza Rice (Thandie Newtown in a rather bizarre performance).

Unfortunately for the film, whilst it was fairly enjoyable during its run time, upon reflection I don't think I learned anything about the subject matter that I didn't already know; it just re-tells a story that was played out in the media every day for eight years.

There are stories in the legacy of the Bush government and there will probably be more, and I dare say, better films forthcoming. I found W. a disappointing misstep from the great director. Maybe it was just way too soon (the film was released theatrically while Bush was still in office), or the 'hook' for a film just wasn't in the direction they chose to take the film; either way we are left with a film that struggles to tell the viewer why exactly it is relevant.

W. is presented in the aspect ratio of 2.35:1, encoded in AVC compression.

For a film of such recent vintage, it's no real surprise that the film looks fantastic. Of particular note is the very sharp detail that permeates every frame. Pause over one featuring clothing or skin detail to see what I mean. Colour is reproduced nicely, from the bright red on the ever present American flag, to the deep blacks of a suit. I certainly didn't see any compression artifacts and there was a nice amount of fine film grain, whose presence indicates no DNR was used to scrub the transfer.

The main audio track is encoded in DTS HD Master Audio 7.1, at 24 bits.

For a talky drama such as this, the inclusion of a 7.1 audio track is no doubt a little overkill. Still, a nice soundstage is created which helps sell the viewer into the film, even if there is little to show off. I heard no distracting issues throughout and importantly there were no dialogue issues to speak of. The score by Paul Cantenon is mixed well into the main soundstage and the surrounds, but is hardly memorable.

Overall, a good effort, but hardly necessitating a 7.1 audio mix.

First up, we have the ever dependable Oliver Stone Audio Commentary. I've really enjoyed past commentaries by the man, but I couldn't really get into this. Maybe it was because of my feelings of the film itself, or it could just be that I was over hearing about it. Either way, you are going to have to be a pretty hardcore fan of the film to get through this.

Two short featurettes are up next, Dangerous Dynasty: The Bush Legacy, is a fairly unrestrained political broad swipe of the Bush presidency. This is how I imagined the film would be walking into it, but strangely wasn't. The next; No Stranger to Controversy: Oliver Stone's W. is more of a straight making of featurette. Interesting is Josh Brolin's initial reticence to join the film, but how Stone's perseverance won him over.

A text based feature entitled Filmmakers Research and Annotation Guide is a massive collection of on screen text which Stone has assembled to essentially cover his butt regarding some of the conclusions he's reached in the film. Stone did the same type of thing in book form for JFK and Nixon (both of which are fantastic and I own, thankyou eBay), but I highly doubt that these would have sold that fantastically.

Finally, we have a bunch of Deleted Scenes. The majority don't really have a place in the film and whilst I enjoyed the last one, it would have been fairly ill-fitting during the film and served to extend the fantasy sequences just that one step too far. 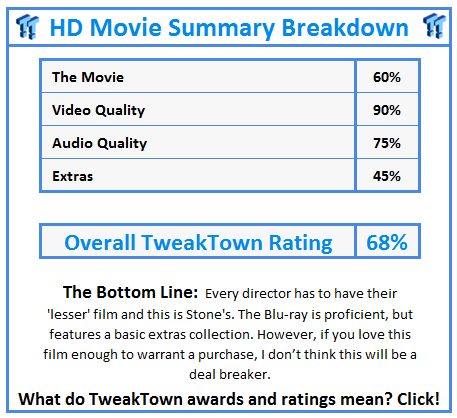