When Katie Cox (Tilda Swinton) decides to leave her CIA operative husband Osbourne Cox (John Malkovich), under instruction from her lawyer, she burns a CD of documentation, which she accidentally leaves at her local gym. As it turns out, Cox's incomplete memoirs are on the disc, but to an outsider these could be, and are, mistaken for secret government information. After gym junkies Linda Litzke (Francis McDormand) and Chad Feldheimer (Brad Pitt) come across the disc, they decide to blackmail Cox for the disc, which leads to hilarious and deadly results.

Burn After Reading is presented in the widescreen aspect ratio of 1.78:1, encoded with AVC MPEG-4 compression.

For a recent film, the film looks as good as to be expected. Whilst there is little in the visual style of the film to call attention to itself unduly, the transfer does a fine job of working as a naturalistic image. Colours are nice and defined and the transfer is pin sharp. I noticed no obvious film artifacts or encoding errors. The transfer is also free of nasty DNR.

Overall, a pleasing effort from Universal and true to the theatrical presentation.

The main audio track is encoded in DTS HD Master Audio, at 24 bits.

As a comedy, the soundstage is fairly front centric. I detected no problems with audio sync. Whilst the subject matter doesn't call for a bombastic audio presentation, at the same time more work could have been done to draw listeners into the world. Too often there is a total lack of ambience to outdoor scenes and even the score mostly fails to hit the rear speakers.

Overall, not a bad effort, the only thing holding back the score for this section lies with the original audio mix.

The Coen Brothers films generally don't come with generous supplements and unfortunately Burn After Reading is no exception.

Three featurettes make up the package: Finding The Burn is a five minute, made for TV commercial, with brief interview snippets interspersed with trailer footage. DC Insiders is a ten minute collation of interviews with the main players, but its lack of run time means that comments barely scratch the surface, Welcome Back, George is a really a brief rundown of the Coen Brothers recurring relationship with George Clooney.

Disappointingly missing is the original theatrical trailer, which was fairly quirky and seemed to be modeled on trailers produced for Stanly Kubrick films and was responsible piquing my interest in the film. 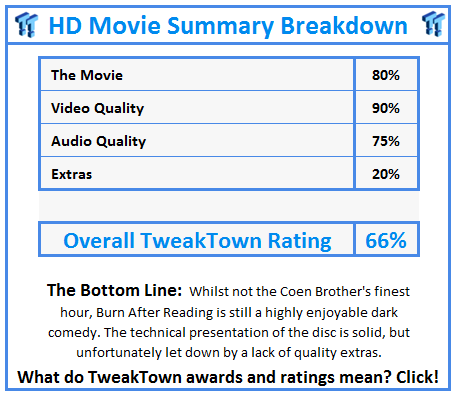