The crew of the Enterprise is summoned to return to Earth to face the consequences for commandeering their ship and returning to the restricted Genesis planet, let alone destroying the ship in the process. Meanwhile, Earth finds itself under attack by a mysterious entity who intends to communicate with the now extinct Humpback whale. If no response is returned, Earth will be destroyed. Unfortunately, in the 23rd century the whale is extinct. Captain Kirk (William Shatner) embarks on a scheme to return to Earth, circa 1986, to ensure the survival of not only the whales, but our own future.

Leonard Nimoy, who directed the previous entry The Search for Spock returns to helm this film. Many Star Trek fans cite this as their second favourite entry in the franchise, with a self reverential tone and just a little self mocking. The mid 1980's setting has aged the film slightly, but it's all in good fun.

Star Trek: The Voyage Home is presented in the widescreen aspect ratio of 2.35:1, encoded with the AVC codec.

In the wake of fantastic video transfers for the first three Star Trek films, unfortunately the standard has dropped considerably for this entry. Quite likely this is the same old transfer as created for the previous DVD release five years ago. The transfer is very 'jaggly', with a very artificial video look, a far cry from the very filmic look of the previous entries. Even worse, Paramount has applied quite an aggressive amount of DNR (digital noise reduction) in an attempt to smoothen out the image. However, this has also robbed the film of some fine detail, in many instances causing characters faces to resemble wax models. To compound the issue, a high degree of sharpening has been applied to the image, which gives objects a hardened and wholly artificial edge.

There are things to applaud with the transfer, it's more detailed than any transfer we have seen before, colour balance is quite accurate and film artifacts are lessened, but overall it's hard to forgive this one, especially so in light of the high quality and care extended to the predecessors. Maybe Paramount ran out of money or time, or both, but to really shine Star Trek: The Voyage Home needs a full remaster, in the vein of the one afforded to Star Trek: The Wrath of Khan.

Whilst it's the best we have seen Star Trek: The Voyage Home, the high standard has dropped considerably. Very disappointing,

The audio transfer is a far more consistent experience than the video transfer; the quality of previous discs has thankfully been retained here. I noticed no problems with audio sync and dialogue was fine for the most part. Surround usage is a little inconsistent; general ambience is a tad lacking, but the surrounds spring into life during some of the numerous action sequences. The subwoofer receives sufficient attention when called upon.

A much more pleasing effort and more in keeping with the quality set by the predecessors.

The first of the two Audio commentaries are provided by Director/ actor Leonard Nimoy and actor William Shatner which is bought over from the previous DVD release. The combination of Nimoy and Shatner is fantastic. Their friendship is evident and they play off each other well. The second commentary is a new track, featuring Roberto Orci and Alex Kurtzman. Whilst both had no involvement with this film, they wrote the newest Star Trek film. They speak fondly of the film and what it ultimately meant for the careers.

Next up we have a nice collection of newly produced Featurettes: Pavel Chekov's Screen Moments, a recent interview with Wakter KoenigThe Three Picture Saga which looks at how the franchise kick started off with The Wrath of Khan and continued to progress through the next two films. Star Trek for a Cause features an interview with a Greenpeace representative and how Star Trek popularized what was then an emerging cause and finally 'Starfleet Academy: The Whale Probe, a continuation of the info-mercial series.

Continuing the featurette collection are a few relics from the previous DVD release; Future's Past which serves as the main making of with many cast and crew recollections, On Location looks at the filming of the 1986 San Francisco scenes, Dailies Deconstruction is a split scene showing multiple camera angles of the San Francisco filming, Below the line: Sound Design takes a look at the creation of the organic sound effects, The Language of Whales is a very brief featurette on whales, A Vulcan Primer takes at the Vulcan species, looking specifically at the character of Spock, Kirk's Women takes a look at Captain Kirks love interests through the years, with recent cast interview of said interests, Time Travel: The Art of the Possible is a scholarly discussion on the possibilities of travelling through time, which is apparently possible through Einstein's theory of gravity. Intriguing. Next up is two visual effects oriented featurettes; From Outer Space to the Ocean and The Bird of Prey which could have been edited as one coherent piece but is not. Finally, we have two featurettes; both presented as tributes to the late Gene Roddenberry and Mark Lenard. Tastefully produced and featuring interviews with Roddenberry's son, Eugene and the family of Mark Lenard, who played Spocks father, Sarek.


The Original Interviews archive rounds up a collection of on set interviews with William Shatner, Leonard Nimoy and DeForest Kelly. Whilst I love Shatner; he's a very funny and talented guy; his more recent interviews are much more humbled and he's found a nice place of humility and frankness. This interview from 1986 makes him come off as a massive douche bag.

Lastly, we have the original Theatrical Trailer, presented in HD. 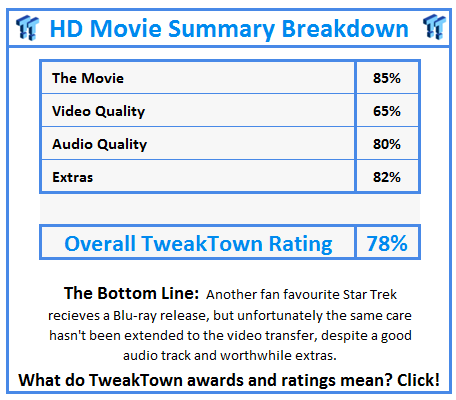