Death Race is set a few years into the future, where the economy has collapsed and the disillusioned populace have turned to the self titled sport, played by incarcerated felons, whom hope to gain their freedom by winning. With such a grand prize, it's no surprise that the sport is ultra violent in nature - there can only be one winner. The films' subplots are a little more involving than what the title suggested, but ultimately it is about the racing and what was captured on film is some rollicking stuff; very visceral and destructive. It's also very brutal in parts, so probably don't watch with the kiddies.

Death Race isn't art and I don't recall seeing it in any of the 2009 Academy Award categories, but I had a lot of fun with the film and as I stated at the outset, I was very surprised at how much I liked the film.

Death Race is presented in the widescreen scope aspect ratio of 2.35:1, encoded in MPEG-4 AVC compression.

For a film of such recent vintage, I expected the film to be free of film artifacts and other film nasties and again I wasn't disappointed. The transfer is pin sharp and vividly detailed. The cinematography is harsh and dirty and this transfer accurately represents this, with a lot of very fine detail.

I was very impressed with the video on show here. I really couldn't see anything to complain about.

If my expectations for the film itself were low, my expectations for the soundtrack were disproportionately high. Again, within minutes of the film, my hopes were justified. Home theater aficionadas will be very happy with this extremely aggressive and multi-layered audio track. A very dynamic track, I had to turn up the track ever so slightly to pick up some of the quieter dialogue scenes. There are some extremely low frequency bass effects to support the massive amount of crashes and explosions throughout.

Fans will be most pleased with this audio mix - reference quality all the way.

Director Paul W.S. Anderson and Jeremy Bolt contribute to the audio commentary and provide all manner of detail to the making of the film. Anderson speaks very eloquently and his manner is fairly interesting to listen to, but you will have to be a fairly big fan of the film to get through the whole thing.

Start Your Engines: Making a Death Race, is the fairly generic making of documentary, but had enough behind the scenes snippets and factoids to sustain interest. The other featurette, Behind the Wheel: Dissecting the Stunts is fairly obviously more focused on the stunts and explosions of the film, which is a little more exciting. It was extremely enjoyable to see how much of the films' special effects were done in-camera and it does help to sell the film for sure.

Create Your Own Race is essentially a multi-angle sequence of one of the more exciting parts of the film. Using BD-Live, you can also share your made scene over the net with fellow owners of the disc.

Typical of Universal Blu-ray, the disc features the U Control features, which intersperses making of segments throughout the film, essentially making the whole film a 'making of'. I really enjoy these features and like how this has become a staple of almost all Universal discs.

Tech Specs is a fairly useless BD-Java feature which overlays a graphic of information relating to Death Race drivers throughout the racing. 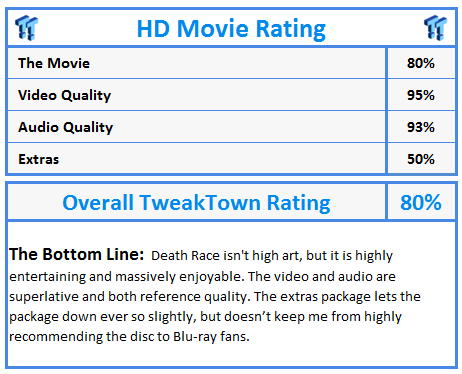