Up to 2,000 MB/s throughput via native USB, enough said.
Buy at Amazon

Compatibility continues to be the key obstacle when it comes to fast portable solid state storage. There is literally not one portable SSD that relies on a bridge chip to interface over USB that is universally compatible, meaning it just works as long as the host device has an available USB port. This is where the new generation of fast native USB portable SSDs are changing the game.

We could write a book on the subject of compatibility as it relates to the lack of it when it comes to external solid-state storage. It's probably the longest-running source of frustration we've had to suffer in the world of solid state storage. But finally, we are seeing truly speedy portable storage devices like the one we have on the bench today that are supremely compatible, even if all you have is a USB 2.0 port to work with.

Native USB is the key to universal compatibility. So far, we've reviewed the only two offerings we know of to this point, Kingston's XS2000 and the inland Platinum external SSD. The XS2000 being powered by Silicon Motion's SM2320 native USB chip, and the inland Platinum powered by Phison's new native USB SSD controller. Both delivered blazing throughput and compatibility so good that we couldn't find even one device that would not work perfectly with.

The ADATA SSD we have on the bench today is the third native USB SSD we've come across. ADATA's newly launched Elite SE880 is available at two capacity points, 500GB & 1TB. This super-compact portable interfaces through USB 3.2 Gen2 x2 Type-C at speeds of up to 2,000 MB/s. It's backward compatible with all USB versions going all the way back to USB 2.0. ADATA backs the Elite SE880 with a 5-year warranty.

This portable SSD is very much like the XS2000 in terms of its compact size and performance, which is a byproduct of both offerings being powered by Silicon Motion's SM2320 native USB SSD controller. In the world of USB storage, compatibility is king, and when you get that supreme compatibility along with up to 2,000 MB/s throughput, it is truly something special. 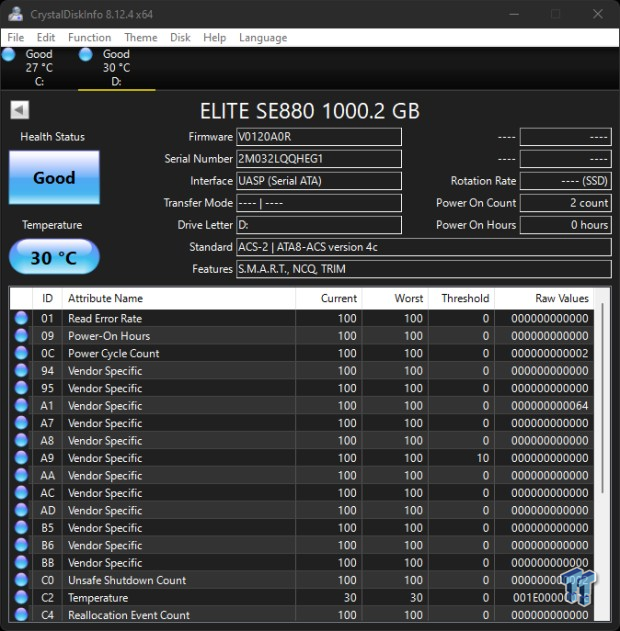 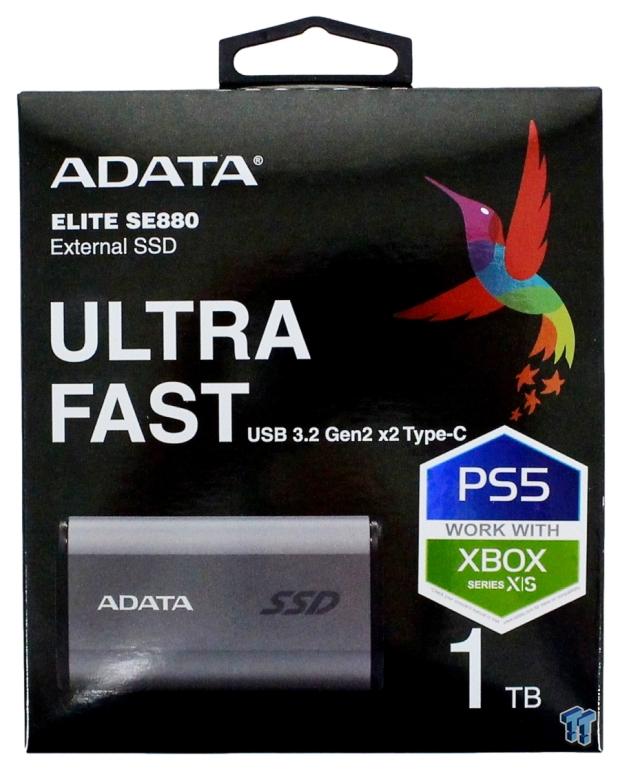 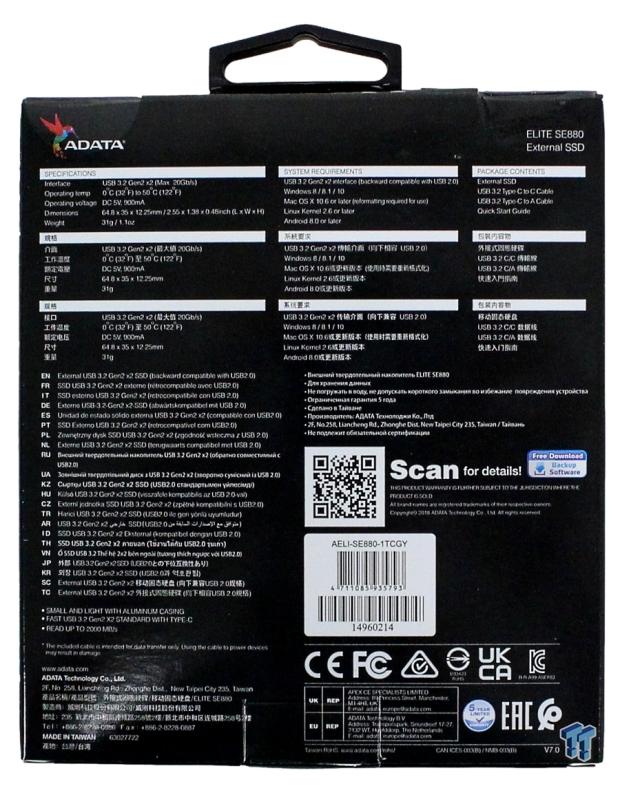 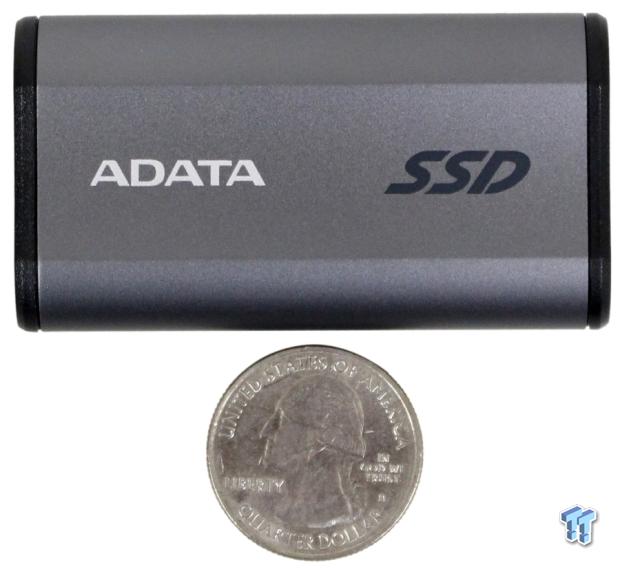 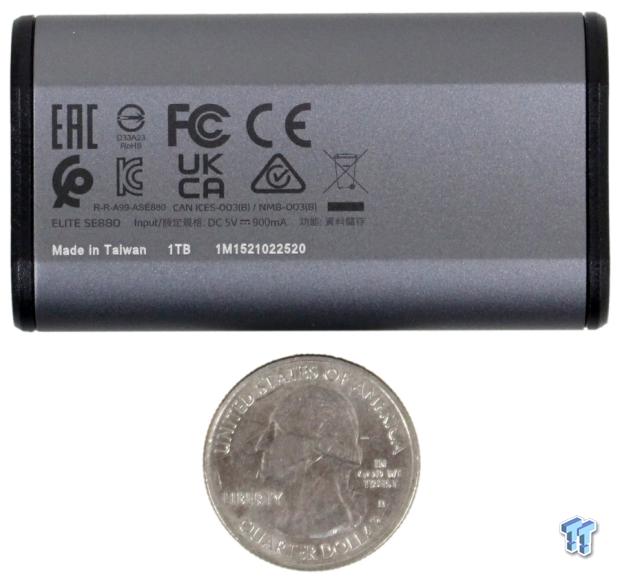 As you can tell by the quarter placed alongside it, this device is super-compact. Included with the drive is both a USB C to C cable and a USB C to A cable. 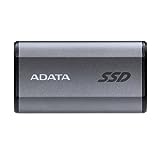 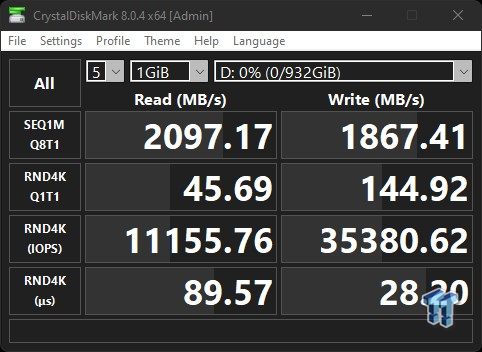 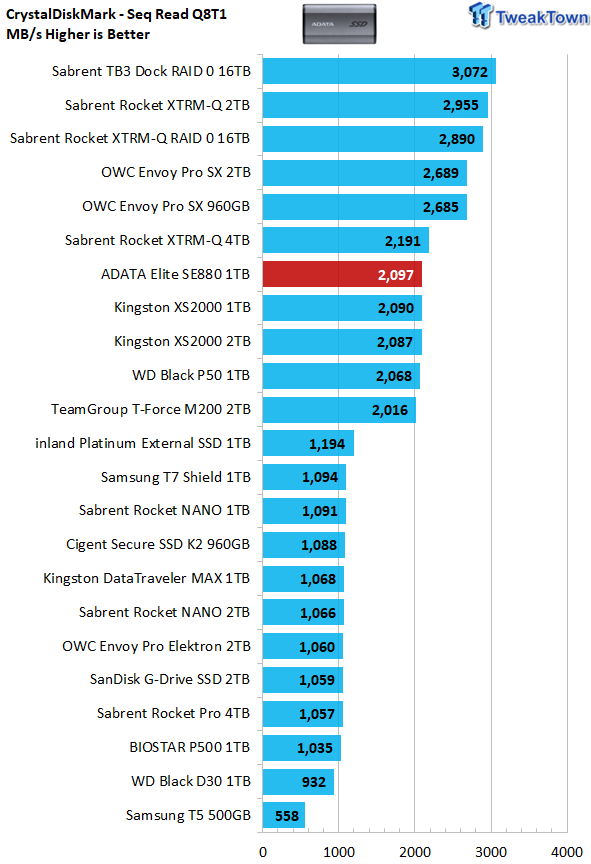 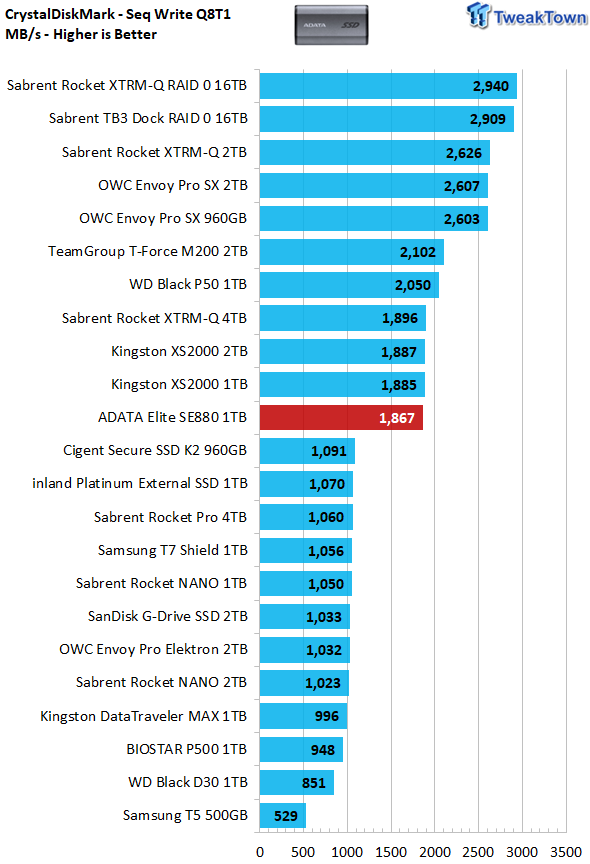 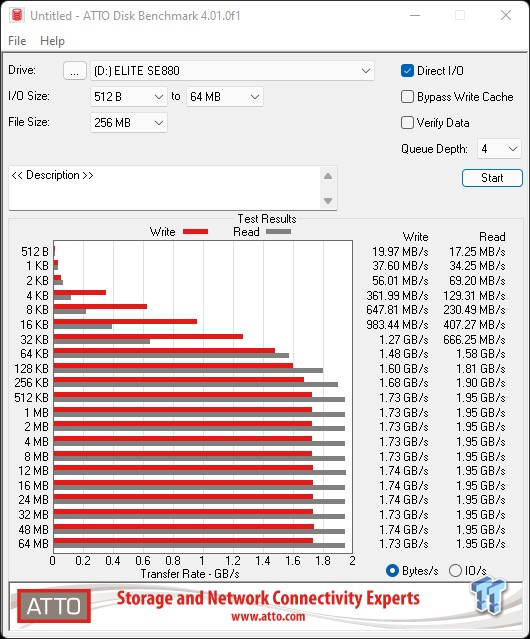 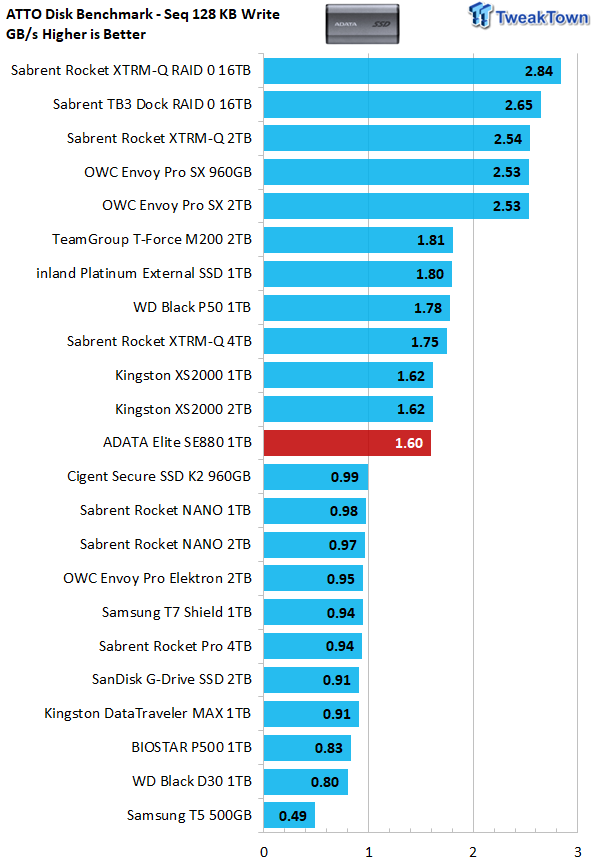 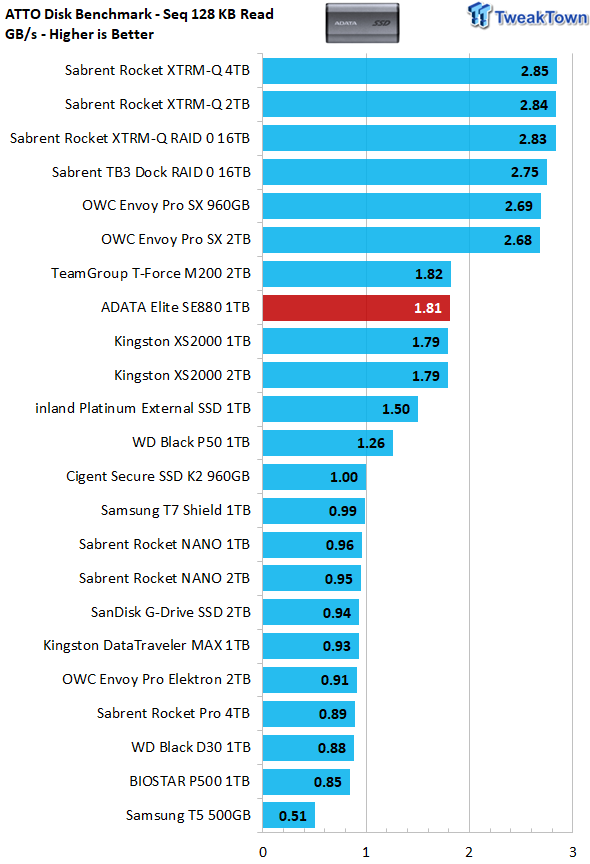 Nearly full performance at 128K transfers. Exactly what we like to see from any storage device. 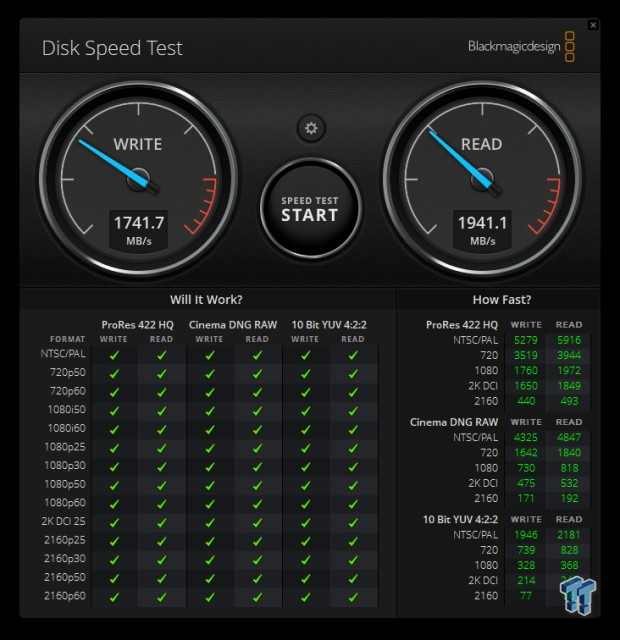 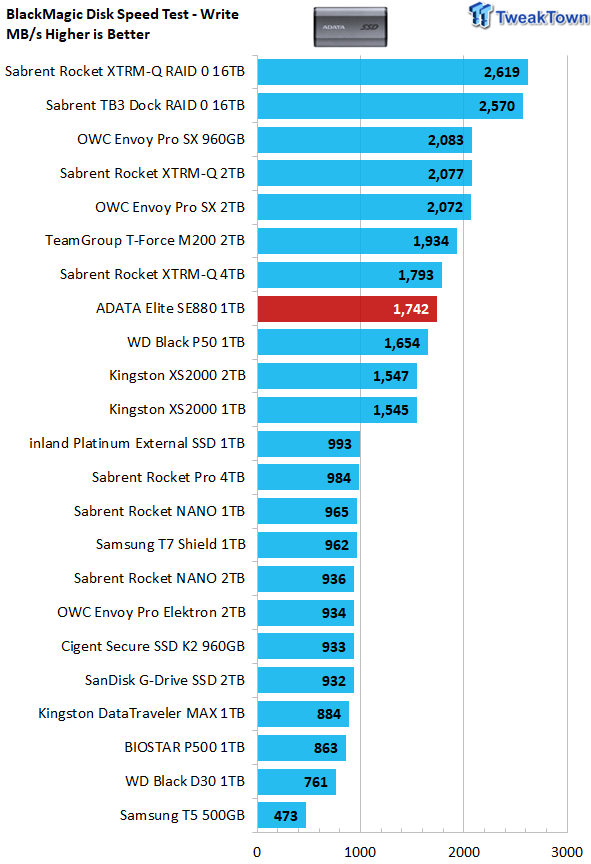 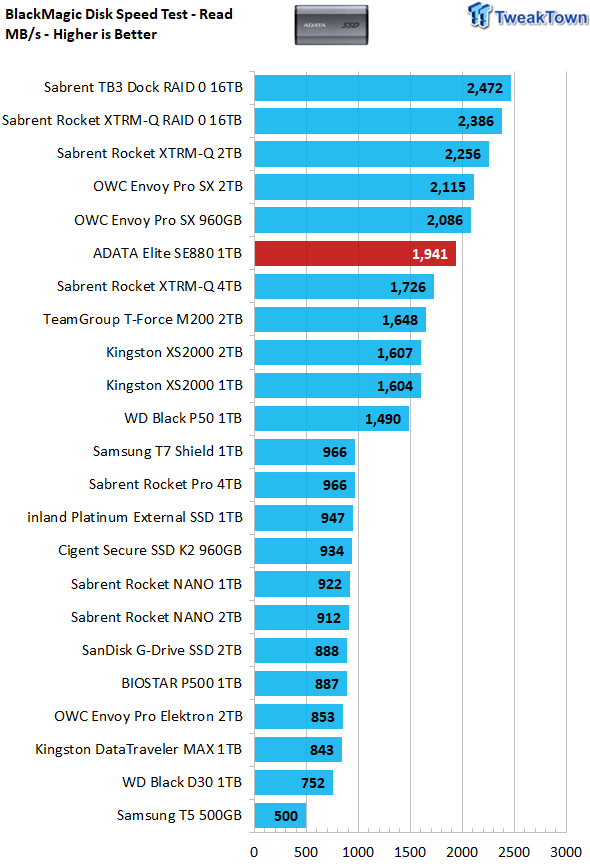 The Elite SE880 1TB show's itself to be capable of handling all video formats tested by Blackmagic's disk speed test. 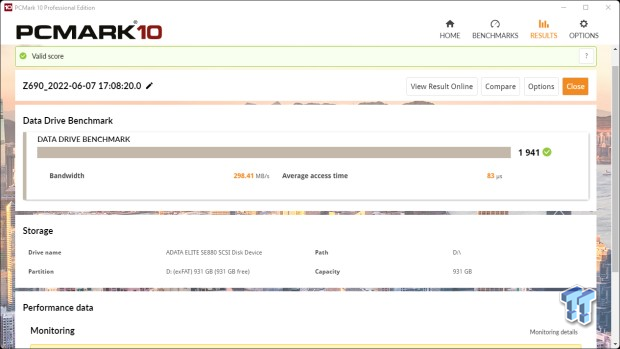 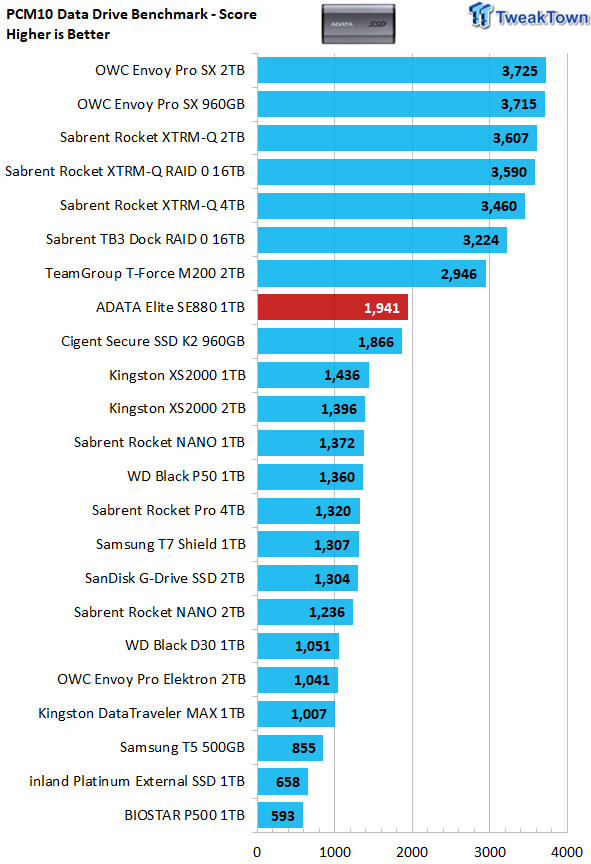 As our previous results indicate, the Elite SE880 1TB makes for an excellent extended data drive. In fact, it delivers the second-best performance we've seen to date for a USB interfaced SSD. Impressive. 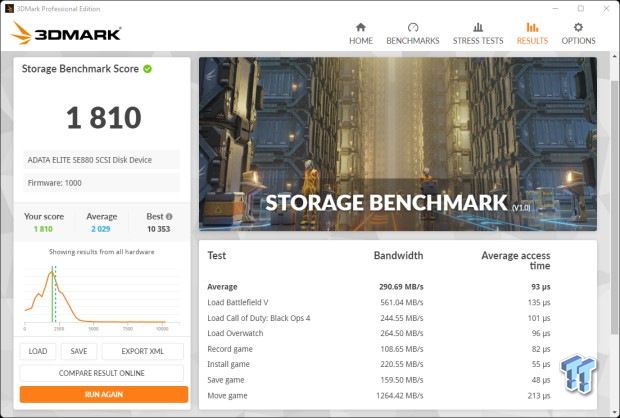 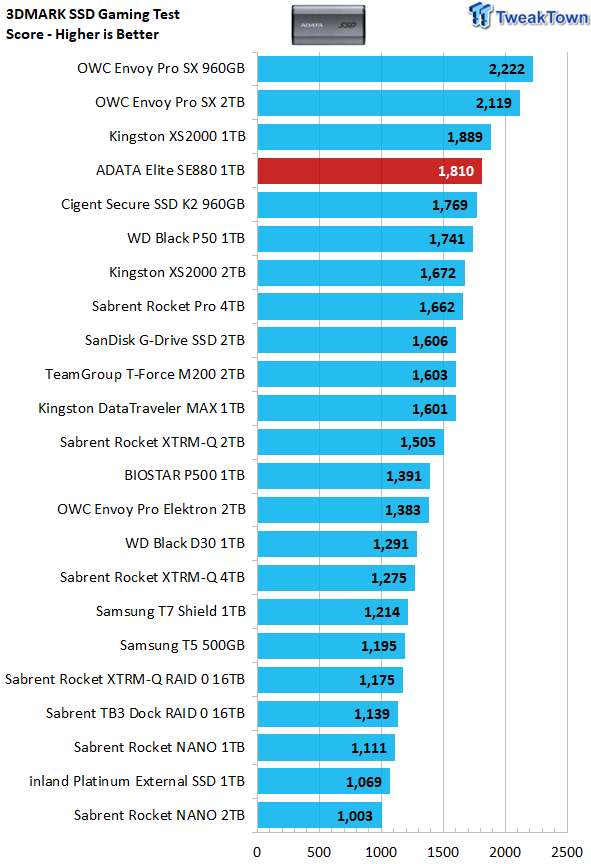 Gaming is a performance metric that matters to the majority of DIY consumers, especially to the enthusiast crowd that TweakTown caters to. We are now including gaming performance as a part of our external SSD reviews as using portable storage for gaming duties is very popular among avid gamers.

If you want to use the Elite SE880 for a portable game drive, it will do an excellent job, and more importantly, it will just work provided it is compatibly formatted for the host device. 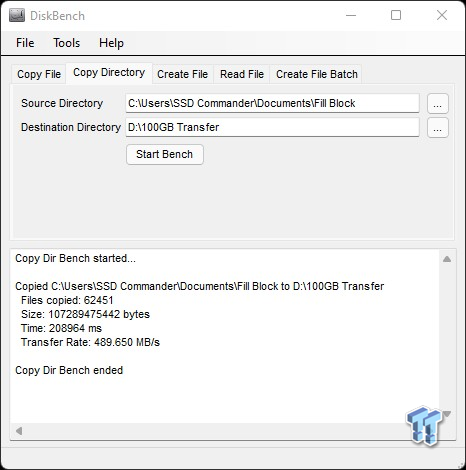 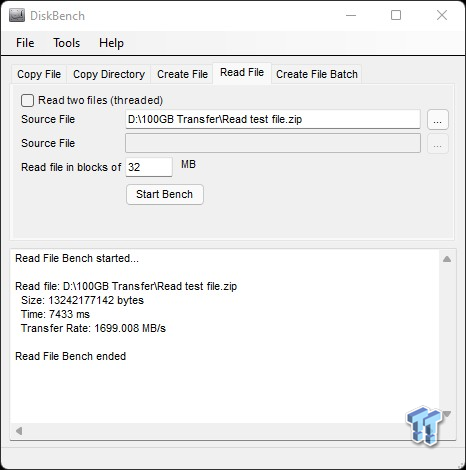 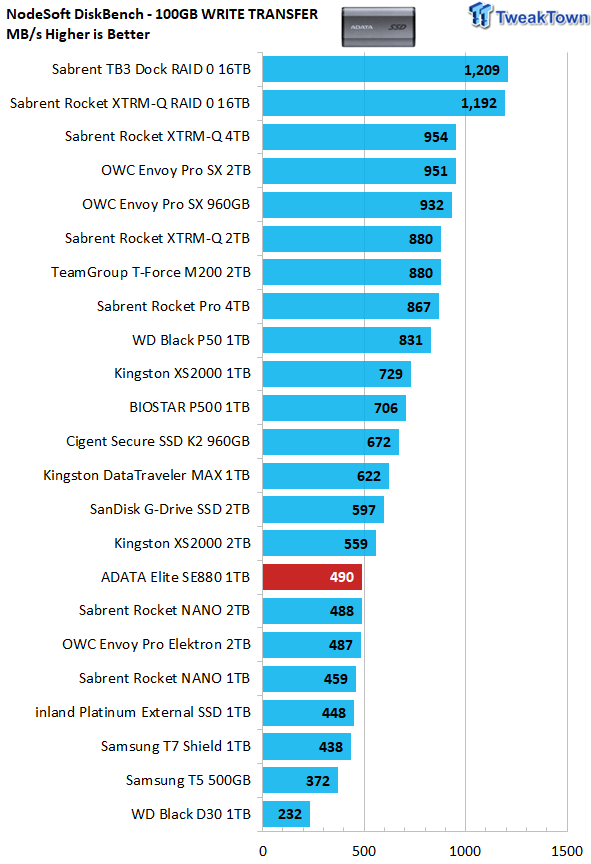 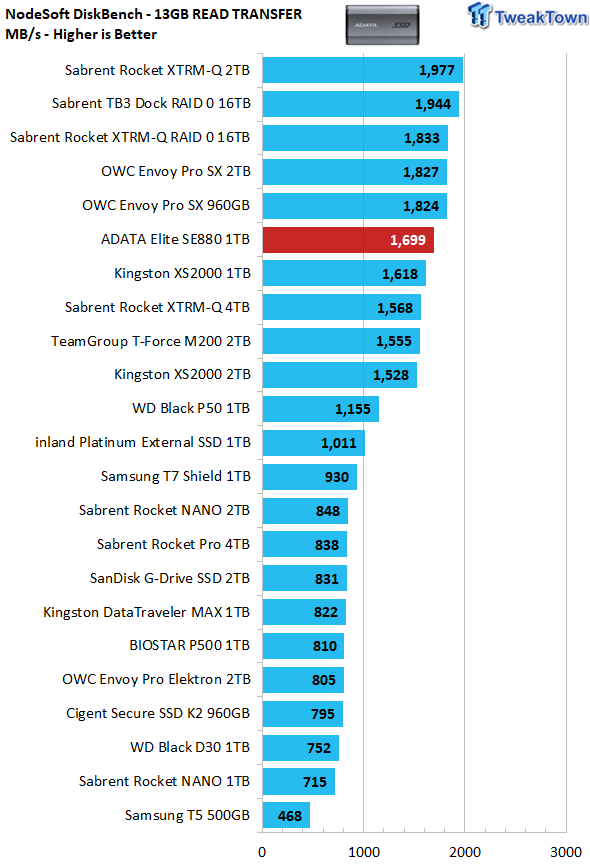 We brutalize our test subjects with our extremely hard-to-swallow 100GB data block. This data block is the same one we use for our internal SSD testing and is composed of more than 62K files. This is where the rubber meets the road for a portable SSD used for PC data storage (not video files). Keep in mind that the use case scenario for the PC consumer space is write infrequently, read frequently.

As such, we don't care that much about write performance as long as it is still reasonable, say 350 MB/s or better. What we do care about absolutely is how fast the drive can serve data to the host (read).

At around 500 MB/s, real-world write performance is plenty good enough for our liking. Real-world read performance is stellar. In fact, it's the highest we've ever extracted from a USB interfaced device. Wow.

In the world of portable storage, compatibility is king, and only native USB interfaced devices are fully compatible, period - end of story. Everything else is literally a crap shoot of cabling combinations, bridge chips, host chips, and power delivery. And USB 2.0? Forget about it.

Aside from its superior compatibility, we are impressed with the drive's amazing read throughput. Overall, its read throughput is the best we've seen to date for a USB interfaced SSD, making it a superior choice for employment as a portable data drive or a portable gaming drive.

Finally, the ADATA Elite SE880 is an impressively compact storage device. With a volume of just 28 cc, the SE880 is even smaller than Airpod cases and can be easily held in the palm of the hand. Its compact size is incredibly convenient for busy people on the move. Best compatibility, best performance = our highest award. 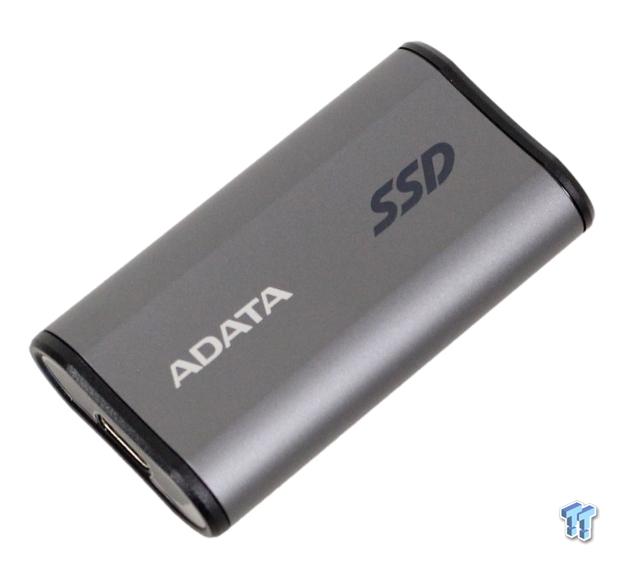