Supermicro is known for its servers and workstations, but they have recently broken into the gaming market with a full line of platforms under the SuperO branding. That said, up to this point, we have yet to see a Z690 motherboard be deployed from SuperO, but they did just launch their X13 lineup of workstation solutions, so today, we have the X13SAE in house for review. 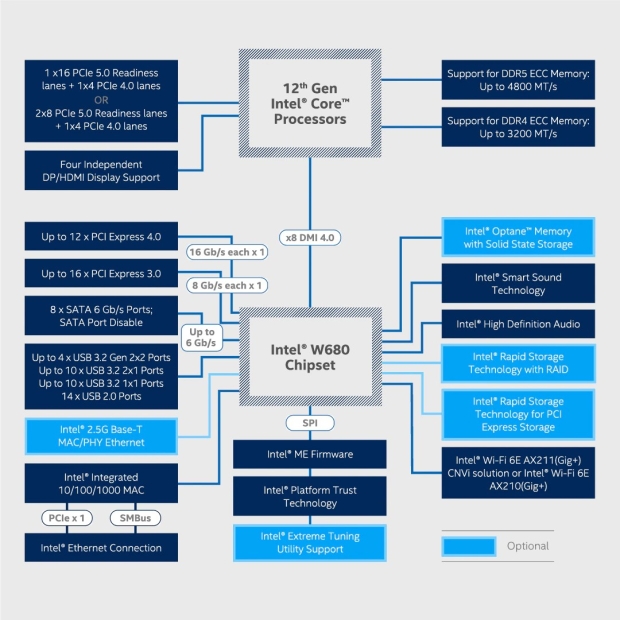 The X13SAE and its X13SAE-F counterpart are both Supermicro platforms built on the Intel W680 chipset. W680, on the surface, is comparable to Z690 with support for the same PCIe technologies, USB including 3.2 Gen2x2 and the 2.5Gbe/WiFi6e Network stack. Far and away, the largest difference is memory support, where W680 formally introduces Alder Lake to ECC support.

The Supermicro X13SAE is an LGA1700 platform built on the W680 chipset. Memory support is across four slots, with support speed at JEDEC 4800MHz either with or without ECC. Current 12th Gen Intel CPUs are supported up to 125w TDP, with expected support for the Xeon W 1400 series and possible E series later in the year.

Expansion is available via two PCIe x16 slots, both supporting Gen5 with bifurcation allowing x16 for single use or x8x8 if both slots are occupied. Additional slots include 2x PCIe x4 alongside a PCI slot.

Storage connectivity offers three Hyper M.2 slots that support Gen4 PCIe and eight SATA ports for legacy connectivity. USB support includes three Gen 2 ports on the rear of the unit, red in color alongside a Gen2x2 using the USB-C form factor. There are two additional USB 2.0 ports for KB/Mouse and many display outputs that include HDMI, DVI, and Display Port. Audio is passed over the ALC888 audio codec.

Current pricing for the Supermicro X13SAE is unknown, but we can guess based on listings at several retailers overseas. This would give us a market price of 424.3 Euro or roughly $460 for this platform. 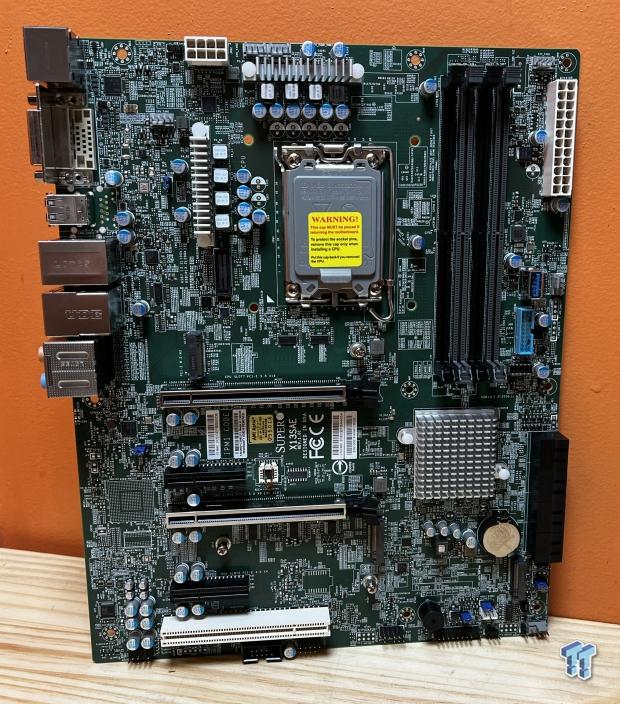 The X13SAE is a green PCB motherboard, typical of server and workstation platforms. The layout is standard, CPU socket centered at the top, RAM to the right, and 24pin/8pin power in their usual locations.

The three m2 slots live between the PCIe slots and the SATA ports on the right edge of the board. 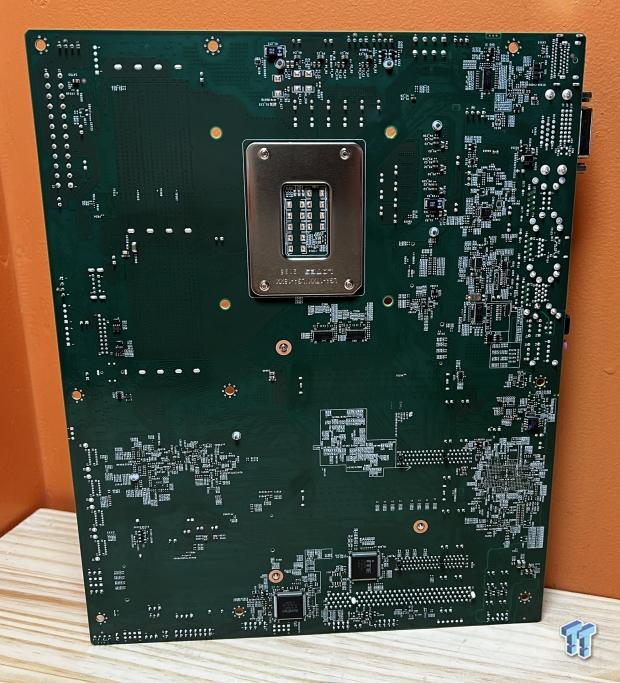 The back of the board is mostly blank apart from the support for the CPU socket retention.

Rear I/O includes HDMI and DP at the top, followed by DVI for legacy displays. We then move into USB with two USB 2.0 ports, three USB 3.2 Gen 2, and one Gen 2x2. At the bottom, we have the typical audio layout that includes optical output. 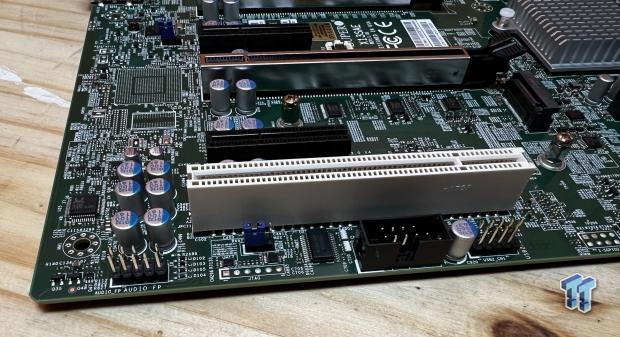 The bottom of the board includes front panel audio and a USB header. 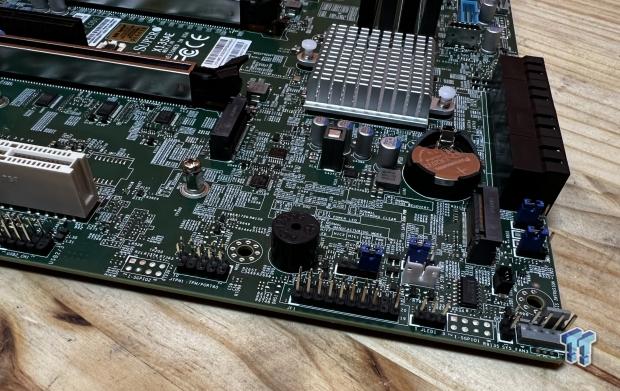 Further down the line, we have the TPM header, front panel chassis connections, and our first fan header.

Up the side of the board, we have eight SATA ports. 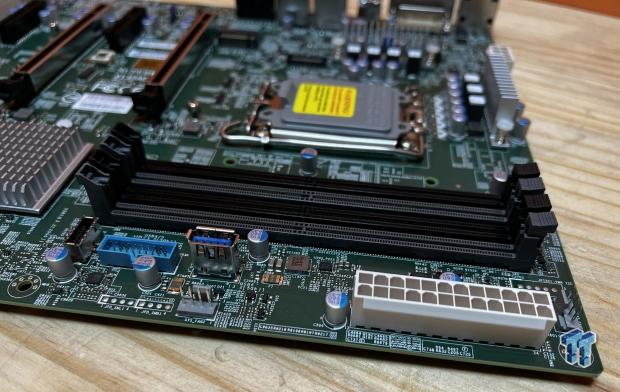 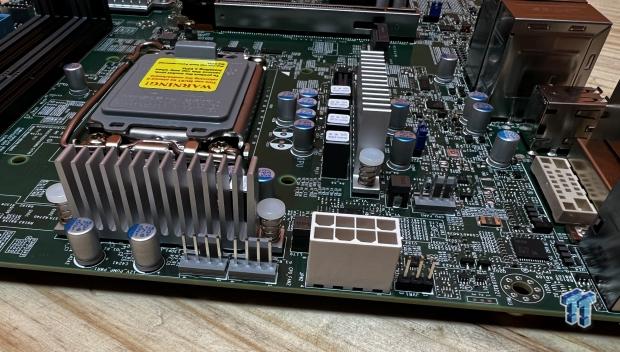 Across the top, we have several fan headers and single 8-pin CPU power input. 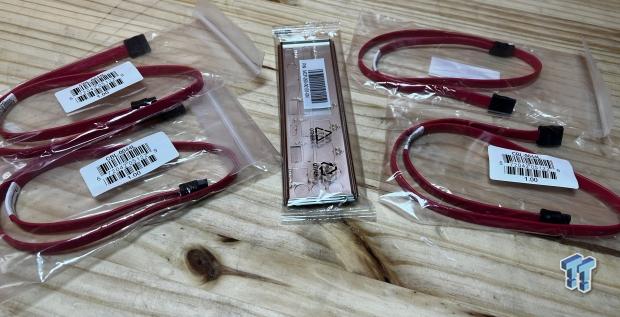 Our sample includes the rear I/O plate and SATA cables. 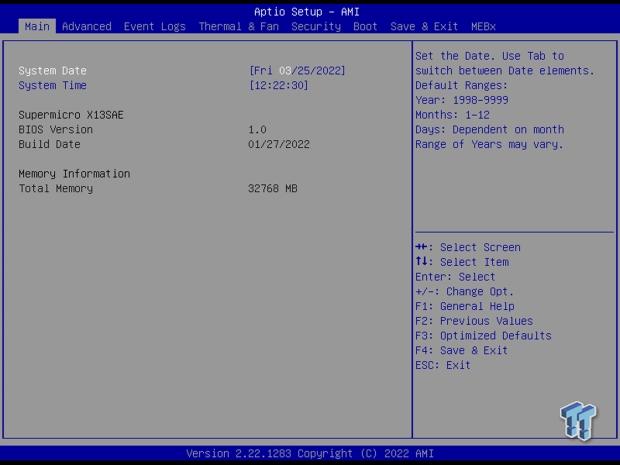 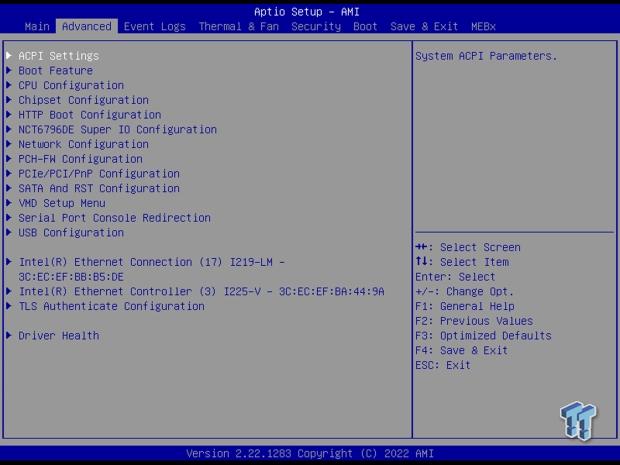 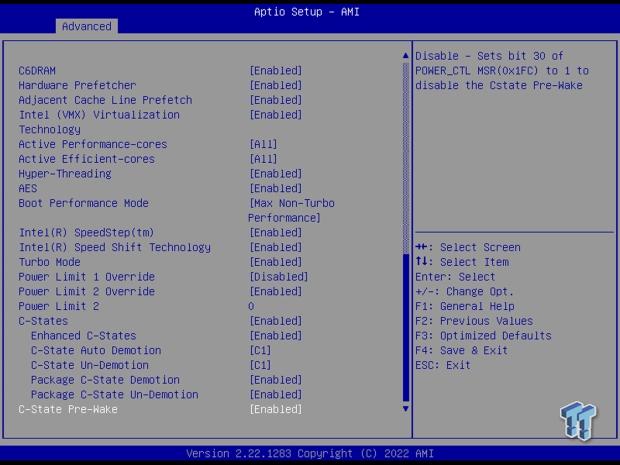 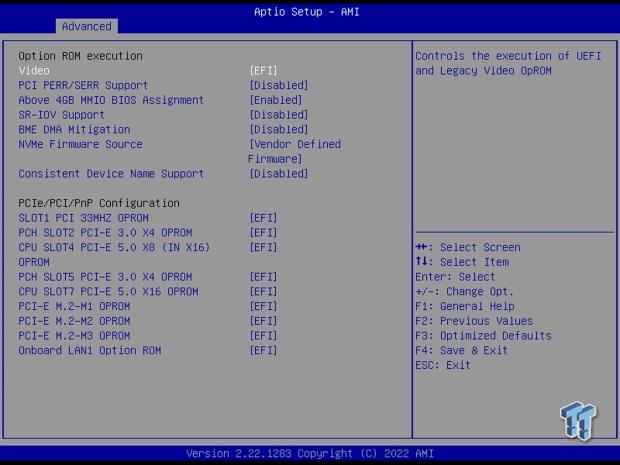 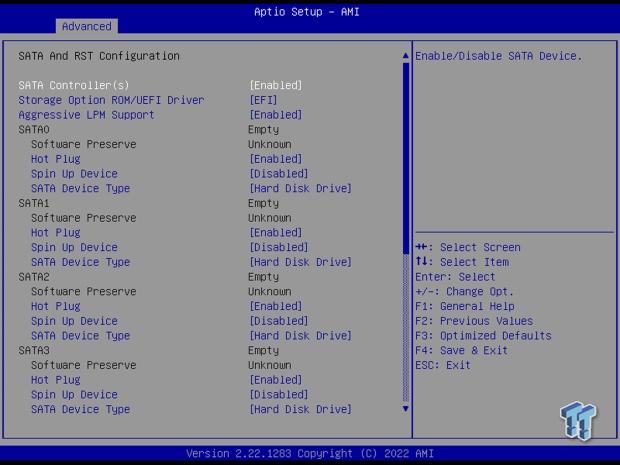 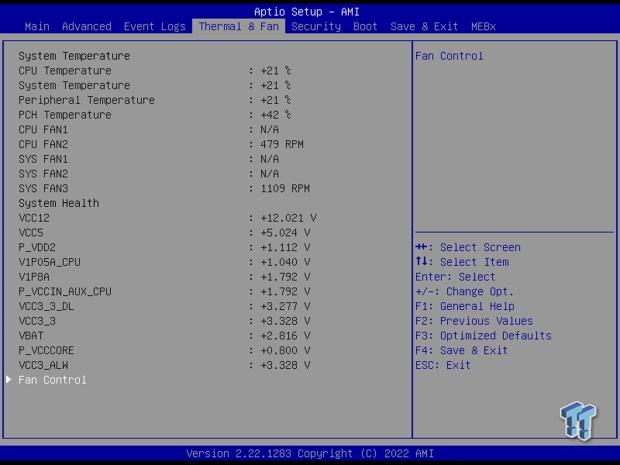 BIOS for the X13SAE is considered legacy by today's standards. Keyboard-friendly layout blue on grey scheme that includes several tabs at the top for navigation. The main menu offers time and date, the current build version, and installed memory.

The advanced menu will be where most options are configured. This includes boot features and CPU configuration and chipset, network, and PCIe/SATA storage configurations. Thermal includes temperatures and voltages listed for the board and components - fan tuning is available at the bottom of this menu. 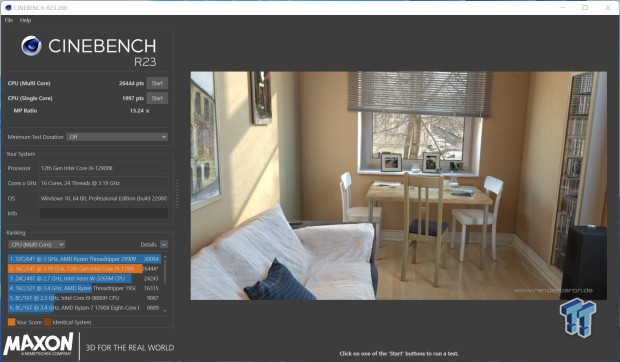 AIDA was recently updated to version 6.6, which improved performance in both AES and SHA3 workloads for Alder Lake CPUs. You will notice this performance jump in the charts below when compared to any previous Z690 reviews. 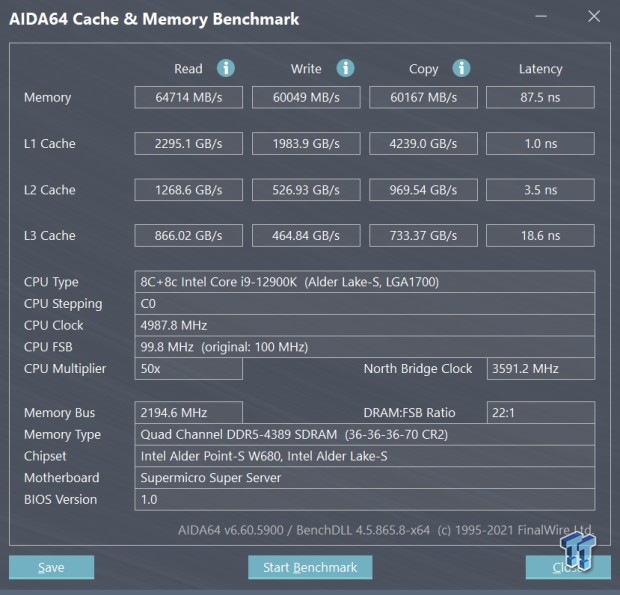 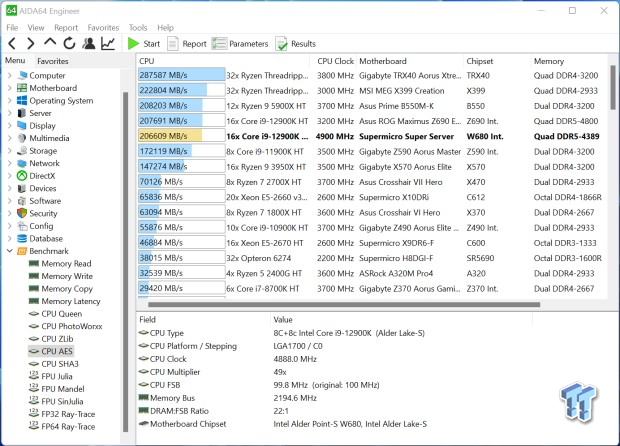 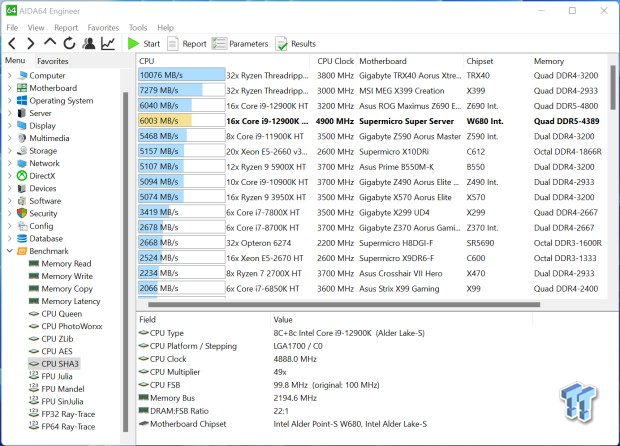 The Photo Editing benchmark uses Adobe® Lightroom® to import, process and modify a selection of images. In the second part of the test, multiple edits and layer effects are applied to a photograph in Adobe® Photoshop®. 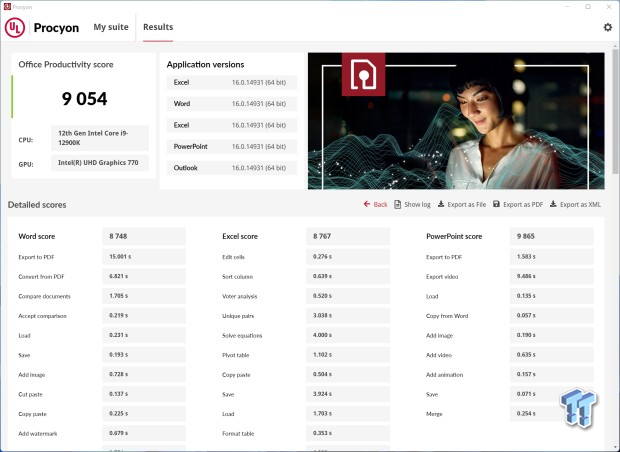 The X13 offered up 9054 points in the office productivity test. 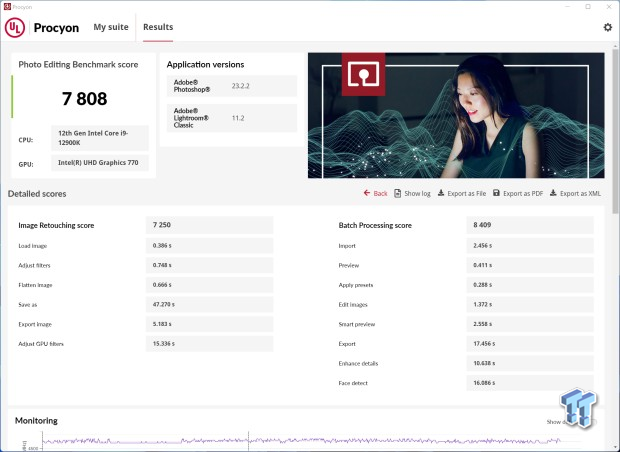 7808 for Photo editing in Procyon. 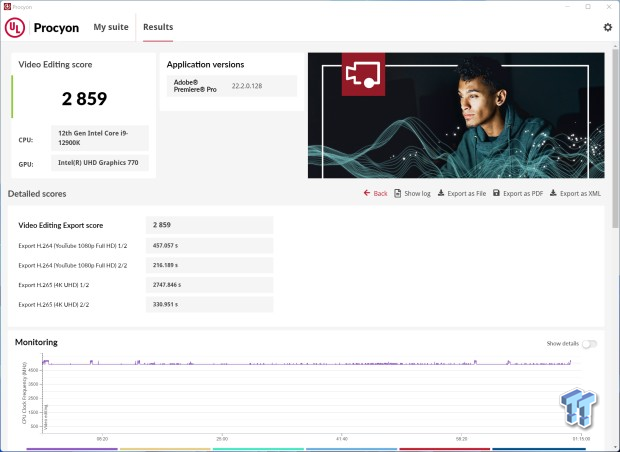 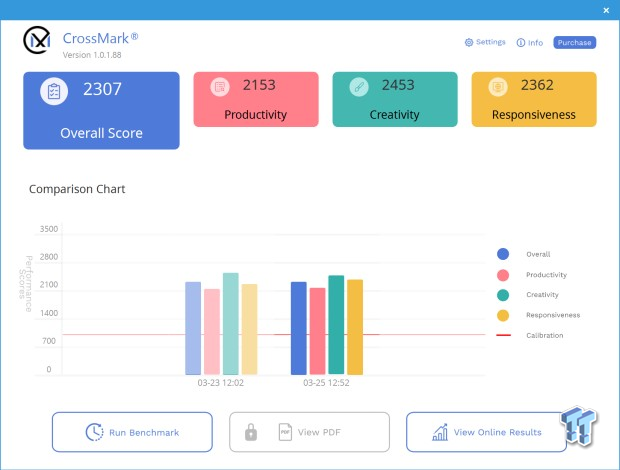 Crossmark turned a score of 2307, very similar to our Z690 testing. 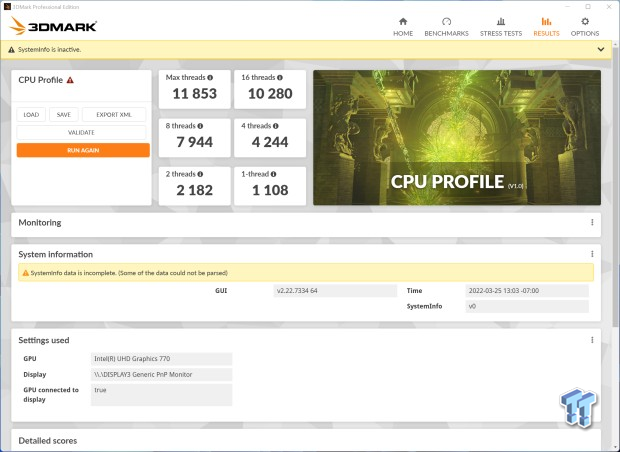 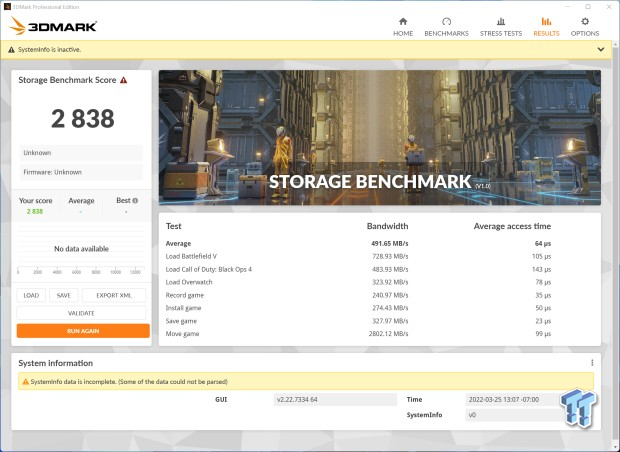 Consumers waiting to build their next workstation on Intel's W680 chipset shouldn't have much longer to wait as vendors like Supermicro and ASRock Industrial start to populate product pages with more and more information on these boards every day. The X13SAE is the current baseline package, a no-frills board that offers all the basics, including support for DDR5 and PCIe 5.0, USB 3.2 Gen 2x2, and 2.5Gbe for external connectivity.

In testing the X13SAE, we had no issues setting it up with our 12900K and basic kit of DDR5. Without XMP support, our 6000MHz kit of memory loaded up at 4400MHz at CL36. This gave us lower than normal performance in the benchmarks tested compared to our Z690 testing.

As a standalone platform, the X13 was quite good at keeping pace in R23 scoring 1997 single thread and just over 26K multi-thread. Our Procyon testing gave us real-world scenarios for Office, Photo, and Video editing. The X13 produced a score of 9054 in office, higher than both the Maximus Extreme and Aqua OC we recently reviewed.

As far as features are concerned, the X13 has most of what 12th Gen users are looking for, apart from WiFi6. It offers two slots of Gen5 capability and has a good amount of USB 3.2 ports both internally for chassis expansion and externally on the rear I/O. Most notably, I like the addition of the Gen2x2 over USB-C on the rear I/O and further dual LAN alongside multiple display options. As it stands, we are only guessing on the pricing, and at $460, the price is quite easily justified when we look at the hardware.

The X13SAE offers solid connectivity alongside all the standard features that are a part of Intel's 12th Gen Core and Xeon platforms.