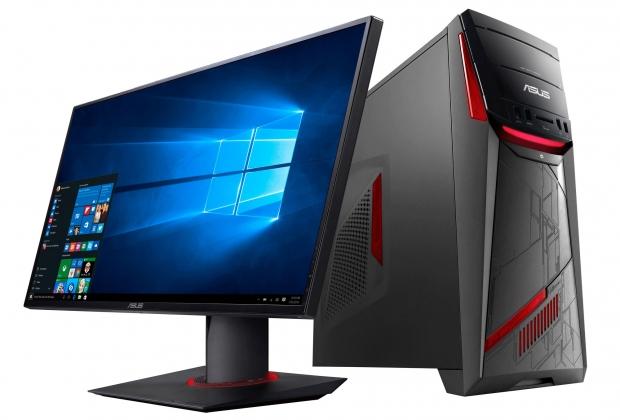 ASUS G11 features the latest 6th-generation Intel Core i7 processor to give users the performance to take on the most demanding of tasks, allowing them to play games at the highest quality settings, watch stutter-free 4K/UHD videos, or create websites and 3D models for work. The latest processor is 23% more powerful and 22% more energy-efficient than the previous generation.

The NVIDIA GeForce GTX 980 video card used in G11 delivers immersive 4K/UHD gaming visuals. It even enables HD gaming on up to three displays, with an option to add a fourth display via a HDMI connection.

The latest M.2 PCIe 3.0 x4 SSD provides data access speeds of up to 2 Gbit/s - four times faster than SATA SSDs - so the system boots up faster, apps load quicker, and in-game wait times are much shorter. DDR4 SDRAM provides speeds of up to 2.1 GT/s - twice that of DDR3 - for highly-stable performance. DDR4 is also more efficient than DDR3, requiring just 1.2V, so users enjoy up to 20% in energy savings. There's even 10 Gbit/s USB 3.1 Gen 2 for double the data transfer rates of USB 3.0.

ASUS G11 has a futuristic spacecraft-inspired design and features a menacing red and black color scheme, and Mayan-derived markings. The aggressive chassis design features three red 'flames' on its flanks, while a customizable 8-million-color LED effects panel dominates the front chassis face. The latter can be programmed to create ambient lighting that suits the game currently being played; or can be set to Pulse mode - where it emits a soft pulsing glow.

The exclusive Aegis II system performance monitoring enhances the user's gaming experience, and helps them track CPU/memory use, download and upload status, and gives warnings if the system exceeds temperature and voltage thresholds. GameAlive makes it easy to record and edit gameplay videos to share on social media; while Boost Launcher automatically frees up CPU and RAM resources to ensure smooth gameplay.

ASUS SonicMaster audio technology delivers incredible sound through a headset or speakers thanks to a unique mix of hardware and audio tuning software. ROG AudioWizard sound processing provides an additional layer of audio enhancement; with up to five customizable preset modes that can be easily accessed on-the-fly.