ASUS is the only motherboard manufacturer able to integrate diverse new technologies in tandem on its Z68-based motherboards on launch. These include the universal implementation of LucidLogix Virtu switchable graphics to harness the capabilities of Intel Quick Sync Video for faster video transcoding and the extreme performance of the latest NVIDIA and AMD graphics cards, along with Intel Smart Response Technology to accelerate hard drive performance and reduce energy consumption. 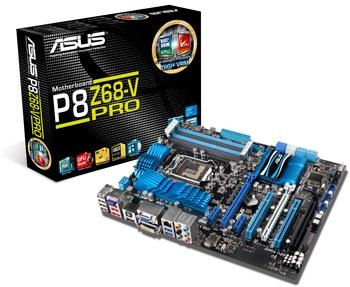 All ASUS Z68-based motherboards are natively designed to support the LucidLogix Virtu graphics virtualization engine that works in conjunction with Intel Quick Sync Video to deliver up to three times faster and smoother video transcoding and playback. This is achieved by instantly and seamlessly switching between integrated Sandy Bridge graphics and a discrete graphics card on demand. With uncompromising engineering quality, ASUS P8Z68 Series and ROG Maximus IV GENE-Z motherboards support both NVIDIA and AMD GPUs for the ultimate in flexibility as part of automatic graphics switching.

Following the successful and acclaimed ASUS P8P67 Series, new Z68-based motherboards from ASUS deliver a ramped-up range of proprietary technologies. DIGI+ VRM set a new standard for digital power control at its debut, where it replaced analog power control with the most precise tuning available to PC users. DIGI+ VRM also increases durability, reliability and overclocking potential, and leads to the most efficient power delivery among all available Z68-based motherboards.

ASUS also includes its exclusive UEFI BIOS on P8Z68 Series motherboards and the Maximus IV GENE-Z. An intuitive and easy to use graphical mouse-controlled BIOS, it incorporates the unique EZ Mode for fast and simple access to powerful system management and set-up. UEFI BIOS even offers drag and drop boot drive prioritization, simplifying a process that in the past presented a major hurdle to novice PC users. It includes support for hard drives with capacities greater than 2.2TB and provides extensive real-time system information for a more involved PC experience.