ROCCAT Studios proudly presents the ROCCAT Isku - Illuminated Gaming Keyboard featuring brand new ROCCAT Talk technology which will get its first global showing at CeBIT today. The ROCCAT Isku - Illuminated Gaming Keyboard is the result of intensive research and extensive design studies centered around meeting gamers' needs in particular. The result is a keyboard equipped with extensive macro functions plus, as a special set bonus, it's also the first keyboard in the world to feature the latest technologies: ROCCAT Talk and EasyShift[+]. The ROCCAT Talk protocol allows mouse and keyboard to talk to each other for the first time ever, opening up a host of unprecedented options for gamers. The 123 medium-height, standard-layout keys offer an optimum keystroke response and perfect pressure point. With 6 brightness levels, gamers can hit the right key even in the dark. 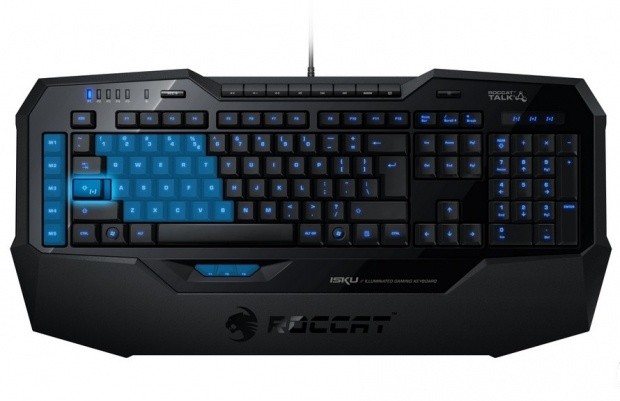 EASYSHIFT[+] GETS ITS KEYBOARD DEBUT
Patented EasyShift[+] technology that doubles the number of key functions now features for the first time on a keyboard. The ROCCAT Isku - Illuminated Gaming Keyboard features 3 EasyShift[+] Zones (M1-M5, 20 EasyZone keys, T1-T3). EasyShift[+] and the three thumbster keys offer a total of 36 macro functions all perfectly positioned in and around the WASD zone, making them very easy to reach. By default, the Caps Lock key which is of no interest to any gamer is configured as the EasyShift[+] key, but macro keys M1-M5 and thumbster keys T1-T3 can also be used. The 36 easy-to-reach macro keys offer a total of up to 180 directly executable functions which can be saved in 5 profiles. Thanks to advanced anti-ghosting, multiple keys can be depressed simultaneously. In addition, the 1000Hz polling rate ensures an ultra-fast keyboard response without any lag.

After installing the ROCCAT Talk driver the configuration options appear in the existing device driver. The gamer can decide whether to set one single key/button or two different keys/buttons to activate EasyShift[+] on the keyboard and mouse. The devices communicate lag-free for rapid in-game responses.

Brand new ROCCAT Talk technology allows even more effective use to be made of functions on the Kone[+] and all other ROCCAT Talk products. For the first time ever, the gamer can easily execute critical functions such as EasyAim by pressing a key on the keyboard. It's even possible to set the EasyShift[+] key/button to remain active until pressed again (toggle on/off).

ENHANCED MACRO LIVE! RECORDING
The integrated Macro Live! Recording button makes in-game macro recording straightforward. After pressing the Macro Live! Recording button, the new Sound Feedback feature guides the gamer through the macro recording process. Up to 500 actions per macro can be quickly and easily programmed to one of the 36 macro keys. It's even possible to edit recorded macros at any time using the Macro Manager.

The ROCCAT Isku - Illuminated Gaming Keyboard will be available from Q2 2011 for the MSRP of 79.99.