Qualcomm Incorporated (Nasdaq: QCOM) today announced that it is filing a complaint with the United States International Trade Commission (ITC) alleging that Apple has engaged in the unlawful importation and sale of iPhones that infringe one or more claims of six Qualcomm patents covering key technologies that enable important features and functions in iPhones. Qualcomm is requesting that the ITC institute an investigation into Apple's infringing imports and ultimately issue a Limited Exclusion Order (LEO) to bar importation of those iPhones and other products into the United States to stop Apple's unlawful and unfair use of Qualcomm's technology. The Company is seeking the LEO against iPhones that use cellular baseband processors other than those supplied by Qualcomm's affiliates. Additionally, Qualcomm is seeking a Cease and Desist Order barring further sales of infringing Apple products that have already been imported and to halt the marketing, advertising, demonstration, warehousing of inventory for distribution and use of those imported products in the United States. 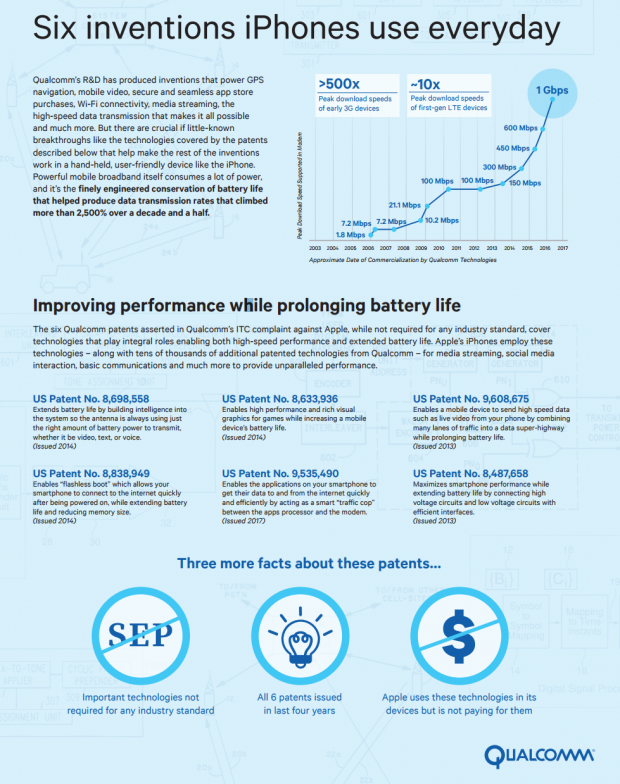 The six Qualcomm patents asserted in Qualcomm's ITC complaint against Apple, while not required for any industry standard, cover technologies that play integral roles enabling both high-speed performance and extended battery life.

"Qualcomm's inventions are at the heart of every iPhone and extend well beyond modem technologies or cellular standards," said Don Rosenberg, executive vice president and general counsel of Qualcomm.

"The patents we are asserting represent six important technologies, out of a portfolio of thousands, and each is vital to iPhone functions. Apple continues to use Qualcomm's technology while refusing to pay for it. These lawsuits seek to stop Apple's infringement of six of our patented technologies."

While the technologies covered by the patents are central to the performance of the iPhone, the six asserted patents are not essential to practice any standards in a mobile device or subject to a commitment to offer to license such patents.

Qualcomm today also filed a complaint against Apple in the U.S. District Court for the Southern District of California alleging that Apple infringes the same six patents in the complaint filed in the ITC. The complaint seeks damages and injunctive relief.

Qualcomm expects that the ITC investigation will commence in August and that the case will be tried next year.