All NewsBusiness, Financial & LegalCases, Cooling & PSUContests & GiveawaysCPU, APU & ChipsetsDealsDisplays & ProjectorsGamingMotherboardsScience, Space & RoboticsStorageVideo CardsVirtual & Augmented Reality
All ReviewsAll ArticlesAudio, Sound & SpeakersCases, Cooling & PSUCPUs, Chipsets & SoCsComputer SystemsDisplays & ProjectorsGamingMotherboardsNetworkingPeripheralsStorageVideo Cards
GuidesGamingAsk the ExpertsNewsletterAboutForums
RTX 4090Windows 11Halo InfiniteBattlefield 2042Elon MuskGTA 6RTX 3080HDMI 2.1
Storage
While it's taken quite a while to start seeing any form of significant decrease in the cost of owning a solid-state HDD, more so just recently we've begun to see them slide down towards the real world. One of the first signs of this came in the form of Super Talent's new MasterDrive MX SSDs, which had the top model (a 120GB variant) sitting at $699.

OCZ has now stepped in with the Core Series 2.5" SSDs which boast even more aggressive pricing with a 128GB model sitting at just $479. Other drives in the lineup include a 32GB model at $169 and 64GB at $259. Read below for OCZ's promised performance figures :- 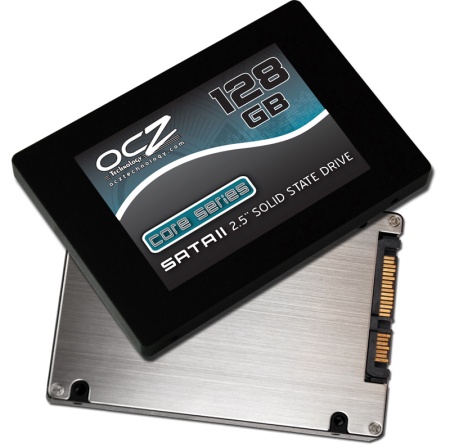 The OCZ Core Series delivers the performance and reliability of the latest SSDs at a 50% less price per gigabyte than other high speed offerings currently on the market. For the first time, OCZ is putting SSD technology within reach of the average consumer, and delivering on the promise of SSDs as an alternative to traditional hard drives in consumer targeted mobile applications.