It is based on Nvidia's high-end NForce 790i Ultra SLI chipset and uses a non-reference design which is a fresh change from all the other reference based boards from companies like XFX, EVGA and BFG. 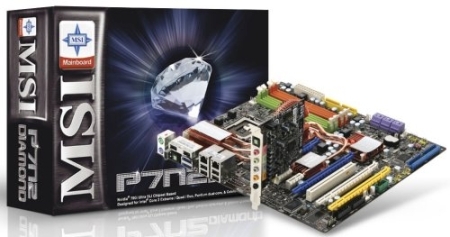 It supports an official FSB of 1600MHz quad-pumped and DDR3 memory up to 2000MHz with EPP. Its four PCI Express 2.0 x16 slots are capable of supporting up to three-way SLI using Nvidia's latest graphics cards such as the upcoming 9800 GTX.

As far as what MSI has done to the P7N2 Diamond, it sees Creative X-Fi Xtreme Audio via an add-on card. MSI's crazy rollercoaster Circu-Pipe heat pipe design has been slightly modified for better cooling performance, too. As you would expect it features more expensive Japanese solid capacitors and the PWM capacitors on this motherboard are based on "Hi-c CAP" which has better ripple current and dissipation factor characteristics.

We should have a full review of this motherboard next month.