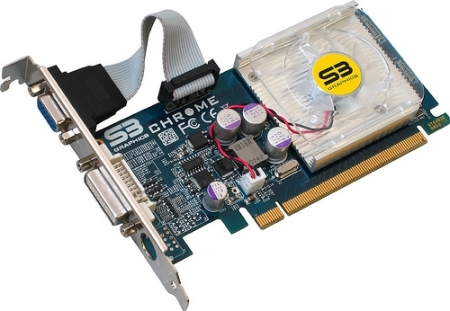 Before you get too excited, it won't contend with the latest bad boys from Nvidia and AMD but it does offer DX10.1 support at only $60 USD. It includes 256MB onboard DDR2 memory and using its ChromotionHD Video Technology it has hardware acceleration for H.264, MPEG-4, VC-1, WMV-HD and AVS at 1080p meaning it should playback Blu-ray movies just fine.

It has a core clock speed of 625MHz and its 256MB DDR2 memory works on a 64-bit memory bus at 500MHz. It works using a PCI Express Gen 2 x16 interface and its DVI port is HDCP compliant. It is just a mega shame it does not include a HDMI port as for just $60 USD, it would be a very attractive card for a new HTPC box. 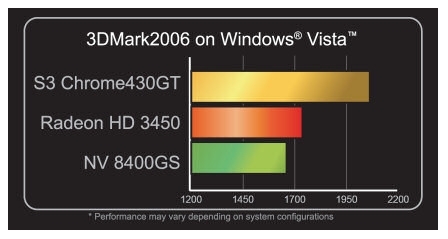 As far as performance goes and as you can see from the image above, S3 claim that it will beat AMD's Radeon HD 3450 and Nvidia GeForce 8400GS under 3DMark06 Vista by quite a margin.

We are trying to get a review sample in for testing to see how it performs! You can buy it here and learn more at its product page.