All NewsBusiness, Financial & LegalCases, Cooling & PSUContests & GiveawaysCPU, APU & ChipsetsDealsDisplays & ProjectorsGamingMotherboardsScience, Space, Health & RoboticsStorageVideo Cards & GPUsVirtual & Augmented Reality
All ReviewsAll ArticlesAudio, Sound & SpeakersCases, Cooling & PSUCPUs, Chipsets & SoCsComputer SystemsDisplays & ProjectorsGamingMotherboardsNetworkingPeripheralsRAMStorageVideo Cards & GPUs
GuidesGamingAsk the ExpertsNewsletterAboutPrivacyForums
AMD Zen 4Intel ArcBattlefield 2042RTX 3090 TiRTX 4090RTX 4080GTA 6Elon MuskHDMI 2.1
GIVEAWAY: TEAMGROUP T-Force VULCAN Z SATA III SLC 2TB SSD, two up for grabs!
CPUs, Chipsets & SoCs
Tech Report has been working together with AMD to compile a list of motherboards that support the AMD Phenom CPU. Tech Report suggests that AMD has neglected enthusiasts in the past, but now seems to be changing its tune. This current magnanimous gesture working with Tech Report is seen by many as a good sign for the AMD Company which has gone through a bit of a slump in recent months in terms of PR support for the enthusiast segment. 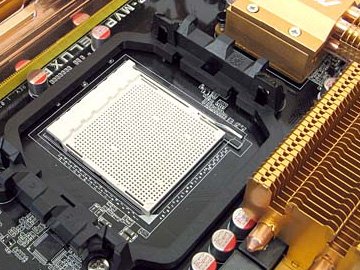 The tables they supply on their site indicate whether or not the motherboards can turn off the TLB erratum in the BIOS, and more importantly if the boards have Phenom compatibility or not.

Apparently some makers are confident that their boards have the capability, but only a few have been tested by AMD directly. These differences are also listed on the tables which can be found here.

The table itself is an invaluable tool for any prospective Phenom purchasers and should influence many decisions as to which motherboard to get to go with the super cheap AMD Phenom quad-core processor.
Newsletter Subscription