SpaceX is making progress toward the first orbital launch of its Starship launch vehicle, as the company recently conducted a successful static fire test. 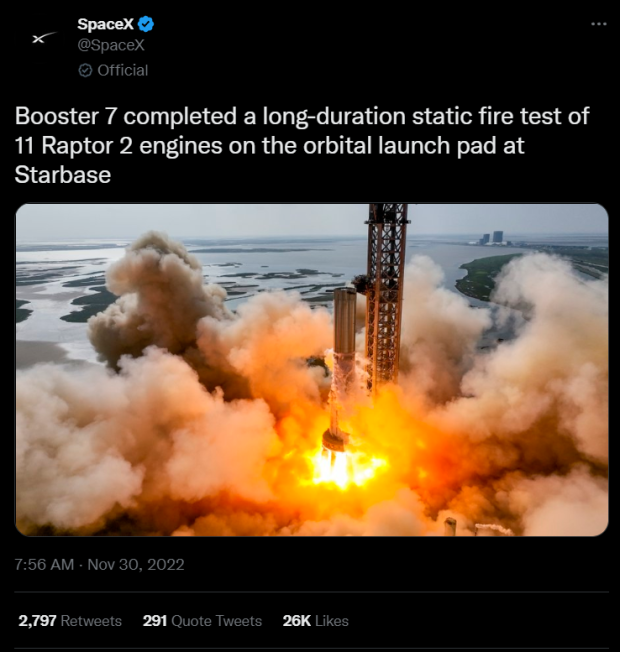 SpaceX took to its Twitter account to announce that Booster 7 has completed a long-duration static fire test that featured eleven Raptor 2 engines. The static fire test was successful and a step forward in SpaceX's journey to getting Starship to orbit, and it may very well be the second to last static fire test the company conducts before the orbital test launch.

SpaceX started the test at 2:42 pm on November 30, blasting 11 Raptor 2 engines for just 13 seconds. This latest test featured fewer Raptor 2 engines than SpaceX's previous static fire test on November 14, which featured 14 Raptor 2 engines. Notably, Booster 7 has a total of 33 Raptor 2 engines, which SpaceX is yet to test all at once. Presumably, Elon Musk's company will test all 33 of the next-generation engines before attempting the first orbital test flight for Starship. 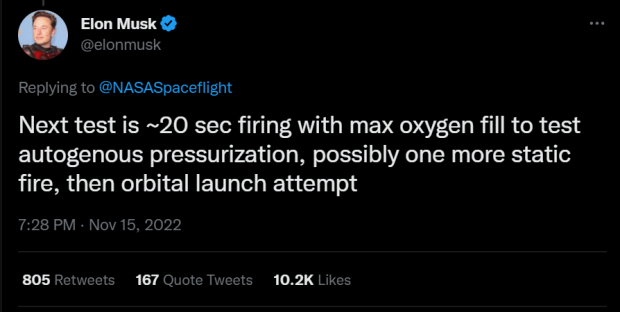 SpaceX CEO Elon Musk wrote on Twitter on November 15 that Starship would undergo one to two more tests before the company attempts Starship's orbital launch. The SpaceX CEO wrote on Twitter that the next test would be firing the engines for approximately 20 seconds, and as previously stated, the test that occurred on November 30, the Raptor 2 engines fired for only 13 seconds.

It should be noted that Starship's orbital launch attempt has suffered numerous delays and postponing, so it would be wise to take assume that there's a chance the launch will be delayed further into next year. With that being said, static fire tests are typically the last in the process of testing before a rocket takes flight. The timeframe between the static fire test and the actual launch attempt for Starship is officially unknown, but SpaceX is undoubtedly inching closer and closer.

It was only last month that SpaceX released a video of its chopsticks stacking its next-generation rocket, Starship. The video showcases the massive size of SpaceX's launch and catch tower at Starbase. If you are interested in checking out that video or would like to learn more about Starship, check out the above and below links.