Neuralink announced at its event in California on Wednesday that it's preparing to implant its brain chip into human patients.

Skip to 16:47 for the start of the presentation

Neuralink, the Elon Musk-founded brain-computer interface company, recently conducted a "show and tell" event this past Wednesday where the company gave an update on its status and its plans for the future. Musk appeared on stage to present the overall summary of the event, giving the goal of the product, what Neuralink wants to solve in the future, and where it expects to be within the next six months.

According to Musk, who wrote on Twitter, Neuralink has reached a level in internal testing that the team is confident that "the Neuralink device is ready for humans", and that the company is currently engaged in discussions with the US Food and Drug Administration (FDA) to get regulatory approval. Now, Neuralink has set a target of the first human trials beginning within the next six months. 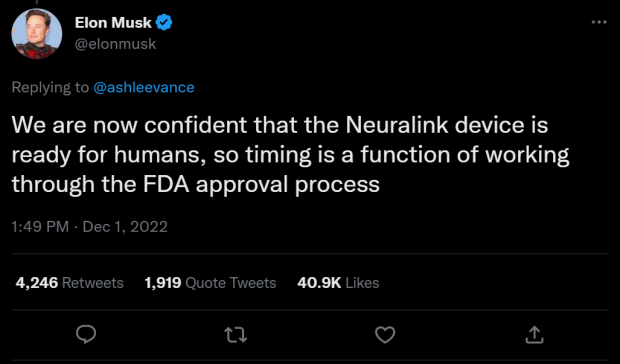 Furthermore, Musk said that with the company's technology, it hopes it will be able to help people suffering from paralysis and solve blindness for people. The Tesla and SpaceX CEO said that even if a person was born blind, Neuralink believes it has the technology available to give that person sight.

The event also consisted of Neuralink displaying how a surgical robot inserts the brain implant device into a dummy filled with "brain proxy" material, simulating what it would be like to have a Neuralink device inserted into a human brain. The demonstration showed the robot inserting electrode threads into the brain proxy material, which are the threads that will be used to stimulate the brain as well as capture any outgoing signals from it.

In other Elon Musk news, the SpaceX and Tesla CEO recently launched an attack at Apple, claiming that the company has pulled out of advertising on Twitter and is threatening to pull Musk's social media platform from the App Store.