Steve Jobs undoubtedly changed the technology industry forever by co-founding Apple, but would you pay a couple of hundred thousand dollars to acquire the Birkenstocks he wore when he did it? 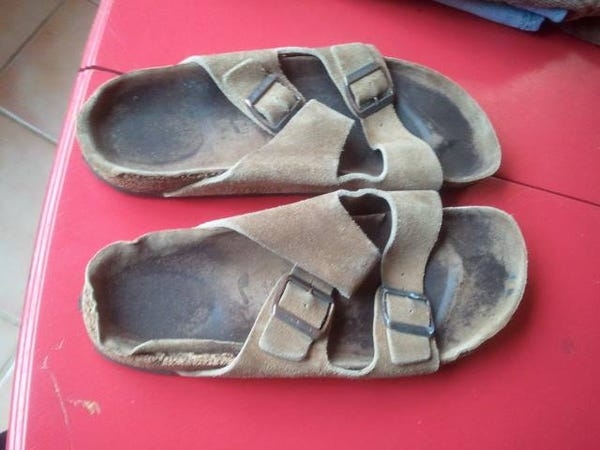 Steve Jobs was known for his plain and simple attire, while also being described as somewhat of a minimalist, according to BusinessInsider, that spoke to Mark Sheff, Jobs' estate manager, in 2016 when some items belonging to Jobs were being auctioned off. During that time, a Seiko watch along with a black leather jacket, both owned by Jobs, sold for $42,000 and $22,400, respectively. Additionally, Jobs' Birkenstocks were sold for just $2,000.

These Birkenstocks have since floated around to several exhibitions, and with each new owner, the price has seemingly skyrocketed as they were recently sold on November 12 at Icons and Idols: Rock N Roll auction, held by private auction house Julien's Auctions for a staggering $218,750. Reports indicate that organizers of the auction were only expecting the Birkenstocks to reach a price of about $60,000. Unlike most items that have experienced wear and tear, Jobs' sandals increased in value as that seemed to be what made them so attractive.

Julien's description of the Birkenstocks was "well used, but still, appear intact" and that the heel of the shoe still contained "the imprint of Steve Jobs' feet, which had been shaped after years of use." Furthermore, Julien's claims that Jobs wore these shoes while he and Apple co-founder Steve Wozniak constructed the very first Apple computer.

In other Apple news, the very first iPhone was recently auctioned off for 65 times its original price.