Automakers could sell up to 400 million more gas and diesel vehicles than what allows for global heating to remain under 1.5°C. It shouldn't come as a big surprise some of the largest automakers will be responsible for overshooting the projected target.

Japanese automaker Toyota will miss the mark by 63 million, German company Volkswagen will be 63 million over, and Korean company Hyundai will be 39 million over - and that has ramifications for global climate efforts, Greenpeace recently warned.

As noted by Benjamin Stephan, climate campaigner at Greenpeace Germany, in a press statement:

"Leading auto manufacturers, including Toyota, Volkswagen, and Hyundai, are transitioning far too slowly to zero-emission vehicles, which has dangerous consequences for our planet. As the climate crisis intensifies, governments from New York to Singapore are enacting stricter bans on diesel and petrol vehicles. If traditional automakers fail to electrify, they will lose out to newer, all-electric competitors and risk stranded assets. Toyota, Volkswagen and other leading automakers are on a collision course with the climate 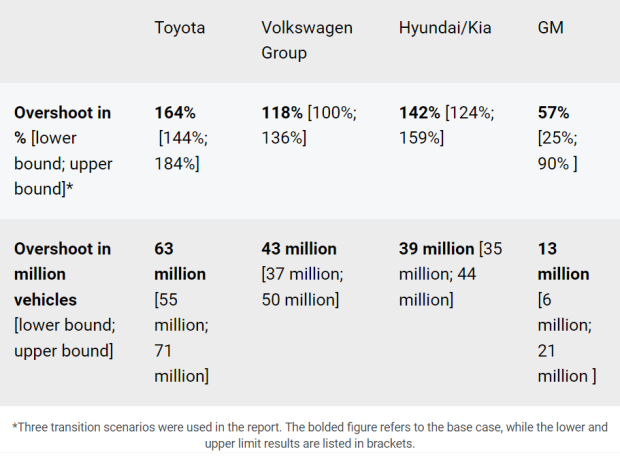 Earlier in the year, Toyota CEO Akio Toyoda received criticism for his company's slow response to the auto industry's transition towards EVs. As a clampdown on the sale of gas and diesel engines becomes more prevalent - in the United States and Europe - companies like Toyota will have no choice but to adapt.

Looking ahead, automakers are showing off current EV vehicles - and future concepts - as they need to entice hesitant car buyers to try an EV.